Hey gang! Sunday wasn’t terribly exciting but I was on the move the whole day which is why there was no post.  Sometimes I have to decide between blogging or spending time with Scott. And in all honesty, Scott’s going to win out every time.

I know you all understand.  Don’t worry, other than dinner, yesterday’s eats weren’t terribly exciting.

I busted out 4 slow ass miles yesterday running a 12:30min/mile. WTF?! I ran and busted out four miles so woot woot for that but 12:30, hells no.  I have to work on that and get my pace back to 10:30.  Yesterday was one of those days where I was running and thought I was flying but yet I could not get my HR up at all.  It stayed in the mid 150s and was not budging. I dealt with it. I was running on a Sunday morning so that alone makes me a rockstar. :p 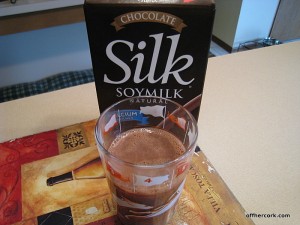 I had a big glass of CS and then Rocks and I went for our Sunday stroll.  When I got back home, I worked on Saturday’s post and got all my pictures in a row.  Then I was finally able to have some coffee and a snack. 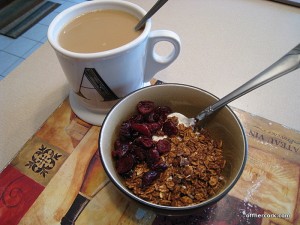 2% Fage+chocolate granola+cranberries. I might start making this my Sunday morning treat because I love it so much.  I fiddled around on the laptop and watched some Food TV where I saw a guy on Bobby Flay’s show (sorry y’all but BF does not do it for me. Actually none of the dudes on Food TV I find attractive. They need to get some yellow spice going on, Food TV is a little cracker overloaded IMO.) use a stout in a brine. While clever, if he were in my kitchen I would have sucker punched him in the gut.  I love stouts! Don’t go wasting good beer in a brine fool! Use a less than stellar beer. You’ll still get the same results without wasting it. That’s my PSA for you.

Scott got up and I got started on Sunday breakfast since his bellah was making angry noises. 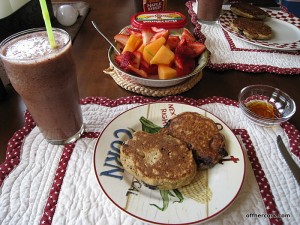 Raspberry pancakes I pulled from the freezer and heated up in the toaster oven. This is why it pays to make large batches of stuff!

Fruit, melons and strawberries (for Scott).

Sunday breakfast was quick and fabbo tasting! The smoothie was a bit tart but in a good way and it was creamy goodness.  The banana really helps with creaminess.  I usually only add it if I didn’t get a banana earlier in the day with oats or something else.  After brunch we headed outside for yard work. Blech. I pulled weeds while Scott was on bomb duty, then he mowed the lawn.

I showered and cleaned up the kitchen.  Then I made a quick snack because I was starving! 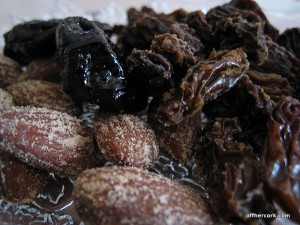 Two prunes, smoked almonds, raisins.  Love smoked almonds! I don’t eat them too often because of the salt but every so often they are a wonderful snack.  Scott was done with the lawn and I cut his hair quick before his shower.  Then I started getting dinner ready and put out another snack because I could not get satisfied yesterday. 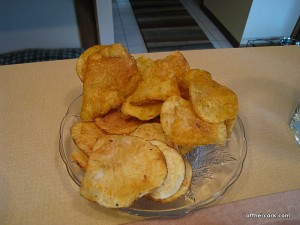 Chips! Jalapeno for Scott baked S&P for me.  I had a few while creating a fantastic dinner! 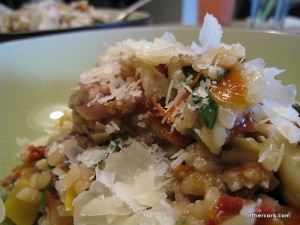 Risotto! Which was jam packed with all kinds of goodness: 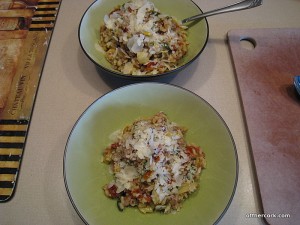 Sprinkled with a little bit of parm on top. HEAVEN! I love when I can have a big bowl of something and snug on the couch at the same time.  Bliss!

Later the evening involved these: 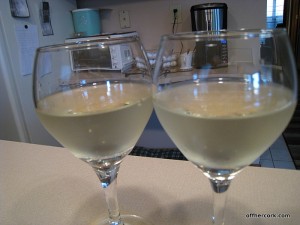 White wine that I also used in the risotto. It was fantastic and one of the best whites we’ve had in a while. So crisp and tart and refreshing.  And some dark chocolate (not all of that) that had almonds and cranberries in it.  MMMM! All while watching some Jim Gaffigan: Beyond the Pale which is the best! King Baby was pretty crappy. Then I zonked out in bed. Aside from yard work, it was a pretty awesome Sunday!