Hi lovlies!  Ever have one of those days where you are just going and going and you never seem to catch up on time?  That was me yesterday! Hence the no post. Whoops!

I got up early yesterday and started my run but during the run the back of my knee started hurting again.

Damnit! I was so bummed because it’s been a while since that’s happened.  In fact I don’t even remember the last time it bothered me on a run.  I had to cut my run short and maybe did 3 miles, I’m not positive. 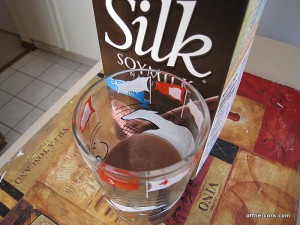 Small swig of CS and I was out with Rocky for his walk.  We got back and I changed and poured myself some coffee and made breakfast. 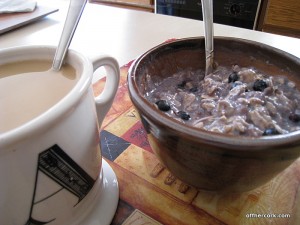 Oats for one!  Scott was sleeping away and I knew he wouldn’t be up for hours so I made oats for just me!

It filled my bowl and I thought to myself, there is no way I’m going to eat all of that!  You know I did and it only took me like a minute.

I worked on blog things and finally Scott got up.  I was waiting on him so that I could start cleaning the house.  I cleaned and got dressed for the day.  I made a super quick lunch because I needed to be on the move again! 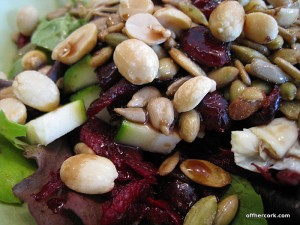 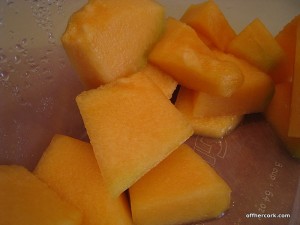 Cantaloupe straight out of the container like a savage. 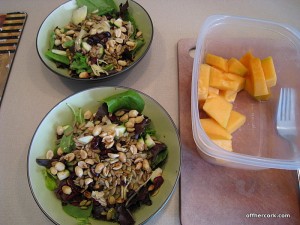 Eaten at the counter because I needed to eat and go! I was meeting a new friend! She’s a local blogger too and we’ve been chatting for a while and finally decided to meet up and chat.  We met at a Tea place.

It wasn’t quite what I expected but it was lovely! I thought it was going to be like a tea house where they bring you tea pots to your table and so on.  But it’s more like a tea cafe, a sort of coffee house type of deal. 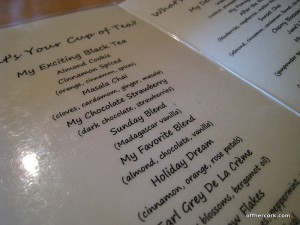 I got a black hot tea called My Favorite.  It had flavors of almond, vanilla, and chocolate(!). 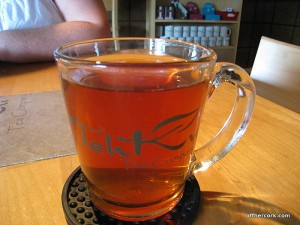 I could smell the chocolate right away!  It wasn’t an overpowering taste and the tea was very good.  Sometimes black tea can be a little bitter but this was not at all.  I would definitely get it again!

We chatted for a long time!  This is my second blogger meet so I was a little nervous at first.  It sort of made me step back for a second when someone I  just met already knows things about me because they’ve read it on my blog.  :p But I got past that really quickly.  It was like meeting an old friend.  I had a fabbo time and hope we can get together again soon!

After our meeting, I had trouble getting Scott on the phone.  He was walking around downtown Dublin doing his thing.  I figured I knew where he would be and headed over to the Star$ to see if he was there.  And he was!  We walked back to the car and Scott mentioned that he was getting hungry.  We decided to go out to dinner since we didn’t really go out for our anniversary.  I let him pick and he decided on Matt The Miller’s Tavern in Dublin. We saw a lot of Dublin today! 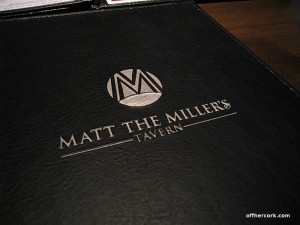 We walked in and got seated immediately in a cozy yet spacious booth.  Our server came over and Scott and I both started with water while we looked over the menu.  I tried to not drink my water down too fast but I didn’t quite get enough water yesterday and I was trying to remedy that.  Both of us ordered a drink. 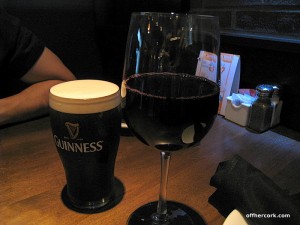 I got a merlot from Cellar #8 and Scott tried a Guinness again.  He said that this one was much better.  My glass of wine was huge!  It was like two normal glasses for me if I was having some at home.  Great pour for the price! 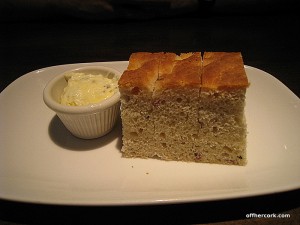 Our server asked us if we would like some fresh bread. Of course! I love when places serve bread.  She then brought out the best bread I have ever eaten at a restaurant.  I’m not positive but I think it was a focaccia.  It was so doughy and flavorful with a touch of saltiness at the end that I loved. Goodness it was so good! I had a very small piece because I didn’t want to get full but I could have easily eaten the entire plate. 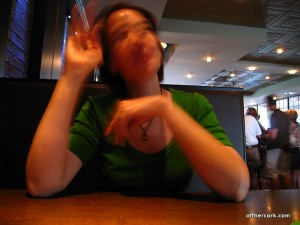 Here’s me telling a story to Scott and reenacting something I saw on Gangland. 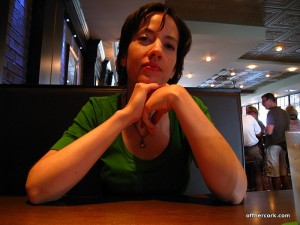 Yeah I said Gangland. What of it? 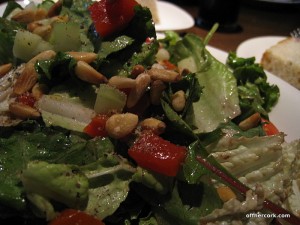 I started off with a small Balsamic Salad to go with my meal.  They have great salad selections here to choose from!  My salad had actual mixed greens and not just some romaine chopped up.  It also had roasted red peppers, grape tomatoes, cucumbers, and toasted pine nuts tossed in a balsamic dressing.  They dressed the salad and it was perfectly done.  Not too much, just lightly covered for some extra flavor. 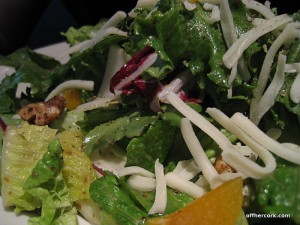 Scott got Matt’s salad for a starter.  It had mixed greens, dried apricots, spiced pecans (tasted like Christmas!) and white cheddar dressed with a maple mustard dressing.  I snagged a bite! Both salads were delicious and so fresh tasting.  Plus they came out really quickly! 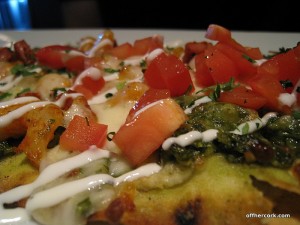 It wasn’t long before our entrees arrived.  Both of us decided on flatbreads.  Scott ordered the chipotle shrimp flatbread which had chipotle grilled shrimp, spicy ham bites on a pesto base.  Topped with pepper jack cheese and a small amount of lime sour cream sauce. 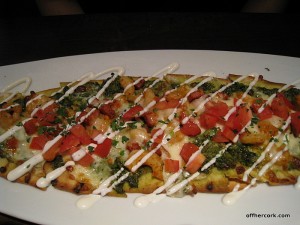 You know I had a piece and it was divine!  I loved it. 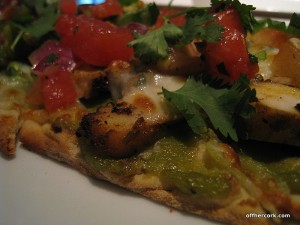 I got the flatbread special of the day because it sounded too good to pass up.  An avocado cream base topped with thin slices of chili-lime grilled chicken and moz cheese.  Then sprinkled with a watermelon salsa. 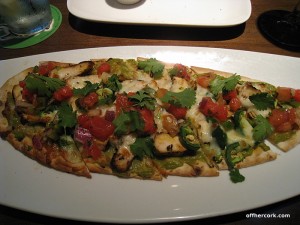 I have to say that the watermelon salsa made me a bit skeptical because I didn’t think it would work but it was perfect.  This flatbread was so light and fresh tasting.  This is my first flatbread experience and I was afraid it was going to be a heavy dish but it wasn’t at all.  Scott’s was a bit heavier but not so much that it would sit like a rock in your stomach.

Both of these dishes were perfect! And aren’t they gorgeous?! Love!  Scott wasn’t done and wanted a dessert.  He asked for the creme brulee and our server said that it was limoncello flavor.  Scott decided against it because he’s not a big lemon fan.  But then he changed his mind and said he would tell our server that he would try it when she came back with our box of leftovers.  However, when she came back she had a surprise! She said that she asked if there were any other flavors of creme brulee because there was a customer who wanted some but didn’t want the lemon flavor.  They said they could make a bananas foster creme brulee for Scott.  Score! 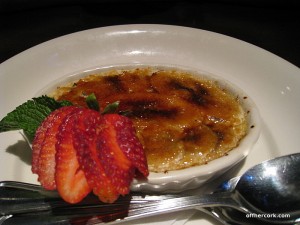 That’s awesome service right there!  Our server was amazing the entire time, knowledgeable and totally upbeat.  Plus she checked in on us often.  But to go that extra step to see if there was something that could be done to please a customer makes her and the service we experienced top notch.  That sealed the deal that we would definitely be back for repeated visits.

I had a small bite of the creme brulee (it’s not really my thing) and this was very good.  With sliced bananas on top and a crunchy sugar crust.

We wrapped up our dinner out and headed home.  We loved Matt the Miller’s Tavern so much and will definitely head back soon! If you’re close to Dublin and haven’t been, please check them out!

We tried to make a quick stop at Tuesday Morning but they close at 7pm. On a Friday. Say wha?!  So it was home to Rocky and a short walk for him.  Then I crawled in bed and read until 10pm when it was time for lights out!  I had one of the best days thanks to good eats and new friends.