Hi guys!  Last night after SF glass my bellah was a bit empty.  I thought for sure I wouldn’t need a snack but as soon as I plopped down on the couch to read while waiting for Scott, my belly rumbled.  Oookay, so I fed it. 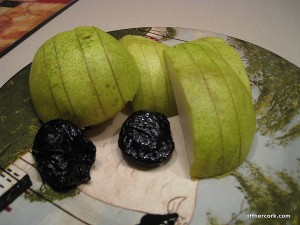 Up early this morning and got Rocky taken care of at which time I realized that it is ridiculously humid and hot outside.  Stinks for me because I’m currently sporting some Amazon legs, letting them do their thing so I can get defuzzed soon. Why it stinks?  Because I can’t run in my sweet running skirts but instead have to wear pants.  Fabbo.

I slapped some pants on, a tank and headed out the door for my shortie run.  It was hot and I was sweating buckets.  Thankfully I remembered my WonderWoman wristband today to help battle the sweat foes during my run.  My knee tightened up in the back a little bit, enough that I was concerned about it but not concerned enough to stop. 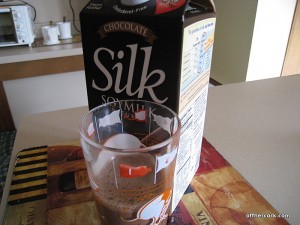 Finished my run, slammed two glasses of CS (BTW, a “glass” to me is exactly what you see in that pic. So two of those.) and was back out the door for Rocky’s walk.  If it was that crazy hot early in the morning it wasn’t about to get any better.  Best to get the walk done and over with.  Plus it is supposed to rain today at some point.

Once back home, I stretched and showered, then woke up Scotts for the day.  I came downstairs to a loverly cup of coffee. 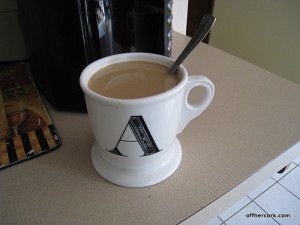 Then I headed in to stalk, read my favorite blogs and see what everyone is up to.  I was hungry and my tum was empty but I didn’t feel like eating anything.  So strange!  I finally broke down and has a small something. 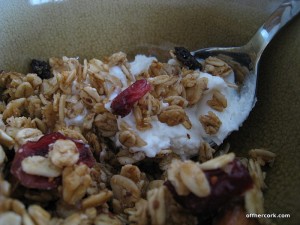 A wee bit of yogurt and granola.  It was late morning and lunch would be soon so there was no reason to have anything bigger.  I did some blog work and read some more blogs before heading into the kitchen to make lunch.

What seems to be my standard lunch now: 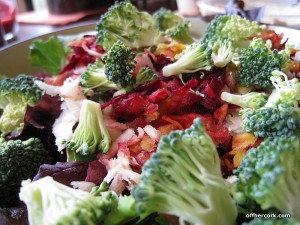 Topped with a wee bit of yogurt Caesar dressing. 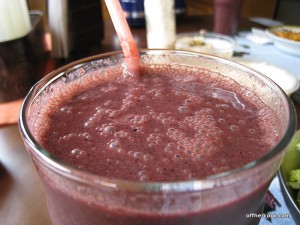 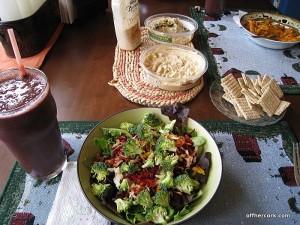 And then some crackers and garlic hummus on the side.  This lunch was beautiful and I totally ate too much!  I had a few crackers+hummus but didn’t even finish my salad.  I did finish all of my smoothie and that sent me over the edge into Too-Fullsville, yuck!  Now I’m all bloaty feeling.  I can’t stand that feeling, hopefully it will pass soon.

I love my salads but am missing some crunch! For me, a healthy diet includes nuts and seeds.  It helps keep my digestive tract clean and in tip-top shape.  I’ve been out of seeds for a while now and am totally missing them!  I usually put them on my salads for added crunch and texture.  Without them my salads feel so boring.  I’m going to need to get some seeds back into my life soon.

Now I must jet and try to catch up on emails and get some articles written.  Later guys!