Hi gang!  Scott and I got all fancy purty and headed out for date night!  It took me a while to get out the door though.  I have no idea what my problem is but for some reason when I try pants on at a store something happens to them in the time it takes to bring them home and wash them.  I went to put a new pair of dress pants on last night only to find that they were way too long on me.  Crazy long!  As in, I would need 10in heels just to be able to wear them.  They fit me in the store! Not only that but I have the same exact pair in brown that are fine.  What’s up with that Old Navy?! 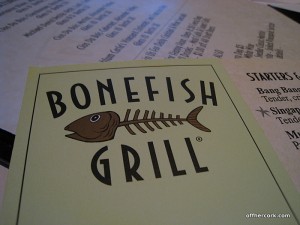 Now I was sort of in a debacle.  I finally got everything figured out and we were on our way.  We arrived and gave our names at the door as we already made a reservation.  We were taken to a very nice booth beside the window.  The booth was roomy and perfect.  I’d much rather sit in a nice booth like that than at a table in the middle of the room.  Scott wanted their Bang Bang Shrimp as an appetizer so that was already planned.  We started looking over the drinks menu. 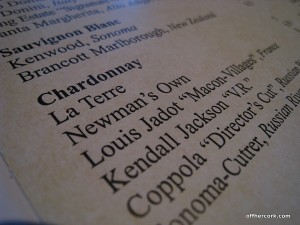 Normally I get red when out but this time decided to change things up and get a nice crisp white.  I love Louis Jadot but had not tried the Chardonnay before so I gave it a whirl. 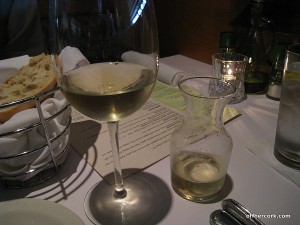 The thing I love about Bonefish is that your wine serving comes out in a little decanter.  In my opinion, it makes for a much more enjoyable drinking experience.  You can take your time and refill as you go making it seem like you have more wine.  Fabbo!  The wine was tasty, cool, and perfect. 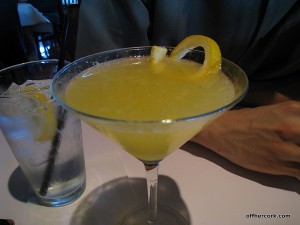 Scott got some sort of signature drink that was supposed to have lemon and cranberry juice and all sorts of fun things.  I had a sip and it tasted like straight up grapefruit juice to me.  Yuck!  I hate grapefruit!  I’m glad that I am not a mixed-drink person, picking wines or beer is so much easier!  Scott likes grapefruit and loved this drink.  Looking at the menu, I think he got his details wrong.  His drink above is the Ocean Trust Martini.  There was another drink that had cranberry juice which he probably just remembered and inserted into his description to me.  Silly guy! 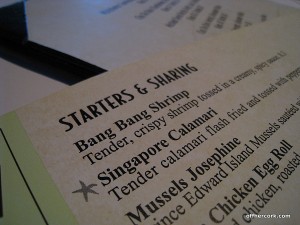 Bang Bang Shrimp for the start that came with chopsticks.  Lordy!  I pulled out the chopsticks and they were the tiniest things I’ve ever seen.  These were so skinny I think they are meant for kids and not adults.  Scott firmly said that I needed to get over my “chopstick issues”. 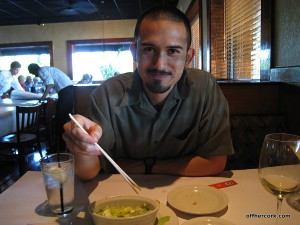 Whatever Asian guy.  I used them but it wasn’t easy! 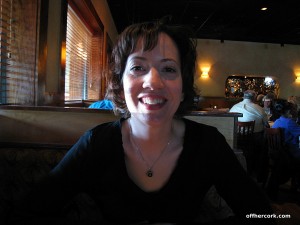 This white girl has a hard time with chopsticks.  Because the sunlight was coming right for my head, this is the best shot we could get.  Good enough! 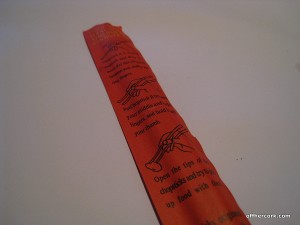 Have you ever seen instructions on a chopstick package before?  I haven’t, it was too funny! Also the pictures look like the person is eating chips with their chopsticks. 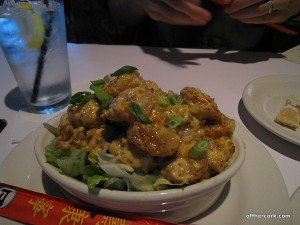 The shrimp was sort of a let down for me.  The description said crispy shrimp and I should have realized that crispy = fried, but I did not.  Because honestly you can have crispy anything without frying.  But like a trooper I tried it anyway because we ordered it.  The shrimp was very yummy, perfectly cooked so it was tender and juicy.  I was disappointed in the sauce though.  While it was super spicy just like the description mentioned, I did not expect it to be like a mayo-based sauce.  I had four tiny shrimp and then started picking at the lettuce and eating that with my chopsticks. :p  I’ll take the greens please!  I wouldn’t get this again as it’s not an Andrea-friendly dish.  We had the mussels the last time we were there and I think I’ll stick with those! 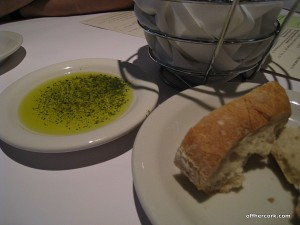 They bring bread and dipping oil out to the table.  Score!  I love when restaurants provide things like that.  I had two of the smaller slices of bread dipped in the oil.  The oil was just okay and could have used a bit more of a kick to it.

Because I wanted some more greens in my day, I ordered the house salad. 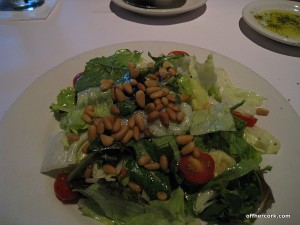 With no olives and no hearts of palm.  I don’t like either and I’m still researching whether hearts of palm is a renewable resource or not.  I’ve heard that it is not but that certain organic brands are because they harvest theirs differently.  Since I don’t know for sure and don’t prefer the taste of them, they are out.

That leaves me with lettuce, tomatoes, and a whole lotta pine nuts.  The salad was light and the dressing very refreshing.  It definitely could have used more mixed greens and less romaine.  I ate a good bit of the salad but left a lot of romaine and pine nuts behind. 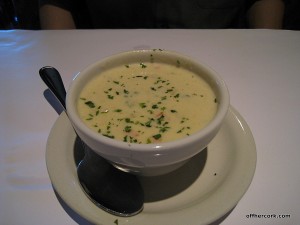 Scott ordered the crab corn chowder which I tested a small bite to make sure it was edible for him.

It was very good!  Reminded me more of a cream of potato soup.  Lovely and huge chunks of crab throughout. 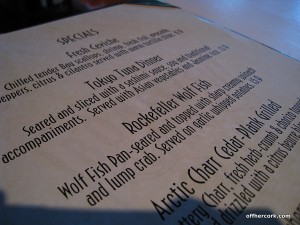 I had one of the specials for my main entree.  Rockefeller stuffed Wolf Fish.  Wolf fish with creamy spinach and crab alongside some garlic mashed potatoes (or restaurant speak, “whipped” because that’s more fancy). 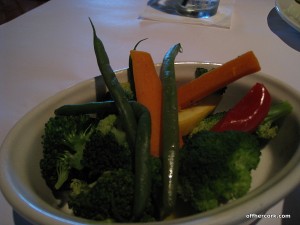 I also ordered some steamed veggies no butter on the side for extra veg because whipped potatoes don’t cut it.  There was a bottle of olive oil at the table so I drizzled a little over my veggies and added a small amount of sea salt and pepper. 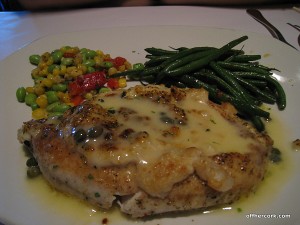 Scott had the Imperial Longfin which is stuffed with crab,shrimp, scallops and baked.  There’s also cheese in there that the menu leaves out.  I have no idea what the cheese is though.  For some reason I want to say it was a brie but I don’t really know.

Everything was super yummy!  I was very happy to see that the creamy spinach was not spinach drowned in a heavy cream sauce but spinach with a hint of cream added to it.  Made for a much better taste and appeal!  I had a few bites of the potatoes but didn’t want them so they were pushed to the side for Scott.  The wolf fish was a very fishy tasting fish which surprised me.  I expected it to be a little milder in taste but I love fish so it wasn’t an issue.  I ate half of that and almost all of the veggies.  I left a good bit of broccoli behind because there was a ton of it and I was broccolied out.  I had a couple bites of Scott’s dish and it was so good but such a heavy dish.  Whew!  I could not imagine eating that entire thing because his portion was huge!  And he did not but brought a good bit back.

It was a nice time with fabbo company.  Our server was very nice as well, I’m talking to you Daniel.

He asked why I was taking all the pictures of food. :p  I mentioned I was a food blogger and handed him a card (which I need new ones, I don’t like the Foodbuzz ones.  Sorry Foodbuzz!).  So we’ll see if he stops by.  I’m watching!

After dinner I was complaining about the one downside to going to dinner, that we get dressed up and head out for an hour or so and then it’s right back home.    I’m not looking to get dressed up everyday but for more than an hour would be nice.

Scott: Do you want to go somewhere?

Me: Where are we going to go?

Scott: I don’t know. What about World Market to look around?

Me: Oh yes! We haven’t been in ages. Let’s go there and shop!

Scott: I said look around.

So we putzed around World Market and obviously it has been a while since we were there because now they have their own line of food and beverage products!  I picked up some cute knicknacks and we got some wine.  Then we left because they turned the music off so I’m assuming that was a subtle message to get out.

Back home and in jammies I started crashing hard and I stayed up too late watching shows.  Scott poured us a small glass of wine. 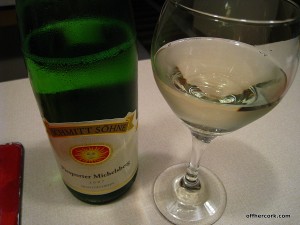 I had two sips and was done.  I was tired, feeling a little full, and just wanted to be in bed so I didn’t drink it.  I headed up around 11pm ready to zonk out.  That wasn’t to be though, I had a bit of a rough night.  Which I’ll explain in a later post.  I will say, lesson learned.  Lesson learned.