Hi guys!  I apologize for lack of post last night but I was too pooped and admittedly I wanted to focus on Game 4 of the playoffs!  But I’ll get to that in a second.

I wasn’t too terribly hungry before leaving for conditioning class this evening so I had half a Luna s’mores bar. 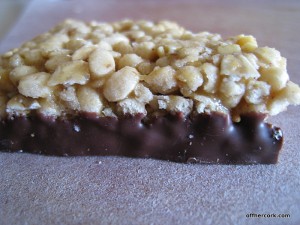 It’s okay but I probably wouldn’t get it again.  It sort of tastes like a dipped rice Krispy treat but with the chalky aftertaste of added protein.  Then we were off to class which again kicked my behind.  The thing I love most about conditioning class is that it’s different every week.  We’re not doing the exact same thing, therefore your body doesn’t get used to things and zone out.  Conditioning class, to put it in perspective, think working out with Jillian for 45 minutes.  Except substitute weights with hitting a heavy bag.  We do cardio, strength (with body weight like pushups, squats, and so on), and then heavy bag work.  Heavy bag work includes both punching and kicking.  For example, to start things off yesterday we had to throw 125 punches and we had two minutes to do it.  But the goal is to do them fast and strong.  I got mine done in 50 seconds.  Oh snap!

I was still undecided about dinner when we got back home.  I took a step back and thought about what I really wanted.  Veggies.  Roasted veggies and lots of them.  I normally load my pizza up with veg but I didn’t really feel like the heaviness of pizza last night.  I decided on something easy that would be exactly what I was looking for, roasted veggies with brown rice.  Easy, quick, and light meal. While the veggies and rice were cooking, I had a wee snack. 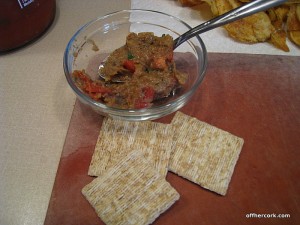 365 Triscuit knock-offs and some eggplant dip which tasted exactly like the happiness of pasta salad minus the pasta.  So refreshing and yum!  Once this container is done, I’m going to try to make my own, it can’t be too hard.  The chips in the back are Scott’s! 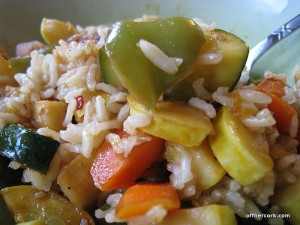 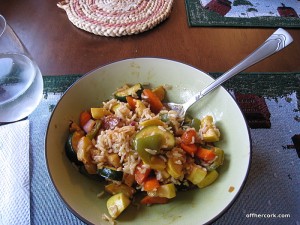 All cut into bite sized pieces.  I drizzled them with some teriyaki sauce and buffalo sauce.  Sounds weird but they came out sweet and spicy, very yummy!  I got full right away and didn’t even finish my bowl. FYI, my brown rice of choice is brown jasmine.

Then we sat down to watch the game and I had a small glass of red wine. 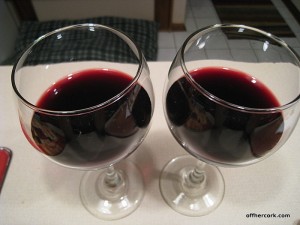 The game was fantastic!  It was great hockey played by the Pens and I was beyond thrilled.  Rocky however was not so excited with all the yelling.  Around the second period I got a bit munchy.  I wanted some cheese and fruit. 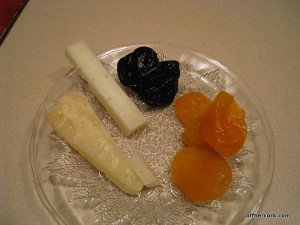 I ate all the fruit and 1/2 of each slice of cheese.  I had another small glass of red with the snackie.  Finished the game which was amazing and the Pens won!  That means they are tied with Detroit right now, both have won 2 games each.  Honestly Detroit looked very overwhelmed with the Pens and like they had no clue how to handle them.  Perfect!

After the game I crashed out in bed!