Hi gang!  We got back a little bit late from SF last night and I was starving!  What I wanted was some PB so I made a small snack. 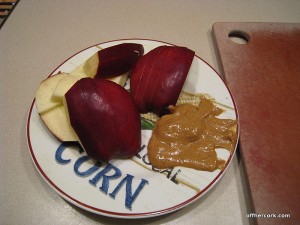 Red delicious and PB which I just mixed together so it created a big blob on the plate.  Scott split this with me, which meant I wasn’t completely full or satisfied. 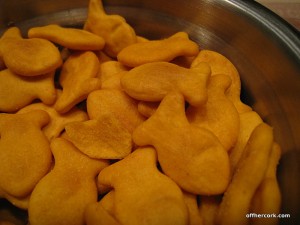 I had a small handful of fishies and called it good.  Fishies were consumed while watching Family Guy and the episode was Family Guy’s remakes of three Stephen King movies and they were hilarious.  I thought Stand by Me and Misery were done much better than Shawshank but that’s just me.

At 11:30, I went to bed and laid there for 1/2 an hour trying to fall asleep.  Yikes!  It was not a good night.  I had this dream where I was part of a construction crew that Sawyer was leading (so weird!) and we were all ticked off because a worker had done something terribly foul in the porta-potty.  These were supposed to be high tech super ventilated deals but whomever was last in there dropped a bomb and the smell would not go away.  It was so bad that I actually woke up.

Only to find out that Rocky was farting like crazy so much that my subconscious had to create a dream around it!  Lovely.

This morning I very sleepily got up at 7am to crazy humid weather.  We had a storm last night with some serious lightening and not so serious thunder and hardly any rain.  I thought it was supposed to cool things off but it only made things worse.  Ick!

I debated about going for a run today thinking of my leg.  However, like Caitlin, I too always regret not working out and never regret a workout.  I changed into running clothes and headed out the door.  Yeah it was humid and even though my shirt I had on was very thin, I was dripping with sweat.  It was awesome.

I did just a little over 2 miles.  I was tired and it was hot so my run wasn’t too fast.  My leg did okay, it felt a little tight but nothing that indicated I should stop.  I still kept the run short to be on the safe side. 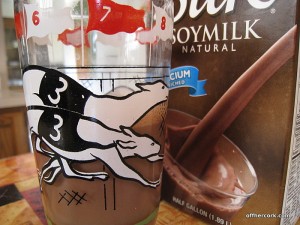 I downed 2 glasses of CS and then rolled my leg a bit, stretched, and showered to get the grime off.  Once again I forgot to make cold oats (boo!) so it was another yogurt mess this morning. 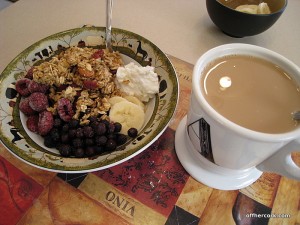 Same deal as yesterday but with addition of banana:

With some very yummy coffee!  This bowl was a bit too much for me and I had some leftover that I saved for Scott.  After breakfast, I leashed up Rocky and took him for a walk.  It was even more hot/humid by 10am so our walk wasn’t too long but long enough! :p

I did some work things and finally called it time for lunch.  I was starving!  I love yogurt messes but they don’t hold me over well at all.

I needed a huge salad so that’s what I made: 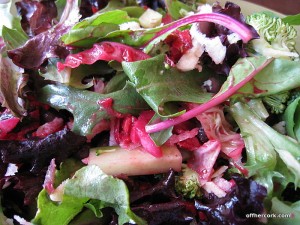 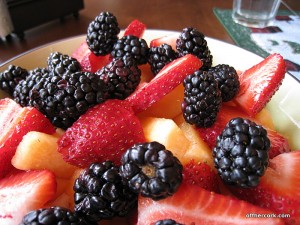 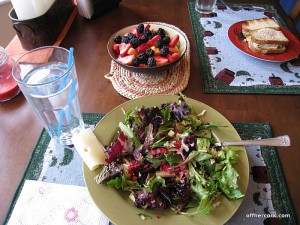 And a slice of swiss just for kicks.  Once everything was assembled, I thought for sure that my eyes were bigger than my stomach and I would not be able to finish the salad.  Wrong!  I totally kicked it and kicked most of the fruit.  Whoo!

I’m wondering if today is Butthead Tuesday?  First I had a run-in with that lovely lady as I was running this morning.  Then when I was out walking with Rocky, we almost got run over by some kid on a bike.  She was flying down the sidewalk behind us and I had no idea she was even there.  I just happened to be on the edge of the sidewalk because Rocky was peeing.  I glanced behind me and whoosh she goes flying by.  She wasn’t slowing down, going slow, or even paying attention to us.  What if we were in the middle of the sidewalk?  She could have hit us.  She just barreled on through and then kept going across the road without even looking.  She didn’t even stop at the corner, she barreled on through across the street.  Good lord.  No helmet and flip-flops on her feet.  Totally not safe!

I’m holing up inside until it’s time for me to head to MT! :p