Hi guys! Check it, last night after posting about dinner I headed up straight to bed with a new book.  I read for a little while and then by 9:30pm, I was passed out sound asleep.

I need tons O’ sleep unlike my husband who rolled into bed at 4am.  Good lord.  Apparently Grandma is married to a college kid.  At least there were no empty beer cans and smashed up pizza boxes laying around the bedroom when I got up this morning.

I was going to get up at 6am but you know that just didn’t happen.  I was up before 7am which I’m just going to call productive and accept.  I took care of Rocks and then was out the door for my run.  Today was one of those days where sleeping seemed like a much better option.  But like other bloggers, I don’t ever regret a workout but will regret not working out.  I headed out telling myself to listen to my body and let it tell me what it wants.

It told me that it did not want to run 3.5 miles today.  My grandma legs got kicked pretty good last night at MT and they were sore and tired this morning.  I cut my run short and did about 2 miles.  As soon as I get an armband for my iPhone (recommendations anyone?) I’ll start using my new running app that I got and I’ll let you know how I like it! 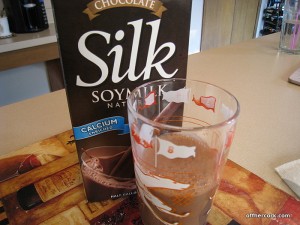 I drank some CS and was back out with Rocks for a walk around the ‘hood.  The minute we got back home, I headed upstairs to shower.  While it wasn’t terribly hot this morning, it was humid. Yick! 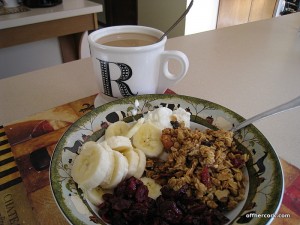 I made breakfast as soon as I came back downstairs.  I wasn’t super hungry but my stomach was empty and ready for food.  Ever have that feeling where you know your digestive tract is just hollow and needs some fuel?  Breakfast was yogurt with some sliced banana, granola, and cranberries.  With a mug of coffee that was super tasty!

I got busy doing officey stuff and working on my hummus review.  I had another mug of coffee for extra brain fuel.  Shhh! It does too work!  Once I got things a little more organized, I headed into the kitchen where I made some vegan cookies for the first time.

Eat, Drink, and Be Vegan has a fabulous baking section and with a seminar coming up this weekend, we’re going to need snacks.  I decided to make some cookies and test them on some unsuspecting SF dudes tonight to see what happens.  I’ve been wanting to make vegan cookies for a while now.  Partly because I want healthier cookies on the rare occasions that I’m craving a cookie and also because one of the guys at SF has a dairy allergy and cannot ingest anything dairy, that has touched dairy, or even looked approvingly at dairy.  I like making snacks for class sometimes and for seminars but I was having trouble making things he could eat.

With research and food blogs I’ve been introduced into a whole new world of baking!  It’s Awesome!

I made two kinds today, the Chocolate Chunk Spice and the Super Charge Me cookies.  Both had alterations to them, for instance I don’t have spelt flour or barley flour so I used a combo of WW pastry flour and unbleached all-purpose flour.  I also used vegan chocolate chips for the chocolate chunk cookies.  And oatbran for the Super Charge me because I don’t have quick oats.  I also used a very light olive oil instead of canola because I don’t have canola on hand.  I do have vegetable oil but honestly I didn’t really want to put an empty oil into these just for moisture.  If I’m using oil then I want something that is going to provide me with some benefits.  Light olive oil, meaning the color is light resembling vegetable oil, doesn’t alter the taste of things and is a great sub. 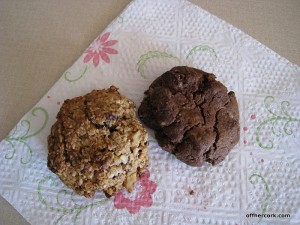 Both turned out really well!  The positive to vegan baking is that whenever you want to make something you can immediately start.  There is no waiting for eggs and butter to come to room temperature.  One negative is that the cookies are a bit dryer and could stand to have a little bit more moisture to them.  That could be from my using WW pastry flour though.

If you’re curious, I was able to purchase vegan chocolate chips at Whole Foods and it is their 365 brand.

After baking, I needed to eat something.  I wasn’t super hungry, but again needed something to fill my bellah.  I started off with a smoothie: 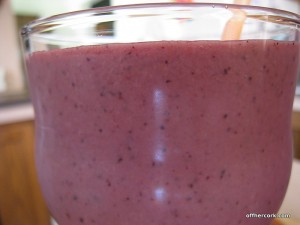 Then I made a snacking plate to pick at: 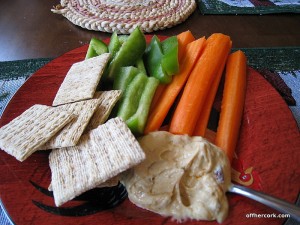 Baking is hard work! Someone needed a break! 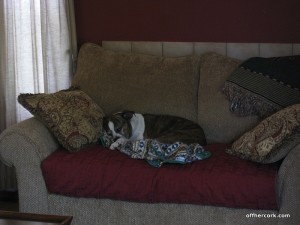 After the kitchen was cleaned up, I went through and organized the house a little bit. 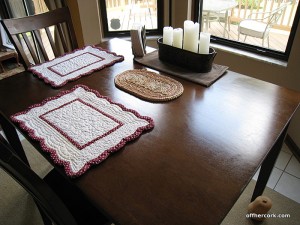 One of the things I did was clean off the dining room table.  I dust it every week and then every few months I give it a good wipe with some orange peel oil furniture polish.  It makes the table all purdy again!

For dinner, I wanted something simple that would provide leftovers for later in the week.  I tossed a few things around but kept coming back to Lentil Tacos so that’s what we had! 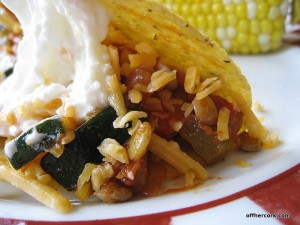 Lentil Taco with a bit of cheddar and some Fage “sour cream”. 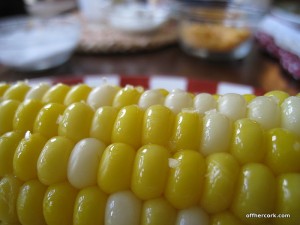 Corn on the cob for a side with a smidge of butter and some kosher salt. 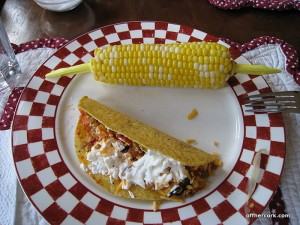 Mmmm!  Scott proclaimed, “This is delicious!”, so I must have done okay.  :p  I added a chipotle pepper + some sauce in this time and whew it was spicy! Almost too spicy for this grandma.

I was still a little hungry after eating the taco and corn, and I went in for an unprecedented second taco!  I never have two tacos, it’s just too much.  But given that all other meals today were light, two tacos is just peachy.  I reminded myself that I didn’t have to finish it if I got full or decided I didn’t want it.  I had about half and the rest went to Scott bringing him up to a grand total of 3 1/2 tacos. :o

Alright guys, I’m off to read for a few minutes before heading off to SF class!