Hi guys!  I was wiped out last night and crashed in bed at 10:30pm.  Where I had a glorious sleep!  I haven’t slept that well since the weekend before probably.  Ah it was lovely!

I got up this morning at 7am to get the day started.  Scott and I had to run to the AT&T store and we wanted to get that done early.  I started off with some coffee. 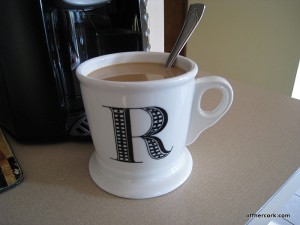 YUM!  And did some bloggy stuff and correspondence stuff.  Then I got Scott up and showered to make myself presentable.  Looking back on yesterday’s eats I realized I didn’t get any fruit.

So I needed to rectify that the best way I could with what I had on hand. 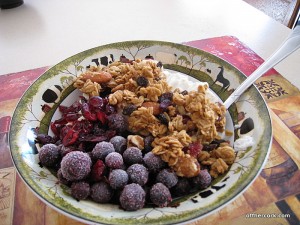 Yogurt mess with sliced banana, frozen blueberries, and cranberries.  All mixed with some fruit and nut granola.  I snagged another cup of Joe for breakfast but only had a few sips of it.  Not long after breakfast Scott and I were out the door to the AT&T store.  Here’s the deal:

Yesterday by 9pm we still did not have our phones activated.  We did all the stuff suggested, called the activation number, checked our account, restarted the phones, and took out the SIM cards.  Nothing.  I don’t know whether it’s noteworthy or not, but our account did not reflect new phones.  Only had our old phones and plans listed.  Anyway, Scott decided to call customer service and get them to activate our phones.  In hindsight he probably should have waited till this morning because at 9pm on a Sunday I doubt AT&T has their Alpha Team running the show, if you get my point.

Anyway, he talked to someone and she activated his phone and said that it should work with both lines.  We tested my phone and nothing.  She then activated my phone and Scott’s phone went dead.  Then she proceeded to tell Scott his SIM card was now unusable and we would have to go to an AT&T store to pick up a new one.

Scott was so mad.  I know because he was totally quiet.  When he gets slightly cranky he’ll complain and swear and all that stuff. But when he’s really seriously mad, he doesn’t say a word.

It took us a long time to actually find the store today because we didn’t realize it was IN the mall.  We thought it was next to the mall.  Thanks to my handy iPhone I was able to double check addresses and find out where we needed to be.  We explained the situation and the guy gave Scott a new SIM card.  He said that there was a glitch with pre-ordered phones that were sent directly to the owner.  For some reason the SIM didn’t want to work.

We explained how mine worked okay and just shrugged it off as an odd occurrence.  We left the store and while we were still in the mall, Scott tried calling my phone and he got no connection.  I tried calling his and nothing.  Then I realized that my phone stopped working and I had no service.  In my mind I went to my happy place while we walked back to the store so I could get a new SIM card.  Once that was done, Scott and I both used the phones to call each other and everything was hunky-dory.

We get home and I start fiddling around with my iPhone and as I try to connect to use some apps, my phone tells me it can’t do that because I have no data plan associated with my phone.

At this point, I decided to make lunch before my Hangry mood turned to Homiciungry. 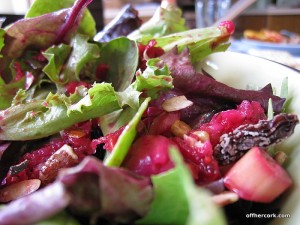 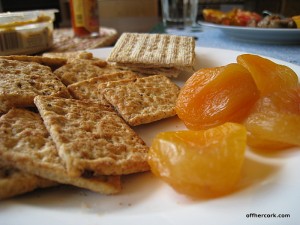 Crackers to dip into hummus and some dried apricots. 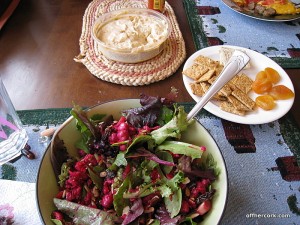 YUM! We are running terribly low on fresh produce in this house and it’s starting to make me antsy.  I’m trying out a new app on my phone to maintain grocery lists, it’s called Shopper, and it was only 99 cents!  So far not too shabby.

I ate my lunch, started another load of wash, and then headed out the door to take Rocks for a walk.  I needed to step away from technology for a bit.  I also stomped my foot and told Scott to have it all fixed by the time I got back.  But nicely and less dramatic because it’s not Scott’s fault, it’s AT&T’s fault.

It was so hot outside!  I only took Rocks for a short walk because he and I would melt otherwise.  When I got back everything was fixed and Scott said the CSR he spoke with at AT&T was very nice and helpful.

Turns out that the guys at AT&T store only activated the phones.  Didn’t update our account nor did they activate any sort of data plans to go with our phones.  Which is why we could call but not do anything else.

And now we both have working phones, data plans, and service.   That was way too much drama for me over a phone.  Now it’s over and I’m looking forward to enjoying my new toy!  He still needs a name.  Hrmmmm