Hi gang!  Last night there was this: 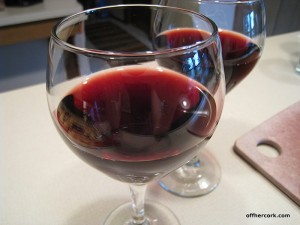 Oh yeah!  There’s currently a 1/2 piece of panettone left of my stash and I’m thinking of killing that tonight.  That way my stash is gone and outta here.  I’ll be pining for more till the holiday season. BTW, the plate is for both of us and the slices are then made into bite-sized pieces.   That way it looks like more and takes longer to eat.

While snacking Scott and I watched Wanted.  Holy schnikes this was one of the worst movies we’ve seen in a long time.  I don’t even know how we managed to watch the whole thing because within the first 10 minutes both of us were discussing just turning it off.  Ugh there was 2 hours of our life gone.  Then we finished the last hour of 24 which, what?  It was totally anticlimactic which leaves everyone frustrated and annoyed.  There was too much Kim although thank goodness she was properly dressed and not in boobtastic outfits.  But still: Kim; make her go away.  And it seemed like it was going to continue into next season.  So that means more Renee and more Janice.  Ew.  Hey I like Janeane G. as much as the next person but there’s only so much fake pouty lips and hair-parted-straight-down-the-middle I can take before I get a little cranky.  I totally called Tony’s plan ages ago and they should have let him kill that guy.  I guess my point is, the ending didn’t seem like an ending and left me a little confused and blah.

Then I crashed out in bed which was before 11pm but not much before.  Rocky was having no sleeping in today even though it’s Monday rest day.  What up Rocks?  I got him taken care of and poured myself some coffee. 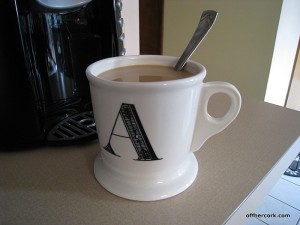 I came in and checked mail and did some online shopping.  Nothing fantastic, it was actually stuff for Rocky.  I was thankful for my computer running today because yesterday I rebooted and it wouldn’t come up.

Like wouldn’t even register it was on even though it was clear it was running.  Weird!  That’s when I stomped my feet and demanded Scott to fix it because I am not the technical person in the house.  I can do some things but everything else falls to him.  He fixed it like a rockstar and then backed up my machine because whoa that was stressful.

After shopping, I woke up Scott and made some breakfast. 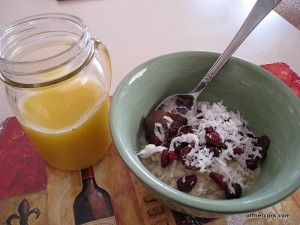 Oaty oats with super basic mix-ins, cranberries, coconut, and dark chocolate PB.  Then I got dressed and took Rocks out for his walk.  It was already starting to be a hot one.  Whew!  When we got back home I changed into shorts and started the Monday ritual of laundry.  I was getting all excited because a package was supposed to arrive today.  Nothing big, just some fun stuff.  When I checked the tracking status again it changed and said delivery for tomorrow.  Booo!  I hate that especially when it says that it’s been in Columbus since Friday.  *grumble*  I know it shouldn’t have but that totally killed my Monday joy and gave me the blahs.  After realizing that I wasn’t to have any fun deliveries today I headed into the kitchen to make lunch.

I’ve been craving a chik’n patty for a while now but haven’t made one because I didn’t want to eat a sandwich.  I love the idea of sandwiches and I know they are tasty but for some reason they just don’t appeal to me.  I’m not sure if it’s all the bread or what.  The craving for said patty was strong and not going away so I decided to cube it and have the patty on top of a salad. 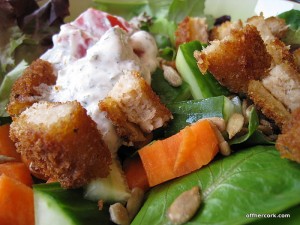 With a dollop of leftover dill spread I made for yesterday’s smoked salmon. 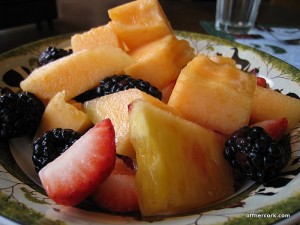 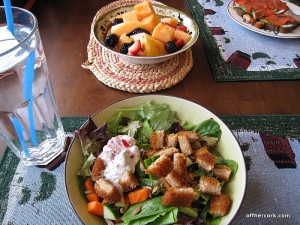 After lunch it was more laundry and other chores that needed attended to.  Then I finally bit the bullet and signed up for my first race since my half.  Eeek!  It’s just a 4-miler in nearby Dublin and it kicks off the Irish Festival for that weekend.  It’s in the evening and I believe there is supposed to be pizza and beer afterwards.  Oh yeah!  It’s supposed to be just a fun little race for families and open to runners and walkers.  I figured what the hell, by the end of July I should be running well over four miles so this would make a nice little race to run.  Hooray!  I’m pretty excited for it actually.

Then I putzed around trying to figure out dinner.  It was toasty and I just did not want anything “hot” to eat.  As much as I love salads, I had one already so that was out. Time was running out and I had to get my butt in gear.  I eventually decided on some hot things and a cool thing. 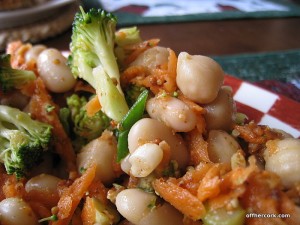 Cool: Bean salad.  I have also been craving a been salad for what seems like ages now.  It has canellini and chickpeas with broccoli, green onion, and shredded carrot.  With a dijon vinaigrette dressing. 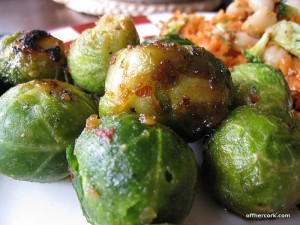 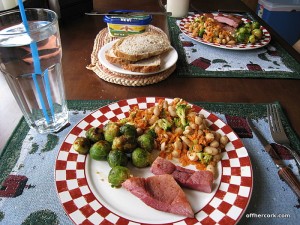 Hot: Ham steak! Actually this was more for Scott than me but I did have a small piece.  Thankfully we have access to local farms that treat their animals well and can purchase high quality meat products. I’m sparing you the closeup pic because it’s not all that attractive. :p I also had 1/2 a slice of multigrain bread with butta.

Tasty dinner!  And the best is that the ham steak and brussel sprouts were easily tossed in the oven.  No hanging out over a hot stove and very little in the way of dinner cleanup.  I would have been fine eating just a huge bowl of bean salad but figured my body and my SF training buds tonight would not appreciate such a dinner. I decided to cut the bean consumption down a bit.

Alright guys, Monday is almost at a close.  A few things to get through and then it’s on to Tuesday!