Hey gang!  So Friday night we watched a very intense Game 7 here at the HQ.  Drinks were involved. 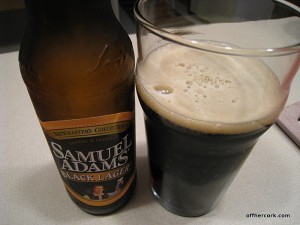 Scott opened a Black Lager (snicker) but I literally had maybe 3 sips?  The brats, while delish, were sitting a little heavy in my tum and the beer made everything bloated and icky so I passed.  Brats while tasty are not Andrea friendly which I made sure to make note of.  I can have a few bites and then this girl is done.

We watched as the Pens defeated Detroit.  Oh that’s right, Pens are The Stanley Cup Champions (hockey equivalent to the Super Bowl which Pittsburgh also holds. Oh Snap!)!!!  Hooray!  Detroit and their fans can kiss my ass.  The Pens had the unfortunate situation of winning the cup in Detroit meaning it was Detroit fans watching the ceremony and they decided to be dinkuses and boo.  Classy Detroit.  I understand you’re not happy but damn get a grip.

And Hossa who used to play for the Pens but left because he wanted to be on a team “that would win the cup”, moved to Detroit.  He turned down a crazy amazing contract with the Pens to go play with Detroit for pennies.  He can suck it and I hope he’s feeling like butt.  And that’s all I have to say about that.  You can now rest easy that you probably won’t hear about hockey again till Septemberish. 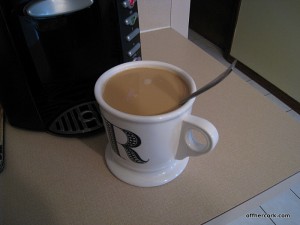 Saturday morning, bright and early I got up to some lovely coffee and a awesomely cool morning.  I sat down and did something, read blogs I think.  Check mail and all that happy computer time stuffs.  When Scott got up I made breakfast. 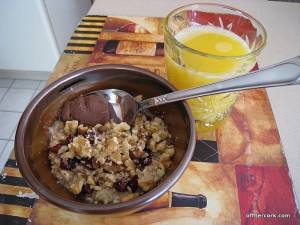 Oats!  Basic oats with crushed walnuts, cranberries, and some dark chocolate PB for mix-ins.  I also had some OJ just because I felt like some.  Then I sat on the couch with my love and ate breakfast.  Normally we go our separate ways, or the TV is on, or we’re on the computers.  But not yesterday, we just sat on the couch and chatted eating breakfast while a nice breeze blew in through the open sliding glass door.  Such a nice time!

Then we went to MT and beat the snot out of each other.  I actually haven’t partnered with Scott at MT for a while and it was nice to be able to get in there and really go house on him during partner drills.  With him I can go super hard because I know he can take it and he dishes it right back.  I was a sweaty exhausted mess after class and it was beautiful.  Thanks loves!

After class we came home, ran Rocks around the block and then showered.  Lunch was totally all over the place.  I thought I was past my “proper meal” issues but apparently not.  I was hungry and wanted something quick.  What I really wanted was a smoothie and yogurt + granola and fruit.  What I actually had was this: 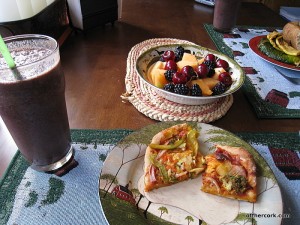 Because pizza would be more of a “proper” meal.  I tried having a smoothie, leftover pizza, and some fruit.  The smoothie mix was a little diff:

Scott had leftovers from Friday night.  I only ate the smallest piece of pizza on the plate because it was not what I wanted.  I drank slightly more than half the smoothie.  I picked at the veggies on Scott’s plate because that tasted better. 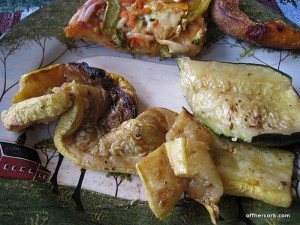 Except I ate more zucchini than yellow squash because that tasted sweet for some reason so I wasn’t digging it.  Finally I got up and went about my bidness.  About an hour or so later, I was still hungry.  Naturally because lunch was nothing. 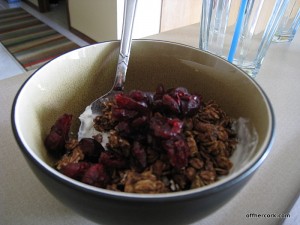 And I had what I wanted all along, yogurt + granola.  It was satisfying and filled me up.

Goodness!  Then some stuff came up that Scott and I needed to take care of unfortunately causing us to have to cancel plans with Allison who was in town for her brother’s graduation.  I felt like a butt but there will be another time when we can meet I’m sure of it.

Finally Scott and I were able to settle down and relax for the evening.  I decided to make some seafood risotto for dinner.  Easy and quick!  First there was a snack because I was craving some cheesy-cheese. 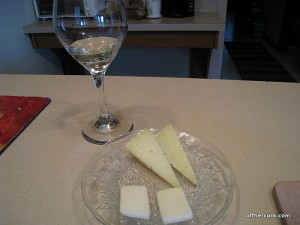 On the plate was some manchego and raw goat’s cheddar.  The cheddar was just okay.  The other raw goat cheese we have that is supposed to resemble a manchego is much better.  This, while okay, didn’t have too strong of a flavor.  And the manchego was also just okay.  I don’t think I’ll get it again.  I had a wee splash of wine to help wash the cheese down of which I had a slice of each. 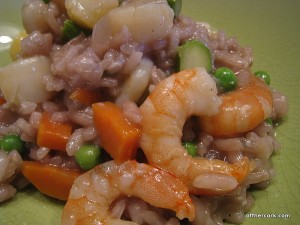 There was shrimp and bay scallops in there along with some carrots, onion, peas, and roasted asparagus.  Just a touch of parm, not too much since we already had cheese.

I honestly had just a small amount of this because I wasn’t terribly hungry.  I guess the granola was doing it’s job!  We watched TV trying to finish up the 24 season, we’re close!  While watching we had: 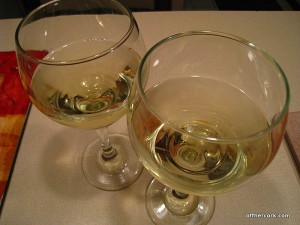 A glass of wine and then with the second glass there was this: 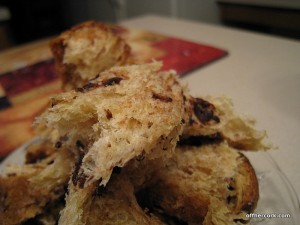 Dark chocolate panettone.  Mmmmm, I pulled out some from my stash in the freezer.  I wasn’t going to have any because hello risotto and bread, I don’t need that many carbs.  But whatevs, I had some and it was damn tasty.  Then I hit the sack and crashed out.