Hi guys!  Last night after the loverly pizza, I needed something else. 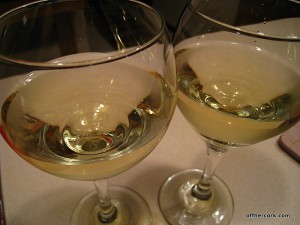 Two things, a small glass of wine and chocolate.  The chocolate was new to me and I couldn’t wait to try it! 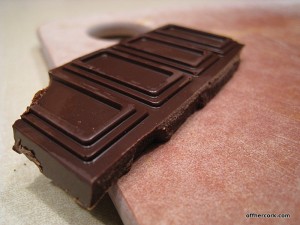 I had two squares of what you see and the other half went to Scott.  I like and don’t like this chocolate.  At first I like it because it’s dark chocolate and fabulous.  Then I don’t like because holy crap with the hot!  I thought there would be just a bit of heat in the background to sort of bring something interesting to the table.  No, this stuff is damn hot.  Which means I can’t eat as it’s too hot for my taste.  Those two squares I had did me in and it felt hot and heavy in my tum for a few minutes.  Ew.

The wine was great though.

I went to bed too late and so did not want to get up this morning.  I did get up to take care of Rocky and and then I went back to bed!  I did not have enough sleep and I recognized this and accepted.  Both Scott and I got up later and I settled in for some coffee and breakfast. 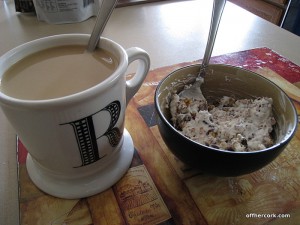 Something light since it was so late in the morning, yogurt and granola.  With a few cranberries thrown in for good measure.  I read some blogs and got my act together for a run.  It is very cool today and breezy for June so running later was not a problem.  I’m not sure how far I ran because I changed up my route a bit today to avoid some very annoying and sketchy construction guys.  I ran for the same amount of time (about 27 min) so maybe it was 2.5 miles?  My knee was tight during the first part of my run.  So much so, that I started thinking that maybe I need to see the doctor again.  It was slightly painful and I thought about changing my stride.

Red flag! Anytime you have to or even think about changing your stride that means something is wrong and you should probably stop.

Which is just what I was about to do but then my knee stopped hurting.  I’m not sure if it needs time to warm up or what but I need to start giving it more thought.  There’s a race I would like to run at the end of July which is a 4 mile race and obviously the half in October.  If I can’t start upping my mileage I’m not going to be ready.  Stupid negative thoughts have been creeping in today and I’m trying to keep them under control.

After my run, I leashed up Rocks and grabbed Scott for a quick walk.  I figured it was Friday and Scott could spare a few minutes for a family walk.

When we got back home, I changed into some recovery clothes and started thinking about lunch.  I was hungry but had no motivation to make anything.  The only thing I knew for sure that we were having was fruit because I got some nice fresh fruit while out yesterday. 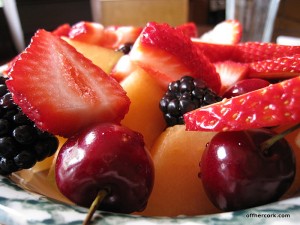 Eventually I decided on a fantastic salad! 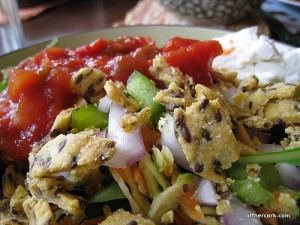 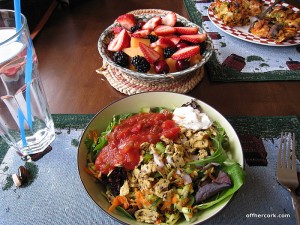 Oh my goodness this salad was so tasty!  It was like eating the best taco ever without all the junk.  The yogurt and salsa mixed together to make a really creamy “dressing” and the corn chips gave it the taco shell crunch.  I did use a bit too much salsa so by the time I got to the end it was a little to saucy for me.  I will definitely be making this again!  I also kicked a lot of that fruit, mmmm.

After lunch and kitchen clean up, I went through and cleaned the house.  Now I’m off to shower and get dressed to head out for some errands.  And then prep some things for dinner.  If the weather holds, we’re grilling, wheee!