Hi gang!  After chatting with you all, I showered and got clean for the day. :p  But I was also wiped and ready to chill and hang with my boys.  I totally did not feel like going out and running errands.  Thankfully it is nothing pressing and I was able to say, “screw it, I’m staying home.”  Thus I started dinner prep work.  While I prepped dinner, there were snacks. 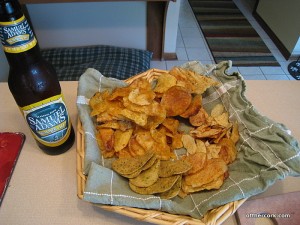 I put out some baked salt&vine chips and potato&chive FoodShouldTasteGood chips for me and Jalapeno chips for Scott.  Plus Scott had a Summer Ale (first of the season!!) and I had a few sips of that.  Not much because I’m saving my drink game for when we start Game 7 (eeep!).  The S&V chips were perfect for me because it was the end of the bag so I got lots of little crumbs.  I just wanted something to keep the hunger at bay, nothing major.

The weather turned gorgeous so grill plans were on!  Since it’s game night, I decided to make some fun stuff. 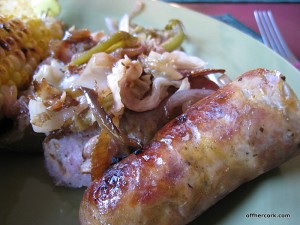 Brats! From Whole Foods that I simmered in beer and onions and various other spices for a bit.  Then tossed them on the grill to crisp and brown up.  There was sauteed red onion, green pepper, and cabbage to go with it. 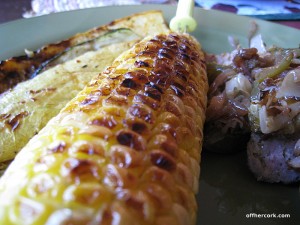 Grilled corn on the cob with a smidge of butter and salt. 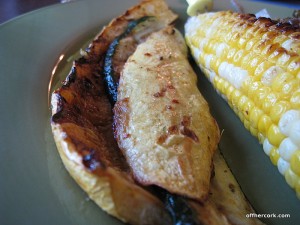 Grilled zucchini and yellow squash that had olive oil, buffalo sauce (Shylah, I do not make my own but I should totally try! I like Texas Pete’s Buffalo Sauce.), and grill seasoning. 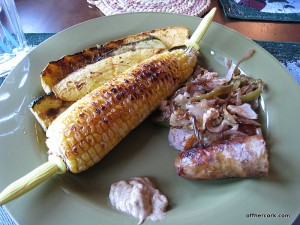 Everything was fantasic and I’m totally satisfied with my dinner.  I had a dollop of spicy mustard to dip my brat bites in.  There was a very tiny brat in the bunch that I claimed as mine.  I ate half and two bites of the other half.

Now it’s time for some new jammies and to start Game 7!  Go PENS!!