Hey gang! My mistake!  Last night was Game 6 of the playoffs.  No idea why I messed that up.  And as previously stated in the last post, I did indeed make a POM fizzie. 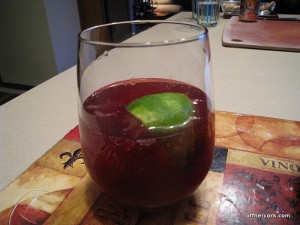 YUM!  POM+Cran-Rasp Seltzer+1/2 a lime with juice = fabbo fizzie.  I sipped on that while the game which caused me such distress.  It was serious and intense.  I did have to keep myself from falling asleep though because I was so flipping tired.  I finished the game and the Pens won just by the skin of their teeth.  Whew!  But I will take it!  Game 7 this Friday and I think I’m going to need copious amounts of beer or wine to get me through it.

I was in bed by 11pm and slept like a freaking log.  I was still super tired when I woke up this morning and absolutely did not want to get up for a run.  Meh.  But I’ll never get my endurance and distance back if I don’t bust a move.  So I crawled out of bed and took care of bidness.

Today was my first day since before my 1/2 last month, that I’ve actually run back to back.  I was told by the physical therapist to start running on a normal schedule again so that’s what I’m trying to do.  The weather was a lot less humid making the run a little more bearable.  My knee didn’t bother me at all nor did it feel tight.  Hooray! 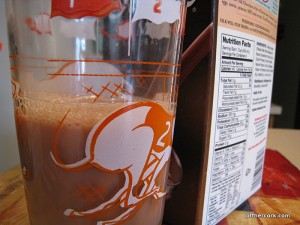 I had a glass and then another splash of CS and headed back out with Rocky.  After that was done I could finally shower!  I was feeling so icky, almost like the humidity leaves like a film all over.  Much better after the shower! 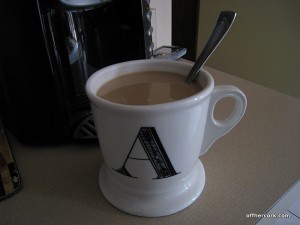 And totally better after this.  Coffee was so good this morning!  Once Scott got up and moving, I could hear his bellah rumbling so I headed into the kitchen for breakfast.  There was one banana left and that’s for Rocks, so no mashed banana in the oat bran this morning. 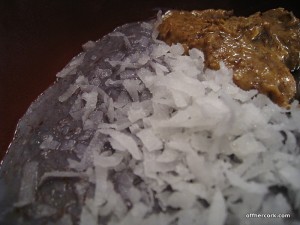 I added blueberries which turned it super blue, resembling something a Smurf would eat.  I’m assuming here as I’m not positive on the components of the Smurf diet other than the things I’m sure Smurfette ingested on a regular basis. Mix-ins were coconut and vanilla almond butter.

I did some blog things and am plotting out a to-do list because all of the sudden I’m loaded down with blog related writing tasks.  Wooo!  Then it was time for some lunch stuffs:  It was late and I was looking for something quick and easy. 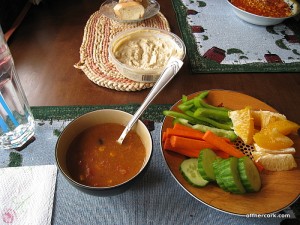 This totally worked.  A small bowl of Wolfgang’s Tortilla soup and sliced carrots, green pepper, and cucumbers on the side.  Also have an orange, which means there is no more fresh fruit in this house (other than apples).  The soup was too sweet for me and I ended up only having a few bites before calling it quits.  The veggies I dipped into some garlic hummus, they were perfect and the orange was perfect.

I’m trying to think of something to make for dinner this evening and am coming up totally uninspired.  I hate when that happens!

Ugh so many things left to do today, I’m feeling the time squish.  Need to plan stuff out a little more to get a handle on all that needs done.  Tune in for dinner to see what I ended up making!