Hi guys!  I was not in bed by 10:30 last night, I’m telling you now.  But! It was close, 10:45, so that’s not bad, right?  I would have loved sooner but we got back from class a little late and I wanted a bit more down time with Scott before rushing off to dreamtown.  I was hungry last night when we got home so I busted out some babaganoush and crackers. 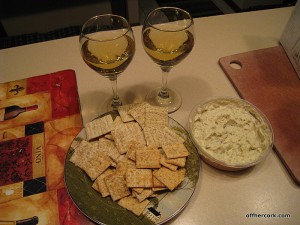 I have no idea how that wine got in the picture.  I set everything up and after the picture was taken, there he was all ready to be consumed.  I couldn’t turn him away, that would be rude.  I sipped my wine, had a few crackers + dip and then hit the hay where I promptly passed out till 7am.

I had to get up early this morning because I just had stuff to do.  I got Rocky taken care of and had some coffee. 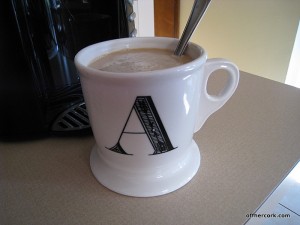 To help wake me up and power me through some articles and other officey stuff that needed to get done.  A little while later I headed upstairs to wake up Scott and get beautiful for the day. This means not wearing pajamas but wearing sweats.

And then I made breakfast. 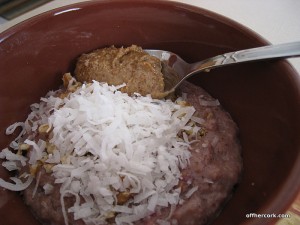 Oatbran with a pinch of brown sugar because I’m out of ‘nanas.  This had some raspberries in it and the mix-ins were crushed walnuts, coconut, and a spoon of vanilla almond butter.  For some reason this was not the greatest bowl of oatbran ever.  It was a bit too thick and I used too much crack.  I know, hard to imagine but I like only a hint of almond butter flavor and this was a tad too much.

After breakfast, it was time for the exercise portion of the day.  Rocks and I headed out and did about 2 miles of walking around.  I have discovered that 10am is prime walking time around here because no one is out.  No one is going to work, or school, or where ever, the streets are empty.  Heaven!

We came home and Rocky slept while I defuzzed and did my PT exercises.  I’m still supposed to be doing the IT band strengthening whatnots.  I had slacked because I was unsure of doing those with the hamstring strain.  I got the go ahead from the therapist to continue and so I busted out the resistance bands and went to work.  Tomorrow is my next PT session.

All of that worked up my appetite.  I was going to make a salad but decided I would rather have that for dinner and make it uber special.  That meant leftovers for lunch. 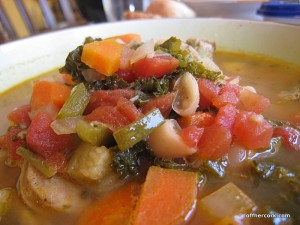 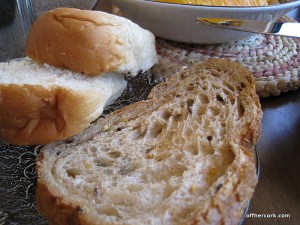 I stuck with multigrain

With a small slice of bread + butta. 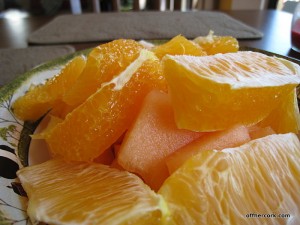 Fruit for the day

And some ‘loupe and orange slices as well.

I cleaned up the kitchen and then made myself some tea. 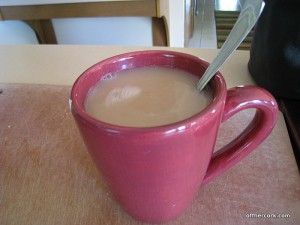 It was mandarin spice flavor.  I put some orange peel in with the water as it came to a boil to add in some extra flavor.  I also put one of the peel slices in with the teabag as it steeped.  Then I added a splash of vanilla soymilk for some creaminess and extra fanciness.

I did some more work and by midafternoon I was fading fast.  I could barely keep my eyes open and was having the worst time trying to put together a coherent thought.  Ugh.  Which prompted Scott to say, “Um, are you going to be able to handle class tonight?”

Good question!  At that point I had no idea.  Then I decided on an answer by going up to bed and laying down for a bit. :p  I didn’t nap but literally just laid there and rested my eyes for about a half an hour.  If I had to do that, then yeah, I’m too tired for class.  Plus this is Lorelle’s last evening with us, she and Scott needed to have a little computer coding and developing pow-wow.  Had we gone to class, that would have cut into pow-wow time.  As I’m finishing up this post, they’re already chit-chatting code.

I made a gigantor salad for dinner. 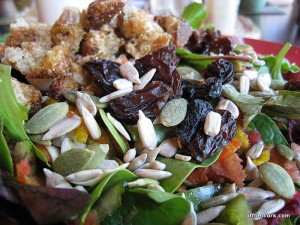 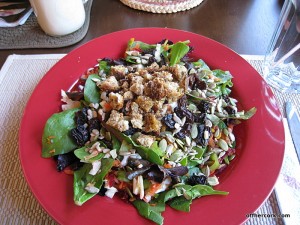 Topped with a little bit of Caesar dressing.  I kicked that whole thing too!  YUM!  Despite how large that salad is, it didn’t quite fill me up.  There may be a snacky in my future.

I’m already in my jammies and it’s time for me to hit the couch with mah book and relax for the rest of the night.  Later lovies!

For your reading enjoyment

Some blog posts I came across and thought you might find interesting too.