Warning: Parameter 2 to WPE\Site_Preview::the_posts() expected to be a reference, value given in /home/customer/www/foodembrace.com/public_html/wp-includes/class-wp-hook.php on line 303
 Thursday, May 14th, 2009 | Food Embrace

Hi guys!  Wow I am tired.  I’m in that sort of zombtastic mode.  Yesterday started bright and early.  Scott and I had to finish up some stuff around the house and then head out to the dentist to get our teef purty.  But first, breakfast! 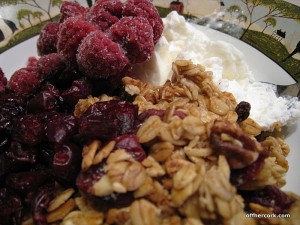 No coffee for me this morning because I don’t like having coffee before seeing the dentist.  I tried making peppermint tea but I didn’t care for it that early in the morning so it was bunk.  Breakfast was super easy and simple.

Then we were off!  After the dentist we made a quick run to The Hills Market because per my request they started carrying my version of crack. Isn’t that awesome of them?! 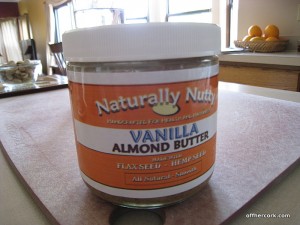 Hello Vanilla Almond butter!  And look at the gigantic jar too!  Sweet!  I cannot wait to dig into some of that yummer stuff.  After that we were off to pick up Lorelle and hit some place for lunch.  She mentioned loving sushi and it doesn’t take much convincing to get Scott to head to Akai Hana so we saw that again this week. 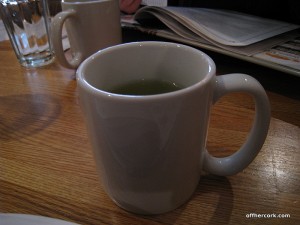 First there was green tea which was very yummy and calming.  I was a bit nervous at first since I had no sweetener, lemon, or any accompaniment.  But after my first sip, I loved it and drank mine no problem.  I started off with tempura veggies because I had never tried theirs before. 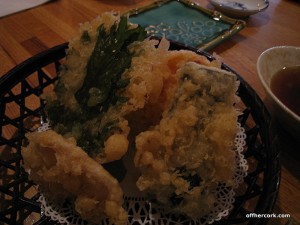 Is this healthy fried? Probably not.

Not bad tempura.  I had one piece of something that I have no idea what it was.  It was almost flower shaped with a few holes around the perimeter.  Then I had 1/2 a slice of acorn squash and a small piece of a fried leaf.  Lorelle said it looked like a grape leaf, but I again have no idea what that was.  Lots of mystery foods today! 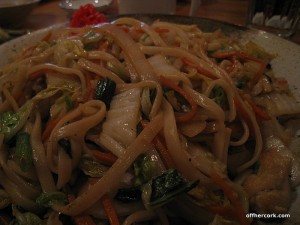 My main meal was yaki udon which is my super very favorite thing.  I asked for extra veggies and the server asked how much.  I said as much as you can.  And then she said, “$1 worth, $2 worth, $3 worth?”  I opted to go with the $2 worth of extra veggies this time around. :p  I was a little bummed that the extra veggies really meant extra nappa cabbage.  However, the serving was gigantic!  I ate a good bit but you could hardly tell, I brought a lot home. 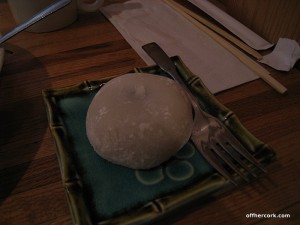 Lorelle got us a serving of mochi.  I had never had it before!  Here’s my mochi. 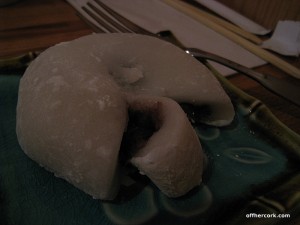 And here’s the inside, or what you can see of it.  I liked the redbean inside which was sweet and creamy but I didn’t care for the outer portion too much.  It was too gummy. I picked out the protein and ate that.

After a while though it did get a little too sweet for me.  You all know how I am with sweets.

After lunch we headed home and helped get Lorelle settled in.  Then I took Rocks for a walk, my exercise for the day.  Man I cannot wait to get back to running! 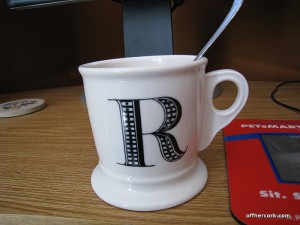 I asked Scott to make me some coffee, decaf.  I had a bit of a headache; I think from a combo of everything, not enough water, very tired, and no coffee this morning.  I thought the coffee might help my head.  I know it’s decaf but that has enough caffeine in it to see me through if need be.

I did some work and then we were off to the movies!  Lorelle treated us to Star Trek at the iMax here.  Wheee!  Before heading out, I had a small snack. 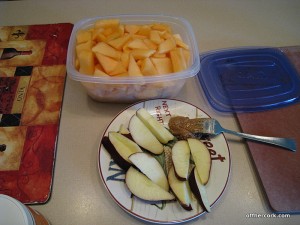 A wee red delicious, some cantaloupe, and some of my liquid crack.  No I did not dip the apples, I ate that baby straight up.  Oh Yeah!

Star Trek was good but long.  And for some reason the iMax plays the movies a little too loud for me.  Or maybe that’s just me being old.  Otherwise it’s a good movie with lots of blowing things up and amazingly enough, no sex scenes.  One small little scene that lasts 3 seconds maybe.  I have a hard time with poor Zachary though.  Man I just can’t stand him on Hereos and it’s hard for me to watch him period.  There’s just something about him that I do not dig.

The movie was long and when we got home I went to bed.  No really, I was wiped guys.  It was 10pm and I was hosed.  Scott asked me if I was hungry and I said I was too tired to be hungry.  Then I zonked out!