Hi guys!  I went to bed super late last night because I stayed up for a bit talking with Scott and Lorelle about their evening and the conference.  I had two glasses of wine while chatting.  And some frozen grapes! 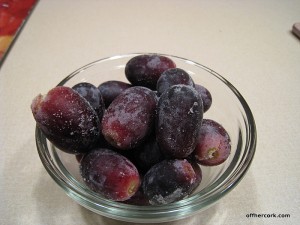 Thank goodness I take pictures, I totally forgot about the grapes. :p

Then by 1am (yikes!) I was headed up to bed.  Unfortunately I didn’t get a ton of sleeping-in time and was back up out of bed by 7:30am.  Coffee was much needed. 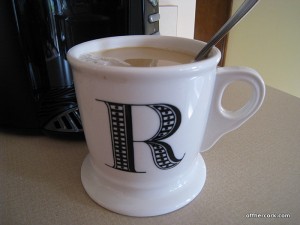 It was great coffee this morning!  Yum!  I had some of that while looking at some blogs.  Then I moved into the living room to work on articles and recipes.  I started getting a little hungry and had some cereal. 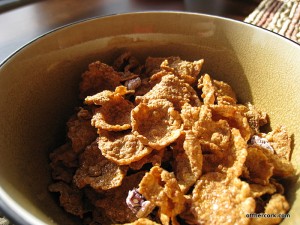 Kashi oat flakes and blueberry clusters.  After the picture was taken, I added some vanilla soymilk to the mix.  I watched some Food TV while eating breakfast.  It was nice to see some cooking shows!  I miss them.  Even though I pick on them so much, I do miss watching Food TV.  After a bit I headed upstairs to wake up Scott and to get myself dressed for the day.

Once he got up, I made Sunday breakfast! 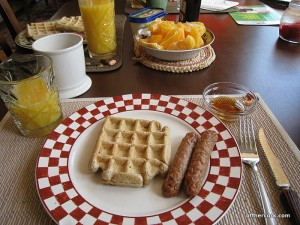 Fruit in the middle was an orange (which was super crappy) and some cantaloupe.  Waffles made with WW pastry flour and some chicken breakfast sausage.  I was so hungry I had another 1/2 a waffle!  I dipped my waffles in maple syrup.  Mmmm

We took Lorelle to North Market today.  She got some things to make a salad for dinner and a few other odds and ends.  I picked up a few things of different meats.  Unfortunately the butcher didn’t place the order for Rocky’s chicken but they did give us some backup chicken at no cost for the mixup.  Which was extremely nice of them.

Once home, it was back out the door to take Rocks for a walk.  Ooo it was chilly today!  And a bit on the windy side as well.  When we got back home, I washed my face, changed into comfy clothes and called it a day!  I was spent!  I laid on the couch for a little while and worked on a word search puzzle.  Goodness I love those things!  Sometimes they frustrate me, but that’s when they’re good.

Before dinner, Scott and I had a snack. 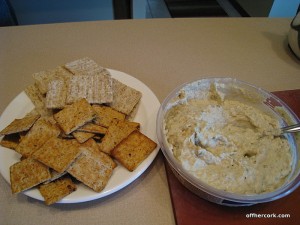 Some babaganoush that was sent in for a review.  My first taste and it was soooo good!  I had some with 365 wheat crackers and some kashi roasted veggie crackers.  Mmmm

Dinner was simple today because I was so tired.

Lorelle’s additions are the salad, some sushi for her and Scott, and some cheeses. 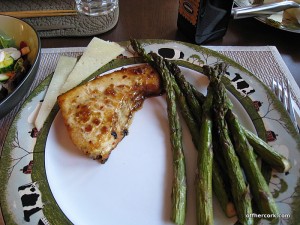 Second half of dinner

My dinner was a repeat of last night, different fish though.  This was swordfish and some roasted asparagus.  Cheese on the side, a slice of manchego cheese, and another she couldn’t remember the name of.  It tasted like a parm and it was sooo crazy good. 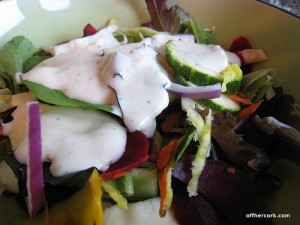 The salad had a ton of stuff:

I had some yogurt Caeser on top.

Then I had two more slices of the like parm cheese.  Now I think we’re going to hang on the couch and watch a movie.  I believe Scott is also pouring wine!  Then I’m hitting the hay early tonight.