Hi guys!  I woke up early this morning but laid in bed for a while because I just didn’t want to get up.  Then I heard talking outside and got grumpy about it.  I really shouldn’t I guess but jeeze at 7am even when you are outside you should still be using your inside voice. Not everyone gets up at the same time and not everyone wants to know about your toe jam and low water pressure issues.  The voices are what got me out of bed because like a proper Nosy Nelly, I needed to see who was causing a ruckus.  And then I got even more grumpy.

It was the same butthead from yesterday and he parked in front of my mailbox again.  Cue steam coming out of my ears.  Okay seriously that is just beyond petty and right into buttmunch territory.  I watched for a bit and it seemed like he was packing up so I gave him some time before I called somone about it.  Then he left so it was all good and I stopped being cranky about it.

I took care of Rocks and then came in and rolled my leg.  I have found that foam rolling my leg helps it to feel normal again.  Last night was the best session!  And today, while it is still a little stiff when I get up to move, it doesn’t take nearly as long to warm up.  And I can walk normal again.  The muscle is still tight but nothing like it was earlier.  Progress!  I’m excited and am hoping I can run on Sunday maybe.  Easy and short of course but run!

After rolling around on the floor, I had some coffee. 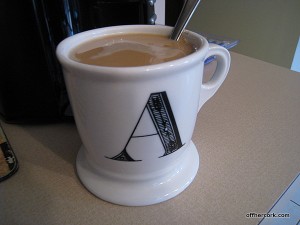 And I remembered to take a picture today!  More progress!  I only used the Meijer creamer today and mmmm it is so so good.  I did some blog stuff and wrote an article.  Then I went upstairs to wakey Scotty who leap out of bed like his butt was on fire.  In his sleepy stupor he was confused and thought his work conference call was earlier.  I reminded him that the call wasn’t until 10:30am.  He didn’t believe me.

I showered and felt like a functional human being.  Then I made breakfast which was a yogurt mess. 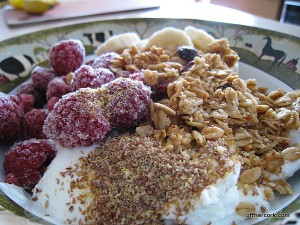 At least it's a pretty mess

With another small cup of coffee.  As I was eating, I noticed the time which was about 10:15 or so.

Silly boy, I don’t know when he’s going to start listening to me. :p  After picking on Scott, I got Rocks together and then we headed out for a walk.  I kept the pace brisk and felt okay during the walk.  When we got back I did some basic exercises because I was about to go out of my head not doing anything.

Then some yoga stretches and another foam rolling session.  Tomorrow if my leg feels better I’ll do those again and maybe Shred it a bit.  After that, I did some more work things and then it was time for lunch.

Lunch was sort of later in the afternoon and I didn’t want anything super heavy or even a bunch of stuff.  Seriously what I was craving and what my body said it wanted was PB and some fruit.  So that’s what I gave it! 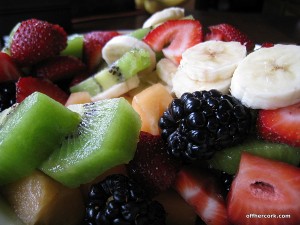 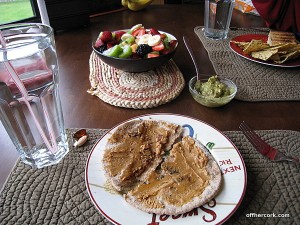 We split that.  And then I had a WW pita with PB and honey on top.  I also snacked on 1/3 slice of turkey deli meat as I was putting lunch together.  Oh and guac! I had 4 FoodShouldTasteGood muligrain chips, 3 with guac and 1 without.  YUM! You can see the chips on Scott’s plate.

I have no idea what to make for dinner.  It’s rainy and cold so something comforting sounds nice.  But I also would like loads of veggies so I’ll have to brainstorm for a bit.

For those that bake and make Vegan style goods, what do you use as a sub for butter?