Warning: Parameter 2 to WPE\Site_Preview::the_posts() expected to be a reference, value given in /home/customer/www/foodembrace.com/public_html/wp-includes/class-wp-hook.php on line 303
 May 4th, 2009: Breakfast and Linner (Finally some veggies up in here!) | Food Embrace

Hi guys!  Whew but the day got away from me!  Mostly it was because I walked into a time vortex at the grocery store I think.

Rocky let me sleep in till 8am, how lovely!  I got up and got him taken care of then quickly poured myself a mug o’ fuel.  I guess I forgot to take a picture!  Ah, Mondays. :p

I wrote yesterday’s recap and fiddled around on the internets for a bit.  Then I woke up my loves and took a shower.  And then I had some breakfast and a little more coffee. 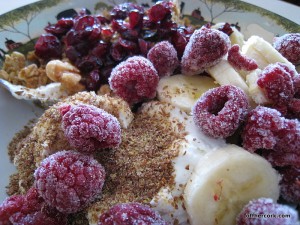 Fruit servings all in one

Today was a yogurt mess since our yogurt is expired and we need to eat it up!

Very yummy and very filling!  Then I took Rocky out for a walk.  Not crazy long but I was able to manager longer than yesterday.  I’m walking better even though my stupid leg still hurts.  Meh.  When we got back I assembled packages that needed to be mailed.  Once that was over it was time to hit the PO and the grocery store.  But first I had a snack because I was hungry and would not survive the outing unless I put something in my tum. 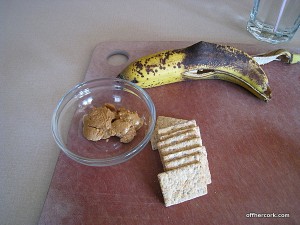 The rest of the banana, kashi honey sesame crackers + PB.  Very tasty!  Then we were off!  Scott was the one who went into the post office because he also needed to renew our PO box for the year.  He was gone a long time!  Half an hour passed and the temperature rose 2 degrees making it 71F out.  When he finally got back he said it was jam packed in there.  Apparently the day before Cinco de Mayo is a big postal day.  Who knew?

Off to the store!  I tried to get Scott to eat the emergency Zbar I carry in my purse but he refused.  I knew he was going to get cranky-pants on me but he said he would be fine.  To his credit he totally hid his cranky-pants well.

When we hit Meijer, I turned towards produce and Scott went off on his own to do whatever it is that he does.  I was still in the produce section when he met up with me again so he knew right away I was loading up my cart like a mad woman.  Normally we meet up in frozen foods or the snack aisle.  Not today because I was getting fruits and veggies like they were going to be extinct.  Then I got some lunchmeat and we finally headed out of the produce section.

I got a few other things and we were in the checkout line.  However, it had been a very long time spent shopping.  Whatever, I needed some veggies and fruit in a huge way!  We got our favorite cashier who returned back from a 3 month hiatus.  He chastized us for not using coupons which he always does.  In my defense, there are no coupons for fresh produce! And I said as much but he wasn’t picking up what I was throwing down.  And then I got to thinking, why don’t they put out coupons for produce?  It doesn’t have to be anything huge but “Save 10%” or “Take off $5 on your next produce purchase” would go a long way.

Am I right?  Totally.  Because that’s the bulk of our shopping bill is the veggies and fruit.

When we got home and started unloading Scott noticed something leaking.  Oh lovely, a bottle of window cleaner opened and was dumping out everywhere.

So I cleaned that up and checked out the purchases.  Thankfully nothing got damaged.  Whew!

Because it was so late when we got back I just made our “lunch” into Dinner.  Come ‘ere veggies!  In the words of Sarah, I made a “Hugh Jass” salad.  Scott was having leftover chicken so he just got a “Jass” salad on the side which he likes on occasion. 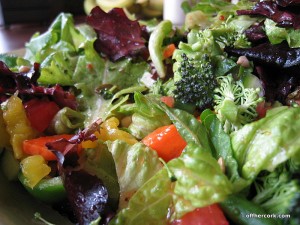 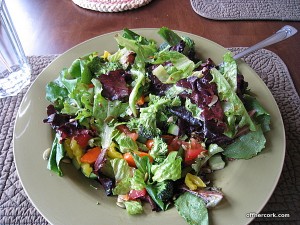 Dressed with Newman’s Light Sundried Tomato dressing.  It wasn’t bad but I didn’t mean to pick up the light version.  No fake sugars though so it’s all good for now.

I loved my salad!  And I also snuck two bites of Scott’s chicken.  Mmmmm!

Speaking of Hugh Jass, check out all this stinking kale I bought. 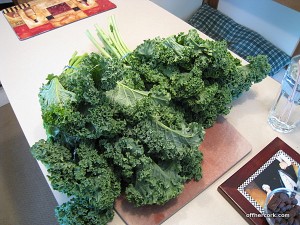 Hell yes!  Meijer had these two beautiful huge bunches of kale and I snagged them both.  The other bunches were small and silly looking.  These are glorious!  They are now washed and put away in baggies, it took three storage bags to hold all that goodness.

And this Hugh Jass bunch of bananas. 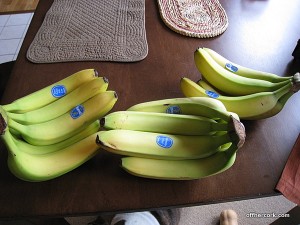 I also bought some pretty Hugh Jass cantaloupes at the store today.  I took a picture of them to show you but Scott won’t let me.  He said that the way I unloaded them as I was putting away groceries sort of  looks suggestive and perhaps isn’t suitable for the blog.  Whatever.  I don’t get it but it means no picture of my melons.

Now I’m off to see how much SF my leg can handle.  Later guys!