Warning: Parameter 2 to WPE\Site_Preview::the_posts() expected to be a reference, value given in /home/customer/www/foodembrace.com/public_html/wp-includes/class-wp-hook.php on line 303
 May 27th, 2009: Breakfast and Lunch: Changes in routine | Food Embrace

Hi guys!  Last night Scott and I kicked it on the couch watching game 4 of the Pens playoff series.  While watching incredible hockey I snacked on some frozen grapes. 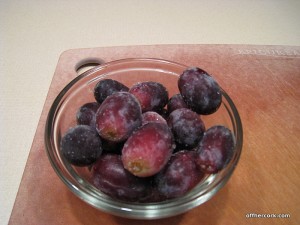 One thing I love about summer is the ability to have frozen grapes again.  Mmm mmm!  The Pens spanked Carolina and sent them packing because the Pens swept the series in four.  I felt bad for Carolina because the Pens just made them look like amateurs.  Especially when Carolina’s goalie, Cam Ward, knocked the puck into his own net.  Whoops!  Needing to finish the game caused me to be up till 11pm.  Yikes!  Too late, this girl needs to start getting her butt to bed for sleep a lot earlier.

I was dragging this morning when I woke up.  I got up a little bit after 7am which was just a tad behind schedule but I rolled with it.  I got Rocky taken care of and it was so flipping humid outside.  Ugh but I changed into my running clothes and was out the door.  I’m still on limited miles but am supposed to run at least 4 times a week and doing therapy exercises at home 4 times a week.  Because I’ve been off running, I was actually dragging a bit to get out the door but wow am I ever so glad that I got my junk moving.  It was hot and gross outside and I forgot my WonderWoman wrist bands but who cares!  I was running and it was fantastic.

My leg didn’t bother me at all during my run and I was able to bust out 2.5 miles.  Hooray!  My endurance is down but isn’t totally lost, thank goodness.  My first attempt to run last week must have just been a fluke because today I was fine.  Oh it was so nice to move and not constantly be thinking about my stinking leg.  Love!  I want to run tomorrow but am not allowed, boo.

Once home, I met my after-run friend at our usual after-run hangout. 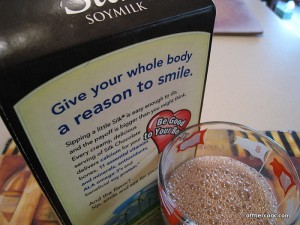 Hello my lovely!  Then I stretched, rolled my leg, and hit the shower.  After my shower, I put on my new shortie cute robe and headed downstairs.  Admittedly this robe is a terrycloth deal and very hot.  Eventually I cooled off but whew, it was warm there for a minute.  I was saying as much to Scott when he offered me an alternative.

Me: I love this robe it’s so cute!  But it’s very warm and I am burning up.

Scott: Do you think you’ll need one of those shorter, very thin, clings to your body kind of robes?

Me: *assembling breakfast*  Yeah, that’s probably a good idea. They are probably cooler.

Scott: Okay, we’ll have to go out and get you one right away.

Me: *stops assembling breakfast* Why Mr. Scotty I do believe there is an ulterior motive at work.

I love when guys act like that, it’s so transparent but totally hilarious.  I got back to assembling breakfast and created a yogurt mess. 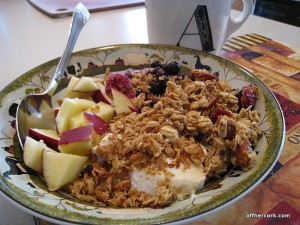 Since I was hot, oats and oatbran were out today.  Cool fruit and yogurt were in!

With a mug of coffee.  Yum!

Confession time!  I’m a mixer guys.  My oats, oatbran, and yogurt all look pretty till I take the picture.  Once I have a good pic, everything gets all mixed together and that’s how I eat it.  Scott leaves his all pretty but not moi.  Everyone in the pool, let’s go!

After breakfast, I brushed the teefs and headed out the door with Rocky.  The humidity lightened up a bit and I wanted to take him for a longer walk but didn’t want to push it with my leg.  We did slightly over a mile.  Back home and I did some work.  Then I was getting to the starving point.  Scott was on a conference call so I held out as long as I could. When I couldn’t take it anymore, I headed into the kitchen for some eats. 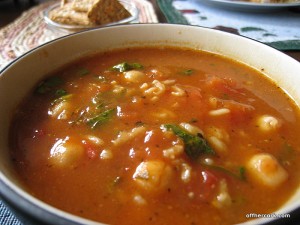 Wolfgang tomato basil soup that I beefed up a bit with more spices, chopped spinach, some chickpeas, and a bit of rice from last night. 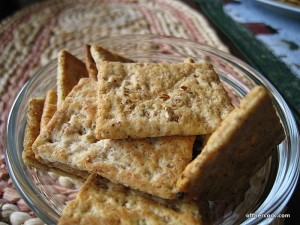 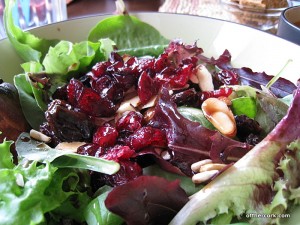 A small side salad with:

Drizzled with a bit of balsamic and olive oil. 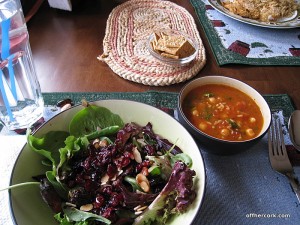 Since I had three servings of fruit for breakfast, I wasn’t too concerned about the lack of fruit with lunch.  It is sort of rainy gloomy outside which is why I felt like some soup.  Mother Nature has been such a storm tease lately and it’s driving me nuts.  It’s been terribly humid the last several days with rain and thunderstorms in the forecast.  Yet nothing happens.  It has been overcast with dark clouds and very windy and nothing.  Oh it might sprinkle for a minute but that’s it.  OY!

Off to do more work and some stuff done around the house.  Later guys!