Warning: Parameter 2 to WPE\Site_Preview::the_posts() expected to be a reference, value given in /home/customer/www/foodembrace.com/public_html/wp-includes/class-wp-hook.php on line 303
 May 21st, 2009: Breakfast and lunch: Back to regular schedule! | Food Embrace

Hi lovies!  I hopefully should be back to regular posting barring no more craziness happens.  The past two weeks have just been beyond bizarre for Scott and I.  We’ve just had so much going on, both great and not so great, that we are both very much looking forward to this long weekend.  Weekend festivities have already started on this end, wheee!

I, unfortunately didn’t sleep so well last night.  My throat was very dry all night long and I kept waking up coughing.  My coughing fits caused me to have to keep blowing my nose and a nasty cycle ensued.  Yuck.  I was up at 7:30 this morning and just laid in bed for a bit because I could.

I got up and took care of Rocks.  It was another beautius morning.  I poured some coffee and headed to the office. 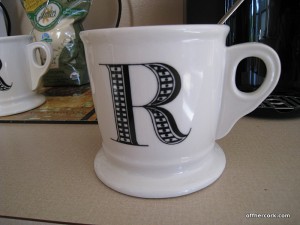 I’m trying something new lately with my coffee, using half&half + cane sugar.  I really want to move away from creamer since it has so much crap in it.  I justified my usage of it because I only had 1 cup of coffee a day, so whatever.  Then my coffee usage went up to two mugs which thus increased my creamer amount.  I don’t want this and so now I’m looking for alternatives.  I’ve tried Silk creamer but find it pretty nasty.  I need something with a bit thicker consistency.  It’s a work in progress for right now while I figure out what works and what doesn’t.

After coffee, I headed up to get Scotty loves up for the day.  Breakfast was an easy affair. 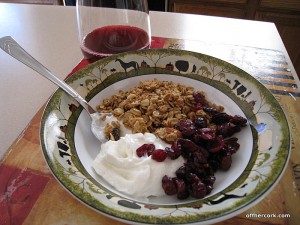 Yogurt + granola + cranberries.  YUM! And a wee glass of POM.  I was hungry but not starving.  Oatbran minus the banana has not been hitting the spot lately so I opted against that today.  After breakfast, I got dressed for the day and took Rockies out for his walk.  It was a lot warmer this morning at 10am than it had been previously so our walk wasn’t quite as long today.

Despite the heat, it was really nice to be outside today.  Once we got back, I started getting the house cleaned up and doing some loads of laundry.  I did a little bit of work related things and then it was time for lunch.

Slim pickings today because we are running low on fresh veggies and fruit. 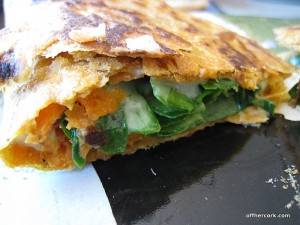 I decided to do a version of Sarah’s Crack Wrap.  Except mine is more like the illegitimate 3rd cousin twice removed.  It’s a WF red chili tortilla spread with a little bit of hummus.  Shredded carrot, chopped spinach, and a few thin slices of onion jack all heated up to crispy gooey deliciousness. 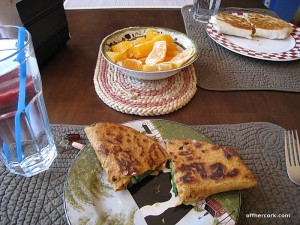 And some oranges on the side.  This was very filling!  I thought I would be looking around for something else to eat but this kept me pretty satisfied.

As you can see, I have not run today.  I almost went without mentioning it because I actually didn’t want to hear any backlash about it.  And then I thought, I actually don’t give a flip about backlash.  I mean, if someone is going to comment some smack that’s their problem and not mine.

I ended up not running this morning because I know we are going to MT conditioning class this evening. Class is different everytime we go, that’s part of the appeal. Anyway, I didn’t want to run this morning and then either not be able to attend class this evening OR be limited in what I can do in class.  I decided that I could run tomorrow morning and all would be right with the world.  In case you were wondering why I wasn’t out pounding the pavement first thing, that’s why.

Finding balance in my life isn’t just about the food.  It’s about exercise too.  Since I have to ease back into running, I’m taking that to heart and easing it back into my schedule.  I won’t lie, it sucks. You all know how much I love running and how much it is a part of me.  And if I want to have a long running career ahead of me and be ready for my next half come October, then balance and moderation are key right now.  I’m trying to take it slow and not rush things.  It’s like running and I have to start dating all over again before we can go all the way.