Hi gang!  I am a sleepy head today because I stayed up way too late last night watching the Pens. Game went into OT and they lost.  Damn!  While watching the game, I had these: 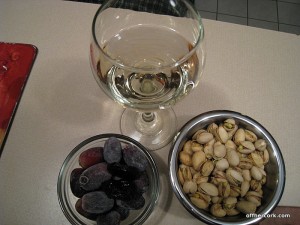 Yes that’s wine, it was a stressful game.  Pistachios, frozen grapes, and two prunes.  The grapes and prunes were for me and I ate them all!  The pistachios were for both of us.  I only had a few, maybe 7?  It always seems weird to me having grapes with wine.  I realize it’s a common thing but it seems sort of not right.  Like eating cheese and washing it down with milk, ya know?

And not photographed because it was unexpected, cheddar fishies!  Scott got some out to snack on and brought them over to the TV room.  Next thing I know, I’m snacking on fishies while yelling at the TV and sipping wine.  More evidence of my Klassy-ness right there.

I got up not long after 8am and started the day.  First order of business after taking care of Rocks was coffee. 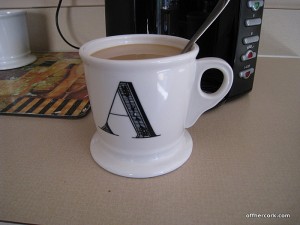 Coffee was just okay today.  Sometimes when I’m too tired, coffee and foods are not as appealing to me.  A good foodie should probably always want food but you know me and I like to be honest, so I will gladly say that I do not always want food.

I did some work stuff and then headed upstairs for a shower and to wake up my loves.  Showering at 9am in this house is prime shower time.  I get the perfect water pressure and can have a super hot shower.  Any other time after 11am and the shower is for crap.  Water pressure too low so you sport Seinfeld hair and I can’t make the water hot enough.  I have no idea why there is this fluctuation with our hot water for showering.  It only happens with the shower.  I could take a boiling hot bath any time.  But for best showering experience, 9am is when you want to hit it.

After my shower, I had some breakfast and decided to have some of the rhubarb crumble. 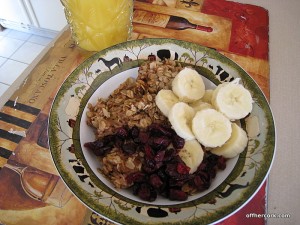 veggies and fruits in one

Why not, right?  I mean, it’s basically like oatmeal with a veggie.  I heated it up and added 1/2 a sliced banana and some cranberries.  It was really good!  And I washed it down with OJ.  The beverage, in case there was any confusion.

I took Rocky for his walk and once I got back I had to get down to more worky stuff.  Then it was time for the doctor!  Details at the end.

Since my doctor’s office is close by to one of Scott’s favorite sushi places, picking up something for lunch was required.  He got two spicy tuna rolls and demanded that a picture be taken of it to share with you all. 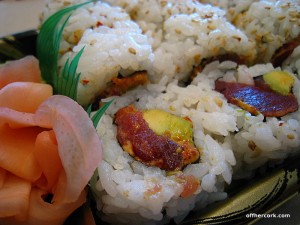 Scott doesn’t really demand anything, so I figured I better oblige!  Here you are, Scott’s spicy tuna roll lunch from Akai Hana.

My lunch was a little more involved because I can only eat a small amount of sushi.  My sushi today: 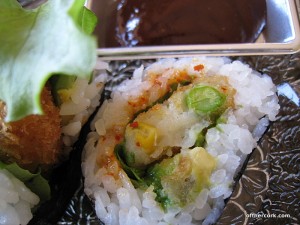 Was an “Idaho Roll” or “I ‘da ‘ho Roll” which is the version I prefer but have not yet perfected.  It had a veggie croquette with avocado and spicy sauce.  Oh and lettuce!  The croquette is a mashed potato base with veggies, breading and cooked.  So good! 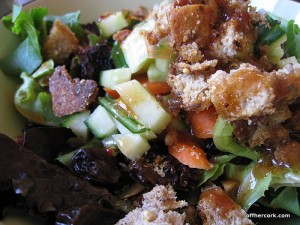 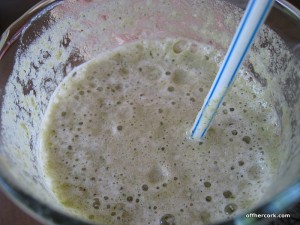 And a smoothie that I totally bumped up.

It made so much smoothie it was crazy.  I had to dump some out in order to blend it all.  Filled our glasses and then blended the remaining batch.  So yummy!  I love how thick the protein powder makes the smoothie. 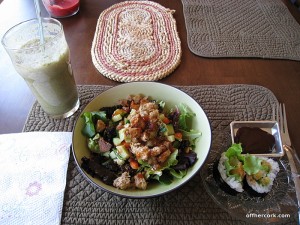 My lunch all together which I totally kicked.  That’s BBQ sauce for my sushi.  Whatever, it’s yummy!

My doctor checked me over and I have strained my right hamstring.  The hamstring and the calf connect, which is why I feel it in the calf as well.  Off to more physical therapy I go!  For hamms and calf strengthening exercises and more ultrasounds.  If it’s not better in three weeks, I’m to go back and see him.  I hope it’s better in three weeks!  I’m already cranky as this is week two off of running.  He knows I want to run the 1/2 in the fall so he said this was the best way to try and get me back running as quickly as possible.  Having a doctor who is also a distance runner is awesome!  If you get an injury from a sport, I highly highly recommend seeing a sports doctor because they know that training is number 1 important.