Warning: Parameter 2 to WPE\Site_Preview::the_posts() expected to be a reference, value given in /home/customer/www/foodembrace.com/public_html/wp-includes/class-wp-hook.php on line 303
 May 11th, 2009: Breakfast and lunch | Food Embrace

Hi my pretties!  And handsomes for the gents, all two of you.

We finished the Pens game last night and holy crickey I am starting to get ulcers.  Good action but whew I can only take so much!  While we watched I sipped on this: 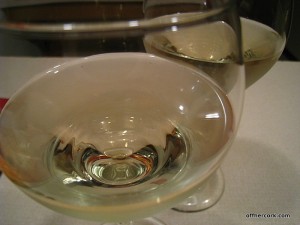 I think it was Little Penguin Pinot Grigio.  Scott was in charge of wine pours which is why I’m not 100% on the name.  Then we munched on this: 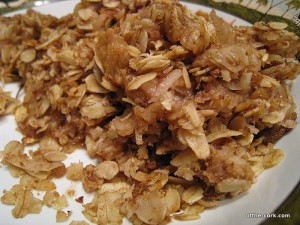 There really is rhubarb in there...

Some rhubarb crumble.  More crumble and less rhubarb.  I didn’t realize how much rhubarb cooks down.  And I made an abuncance of “crumble” topping.

Mixed it well and put it over the cooked rhubarb and then baked till crunchy.  It was pretty yummy.  It tasted like a bowl of oats with a tart kick to it.  I had a second glass of wine to round out the evening and to help cut the tartness of the crumble.

Then I went off to bed around 11ish and promptly passed out.  Rocky let me sleep in till 8am this morning!  Hooray Monday rest days!  It was pretty warm when I let him out for potty run this morning and I was surprised.  I opened the sliding glass door and poured some coffee. 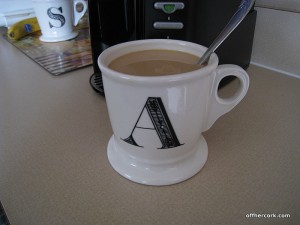 I sipped and read some blogs.  I’m so behind!  My reader is craz-ah full!  Then I got Scott up and started some laundry.  After buzzing around the house cleaning and putting things away, I made some quick breakfast. 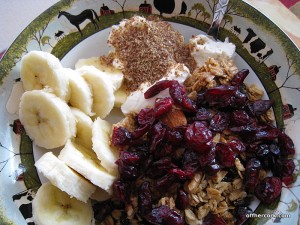 A yogurt mess with water. I wasn’t feeling the second cup of Joe although it sounds good for right now!

It was good but I think I really enjoy yogurt the best when it’s yogurt + granola + cranberries and that’s it.  Other stuff seems to take away from the flavors and cause too much going on.  Will I stop eating messes?  Probably not for the occasional breakfast meal.

After I ate, it was time to head out with Rocky.  We took a mile long walk and I call that good for now.  After the walk in which I discovered the warm weather from this morning didn’t last and it was cool and breezy outside, I came home to more cleaning.  I organized my desk a little better and can now think a little more clearly.  I need to plan out some things for the blog and work to create a bit of a schedule.  Me and my Type A side need schedules and to-do lists, otherwise I’m lost!

I finally made lunch around 1pm or so.  I wasn’t too hungry so I kept it light and simple. 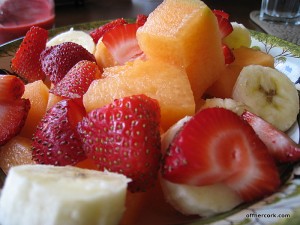 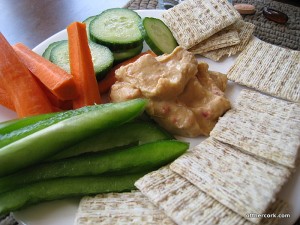 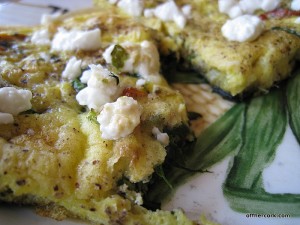 Other side plate is leftover fritatta from yesterday. 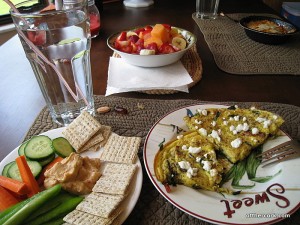 I ate the smaller portion of fritatta, all the veggies, and a few crackers.  I ate a good bit of the cantaloupe because it was in perfect condition!  Very ripe, sweet, and juicy but best of all, COLD!  I love my cantaloupe a little more when it’s cold and not warm.  After lunch I made some multigrain croutons, more laundry, and am about to attempt more organizing.

Scott and I have a crazy busy week this week and I’m plotting and planning and generally trying not to pull out my hair.

I called and set up a doctor’s appointment for tomorrow.  The area I talked about yesterday hurts today.  It doesn’t impede my walking nor am I limping, but it hurts.  It hurts a lot to go downstairs.  It is not putting weight on that leg that causes the pain, it’s the motion you make as you’re walking. Going from my left leg to my right leg.  It’s the act of swinging my right leg forward that hurts. Not a weight-bearing issue.  I have no problem going up stairs, just down.  So weird! So I will see what he has to say tomorrow.  I hope it’s something I can deal with at home and not have to go through another round of physical therapy.  I really like the guys at that office but I just don’t have the extra time for physical therapy! We’ll see what tomorrow brings.