My thought process went like this. “Hey it’s Mother’s Day, I bet no one is going to be at the park!  They’ll be all off BBQing or at restaurants or whatever, but totally not at the park.  Let’s go!”

And off to the park we went where it was jam-packed with people.  And do you know what they were doing?  Grilling.  Wha the wha?!  Who goes to the little community park down the road and decides to grill?  Right, does this sound strange to anyone else?  If you were going to grill, wouldn’t you stay home?  Unless I guess if you have an apt where you can’t grill maybe.  So we walked Rocks around the path once and by this point it was getting to be a little too Stepfordish of a situation and we boogied out.  My dog was satisfied with his walk.  I know this because his big old boxer tongue was hanging out. 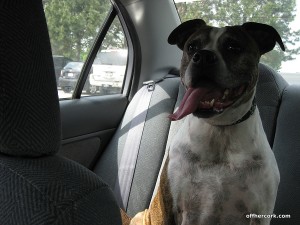 Hooray for the park!

Also I would like to take this time to show you how different my husband and I can be sometimes.  This is what I like to call, “No I’m fine. I’m just with that homeless person” kind of situation.  When I say, “Hey, toss on some clothes and let’s hit the park.”  Or, the more common phrase, “Hey toss on some clothes so we can go to the grocery store.”  The reason we have to “toss on clothes” is because both of us are normally in jammies all day long. When you work from home, business casual takes on a entirely different meaning.  Anyway, this is my version of “tossing on some clothes.” 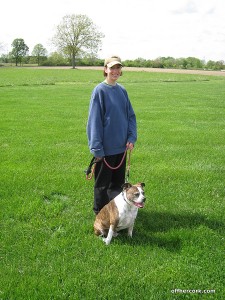 Yes I have a permanent address, why do you ask?

I look like a homeless person.  Mismatched cruddy sweats, no makeup, hat, you get the idea.  But I am wearing a bra AND undies (which is rare) so I score points there. 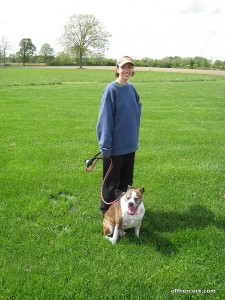 Halp!! Get me away from homeless lady!

But my husband?  Always looks like he just walked out of a clothing ad.  Observe. 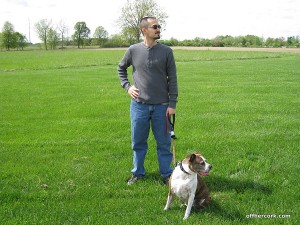 Well isn't today a fine day to be out.

This is his idea of “tossing on some clothes”. More evidence?  Coming right up! 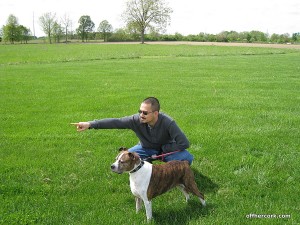 Hey buddy, what's that over there?

What are they looking at?  Is it exciting?  I have no idea but it’s so great it gets “the point” and has both of their attentions. 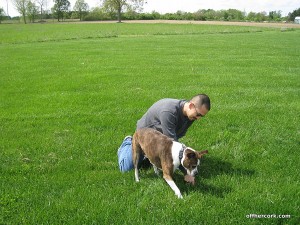 What ever they were looking at has leaped across and landed right in front of them! 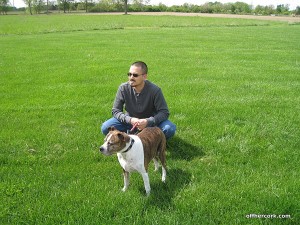 And I have no idea what happened here but I think maybe Rocky farted from all the excitment of the looking at the thing that deserved the point.

Clearly we have two very different ideas of “casual”.

Once we got back home, Scott went out to mow the lawn and I started busting around in the kitchen.  But there was a time out for a snack because I was hungry. 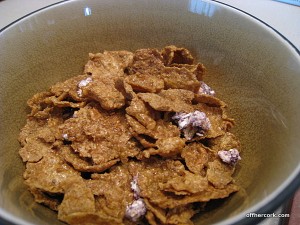 Some Kashi cereal, oat flakes and blueberry clusters.  After the picture I added a little bit of vanilla soymilk.

I put some rhubarb on to cook and then I called my mom.  I chatted with her for a bit and then I made a crumble topping and baked it.  Smelled awesome!

When Scott was done mowing, I got dinner together.  I put in some sweet potato fries and prepped the seafood. 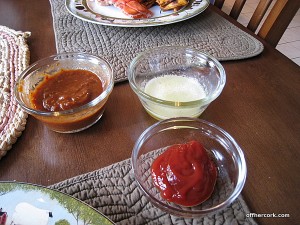 First the sauces.  From left to right, top to bottom: 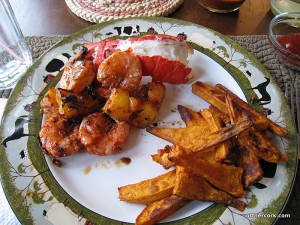 Sunday supper!  Grilled lobster tails, some shrimp and pineapple skewers in the same chipotle glaze we had earlier this week (it was on salmon and we had it Tuesday).  Not the same exact glaze, as I had used that one all up.  I made a new batch.

I started off with 5 shrimp and had two more.  Lobster tails were leftovers from a package I bought for Scott’s b-day in February.  Sweet potato fries were coated in buffalo sauce and other spices. Super yum!  And grilled pineapple is just fabbo.  If you’ve never tried, please do!  It’s crazy good.

And rhubarb crumble for dessert later.

Happy Sunday!  Hope you all had a great weekend!  I’m off to finish last night’s Pens game and have a glass of wine.  Kick it!