Hi guys!  Last night Scott and I watched the first two periods of a Pens game and I sipped on another fizzie. 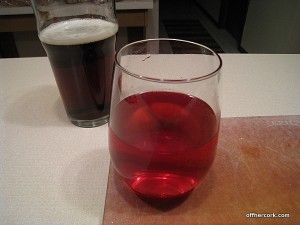 That’s Scott’s Brown Ale in the back.  I didn’t even finish my fizzie and then it was off to bed!

My alarm was going off for 10minutes this morning before I heard it. :o  I guess I had it turned down too low.  I got out of bed and got Rocky taken care of, then changed into my running clothes.  I wore my new long sleeved running shirt I bought yesterday which is a Nike ACG shirt and I love it!  It’s soft, not spandexy, and still wicks away the sweat.  It also has extra long sleeves that I can pull down over my hands to keep them toasty.

It was a bit chilly this morning when I set off so my hoodie and hat were needed.  I busted out 9.5 miles today and it was awesome.  Hell yes!  I didn’t get bored but I did get a little hungry on my last two loops.  I had a good pace and felt amazing!  Obviously a huge difference between running when sick and running when healthy. :p  Today’s run felt so much different than last Sunday’s run.  I was just pumping along and going about my bidness.  I did the 9.5 in 1:47 which isn’t bad.  I kept about an 11min pace and I’m happy with that.  Go me! 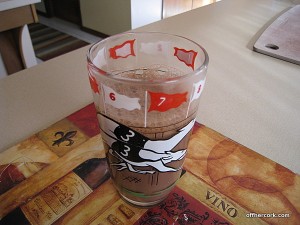 I came home and slammed two huge glasses of CS.  So good and totally needed!  I stretched and then immediately headed up for my shower.  I knew today would be long and the morning would go quickly, so I didn’t want to piss around too much.  After my shower, I put on my robe and went in for some coffee.  Mmmmm! 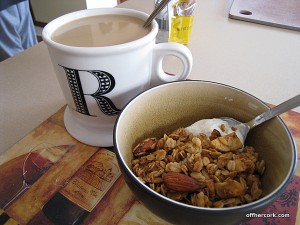 I had coffee and some yogurt + granola.  I did some bloggy stuffs and chatted wtih my loves.  Then I got up to make breakfast. 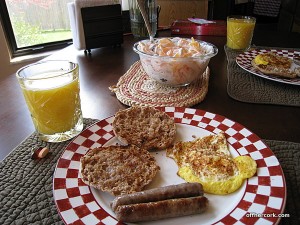 Sunday breakfast was quick and easy today.  A WW english muffin + butter, a fried egg (I only use a bit of olive oil), and some sausage.  In the middle is a fruit salad + yogurt.

Very yummy and very filling!  After breakfast and cleanup, I leashed up Rocks for his walk.  Oh my we encountered some major drama of the likes that I have never dealt with before.  Unfortunately we witnessed a dog get hit by a car.

It was horrible and I would rather not rehash it.  The dog ended up being okay and a good portion of our time was spent trying to find him because he took off after being hit.  He was found and returned to his owners (we knew where this dog lives).

Once back home it was a mad dash to get ready for the MT seminar.  We were there for several hours and then afterwards there was food.  No pictures.

Once home, I fed Rocks and then headed up to crash in the tub for a bit.  Man guys I am wiped out today.  Whew!  I took a nice bubble bath with some epsom salts.  Mmmmm so nice.

Dinner was just reheated stuff.  I know that I didn’t have enough veggies today but I was just too tired to make a salad.  All I wanted to do was plop down on the couch.  I wasn’t super hungry since I had that stuff at the seminar but I do need to make up for my long run deficit. 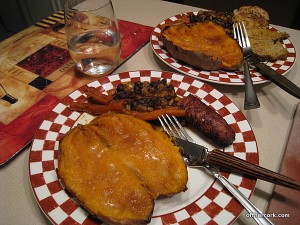 On the plate is some roasted carrots, baked sweet potato, small link of kielbasa, and leftover bbq beans.  The sweet potato had some butter and cinnamon sugar on it.  The plan was to top it with cheese!  But since I had the cheese potatoes at the gym that sort of kiboshed those plans.  I like baked sweet potato, I don’t care how it’s presented. So it’s all good.

I try not to drink any alcohol on Saturday evenings since my long run is the next day, at least while I’m training for the half.  So tonight is all about relaxing!  There will be some sort of drink and chocolate in my future.  Wooo!