Warning: Parameter 2 to WPE\Site_Preview::the_posts() expected to be a reference, value given in /home/customer/www/foodembrace.com/public_html/wp-includes/class-wp-hook.php on line 303
 Review: Stoneyfield Oikos Greek Yogurt | Food Embrace 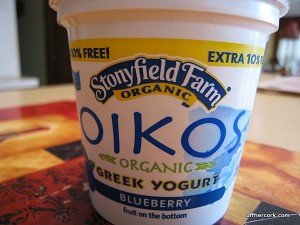 Hi gang!  Kristina at Stoneyfield contacted me about their Greek style yogurt called Oikos.  She offered to send me some coupons to give the yogurt a try and review for you all.  Of course I agreed!  I love yogurt and free yogurt is always welcome in this house.

I will say right off the bat that I love Stoneyfield yogurt.  And if we have yogurt in this house that is not Greek style, then it’s Stoneyfield Farms yogurt.  Their yogurt is organic and comes in many varieties and flavors.  Our fave being Whole Milk French Vanilla with cream on top.  Oh yeah that yogurt is some very creamy goodness.  The vanilla being just enough for flavor and sweetness but not overpowering.  Rocky gets the Whole Milk plain yogurt.  We really do love the stuff!  It can be tricky to find in my area though and I’m not sure why.  I also have a lot of trouble finding the Oikos Greek yogurt but I think its popularity is starting to increase.

Since Kristina sent me a very generous coupon package that included coupons for FREE Oikos.  I actually had a run-in when purchasing the yogurt. :p  The cashier at Whole Foods didn’t seem to believe that I would have coupons for free products.  She looked over my coupons for about 5 minutes (no really, she did) before entering them into the register.  And then since some of the yogurts said, “Extra 10% Free”, that made them a different weight not matching what was approved on the coupon.  She called a manager over to see if she could still sell us the yogurt.  I guess she missed the concept of what an “Extra 10% Free” actually meant.  The manager of course, said it was fine.  Jeesh! I’ve never been scrutinized before over a coupon! 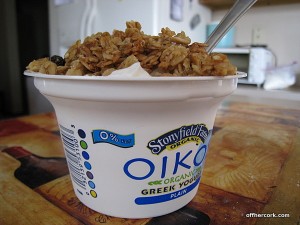 I bought three varieties, Plain, Blueberry, and Vanilla.  All of them were 0% fat and I actually prefer my yogurt to have some fat in it so I was a little skeptical.  I was surprised by the creaminess of the yogurt. It wasn’t quite as thick as I would have liked but it was much thicker than I was expecting for a nonfat Greek style yogurt.

The blueberry I had straight and thought it was really good.  It wasn’t overpoweringly sweet like some fruit yogurts can be (Chobani for example, that yogurt is way too sweet for me and I can’t eat it).  This still had the tartness of Greek yogurt and the fruit was on the bottom providing a nice mix-in and texture.

The Vanilla flavor I used in a fruit salad.  It provided a nice balance to the fresh fruit along with adding an additional flavor in the background.  The vanilla had the least thickness and having it with fruit worked out for me.  I don’t think it’s something I could eat plain or with granola.

The plain flavor I had mixed with granola.  It was perfectly tart and could be used as a sub for sour cream or made into a savory dip.  It was the thickest of the bunch and went very well with the granola mix-in.

Fage is still my favorite because it’s extremely thick, almost like a cream cheese, and I love that.  However, I would definitely reach for the Oikos for a backup yogurt.  And if I’m making a fruit salad then I’m going to use the Vanilla Oikos for that only because it does such a nice job mixing and pairing with the fruit.  If you like yogurt and are thinking about trying out some Greek style yogurt, Oikos flavored yogurts would be a great intro into the world of Greek Yogurt! 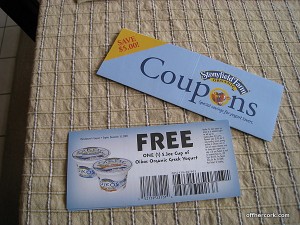 Because Kristina would love to send you some coupons as well!  I should have spread the coupons out for the picture, but I promise it’s a lot of coupons!  There are 6 coupons for FREE Oikos and then a whole booklet full of coupons for a variety of Stoneyfield products including frozen yogurt!  Which is good stuff!

Just leave a comment saying you’d like to try some and I’ll pick a winner on Friday by random number generator.  Now I realize there are some pretty sweet Stoneyfield contests going on right now, but Free is Free guys!  So if you want to try some just comment away!