Warning: Parameter 2 to WPE\Site_Preview::the_posts() expected to be a reference, value given in /home/customer/www/foodembrace.com/public_html/wp-includes/class-wp-hook.php on line 303
 Review: Brooklyn Brewery’s Black Chocolate Stout | Food Embrace 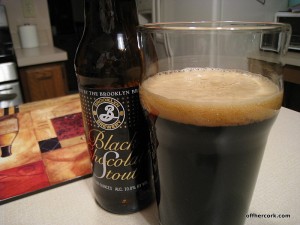 Sometimes I buy things on a whim.  And sometimes I’ll see something in the store and pass it over several times before finally deciding to purchase it.  This Black Chocolate Stout is an example of the latter.  I saw this at Whole Foods numerous times and while the chocolate in the title called out to me, I never felt compelled to purchase it.

Until a few weeks ago when I could no longer ignore the call for something dark chocolate.  I also had yet to try a stout, so I finally broke down and purchased a 6-pack.

I do not regret this decision.  Which I’m sure is what you expected me to say.  Thus he became my new boyfriend.  Don’t worry, Scott is fine with this.  We are both open to trying new things.

Just looking at this pour makes me all giddy inside.  The beer is so dark and heavenly.  Even the head is a darker, almost mocha color.  The first thing I do when trying a new beer is smell it first.  Like how one handles wine.  I smell, swirl, and smell again.  This had a nice chocolate, and a sort of coffee, aroma to it.  I could smell it all day long. 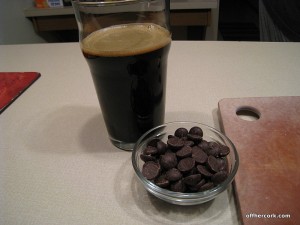 With it's best friend

This beer is beyond amazing.  It’s very smooth with no bitter aftertaste at all.  It goes down very easy and makes for a lovely sipping beer or perhaps paired with some dark chocolate.  I put that combo together all on my own, I understand how impressed you are.

In general I love my beer, but I don’t usually drink an entire bottle myself.  I’ll split it with Scott and be good.  But this beer I want all to myself.  Despite the fact that it is a dark beer, it doesn’t sit heavy in your stomach nor does it have a thicker consistency.  It’s really a great beer.

I find this beer is best when only slightly chilled.  Served super cold, it tends to be bitter and acidic.  In the event you get one that is too cold, just let it hang out for a few minutes and it will be fine.

While I have had this beer with both dark chocolate chips and a few slices of dark chocolate panettone, I like it better all alone.  It’s a great beer to just sip on while relaxing on the couch or with some friends.

If you’ve never had a stout before, cut your teeth on this one.  If you enjoy stouts, give this beer a try and see what you think.  It’s also a seasonal beer (naturally, such is my luck) so stock up while you can!  I know I will be and don’t think I won’t fight you over it either.

(You may be required to enter your age in order to see the website.)