Warning: Parameter 2 to WPE\Site_Preview::the_posts() expected to be a reference, value given in /home/customer/www/foodembrace.com/public_html/wp-includes/class-wp-hook.php on line 303
 April 8th, 2009: Dinner | Food Embrace

Hi guys!  I am about to head up and put my jam-jammies on.  It’s been a long freaking day.  The roofers are gone and left around 7ish.  Scott and I took a peek at our new roof and it’s fantastic!  Just enough brown in it to match the house but dark and textured enough that the trim and eventually the siding can get changed out.

WHEW!  What a relief!  I tell you, getting a new roof put on is very stressful.  You have no idea how it’s going to turn out until it’s done and you just cross your fingers the entire time hoping it’s going to go your way.

And ours did!  Hooray!

Since they were here all day we did end up having to miss SF class this evening.  I’m not sure I’m in the right emotional state to handle class tonight anyway because I’m a freaking mess.  I’ll explain in a sec.  Now dinner! 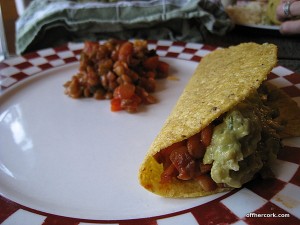 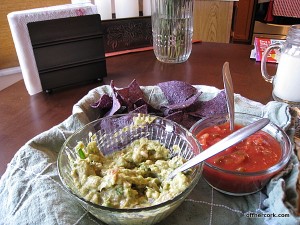 I had some avocados that needed used up so I made some guacamole.  YUM!  And to go with them, lentil tacos!  Recipe this Sunday guys, I’m going to try my hardest to get it posted for you.  I had one taco with guac on top and some extra filling on the side.  I ate my taco and a few bites of the filling with some guac and tortilla chips.  I also had some chips + guac while I was cooking.  I have no idea how much, I was drowning out my sorrows.  Not a lot though, maybe 7?

After dinner and cleanup, Scott and I combed the backyard to make sure there weren’t any nails or anything left behind.  Don’t want Rocky to step on something and get hurt.  Good thing we checked, I found a razor blade.

After the yard was clear, we played outside with Rocky so we could all let off some steam.

Being stuck inside all day today with the pounding and pounding put us all a bit on edge.  Especially Rocky because he didn’t know what was going on and why are there strange people in the yard, mom?  And stuff is falling from the sky!!  Plus with this new revelation about a possible injury I’m facing and getting a bunch of, “Oh that sounds very bad.” or “That doesn’t sound promising”, I’m about two seconds away from flipping my lid.  I don’t want it to sound bad and I don’t want to deal with an injury a few weeks out from a huge goal.

I’m not handling it well at all, let’s put it that way.  Seeing my 1/2 goal start to swirl down the drain is a hard pill to swallow.  I called the doctor’s office today but they were closed (at 3:30?!) so I have to call tomorrow and see when I can get an appointment set up.  I probably won’t be able to do my long run on Sunday because I don’t want to risk seriously injuring myself.  Unless I see someone before then and get the go-ahead.  Naturally my long run was going to be my first double digit run.

I’m off to drown my sorrows either in a pint or a glass of something.  Don’t judge.

It’s been a long day guys.  Tomorrow will be better!  Plus I’m attending something new, fun, and very exciting tomorrow evening that I’ll get to share with you all soon! 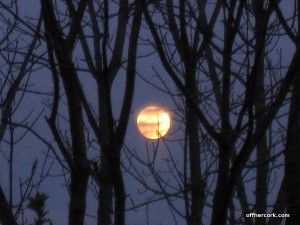