Warning: Parameter 2 to WPE\Site_Preview::the_posts() expected to be a reference, value given in /home/customer/www/foodembrace.com/public_html/wp-includes/class-wp-hook.php on line 303
 April 2nd, 2009: Dinner | Food Embrace

Whoa guys!  What was to be a short trip to Target after MT class turned into something longer than I expected.  This is what happens when I start looking at clothes.

Before conditioning class, I had my yogurt and granola snack. 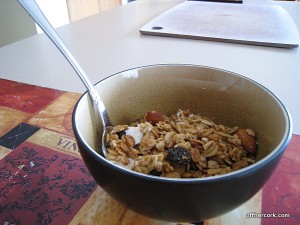 Let me tell you that changing my sprints/pickups days to Wednesday was the right move!  There would have been no way I could have handled class this evening had I done sprints this morning.  Goodness!

After class was the stop at Target.  I didn’t find any pants but did score some very awesome and cute undies along with some plain Ts to wear under shirts and things.  Also a very cute summer pj set.  Wooott!  I was so excited it was silly. :p  But again spent too long looking around because thunderstorms started while I was shopping. :o  I was cursing myself for not getting home sooner so Rocky could get an evening walk.

While we were checking out, it had stopped raining!  JOY!  We made it home and I was able to bust out a walk with Rocks before it started raining again.  Once home and showered, I tried my new undies just to be sure and oh the boy shorts I got are fabbo.  *squee*  Sorry fellas!!  (not really 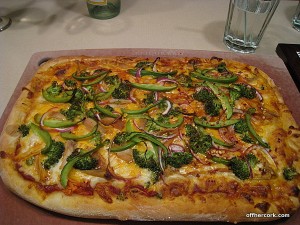 I almost put on some banana peppers but decided this was good to go. 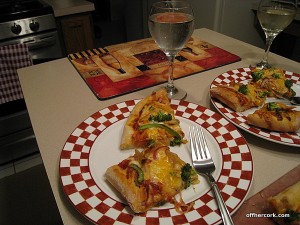 Here’s my plate along with a wine fizzie.  So good and totally hit the spot.  YaY!  The crust was amazing this time around.  It was a WF crust and I let it sit on the counter for a bit.  I think the extra time out gave it more time to rise and poof because it was perfect.  I had two bites of another 1/2 slice and was done.  I thought I wanted more but was very content!  Now it’s time to sit on the couch for a minute with my boys.