Hi guys!  Last night dinner was a bust in so many ways.  The restaurant was not good, the company was awkward, and I didn’t get any pictures.

Our friends called us Thursday night, but late, so I didn’t get the call.  They left a message about going out to dinner on Friday and to give a call back on Friday.  I waited until close to 3pm to call back because the hubs part of the couple is a teacher and I was waiting till he was done with work.  I re-listened to his message before calling and in it he mentioned to call his wife instead.  Doh!  So I called her, which I felt odd doing because I knew she was still at work and I don’t like calling people at work.

Quick tangent, I grew up under the rule that you do not call someone at work.  First of all they are at work, which means unavailable.  And second if you are calling someone at work, you best have lost a limb or are dying because it’s rude.  Nowadays because of cell phones it’s like there are no boundaries anymore.  Parents call their kids at school and during school (Wha the what?!!) and kids call  their parents at work.  Crazy.  Anyway, it’s not a behavior I can adopt. It still seems rude to me.

Meanwhile, back at the ranch, I called the wife.  She said that we could probably still go out but since they hadn’t heard from us they made plans with other friends.  They would get back to me.  And they did.  Once while I was indisposed, so the hubs talked with Scott, and then again to let me know that going out was on.

We went out to Ba Sho which is a sushi joint on Sawmill, for you Columbus folks.  We arrived first and I gave the name for the reservation.  Apparently everyone was meeting there: us, our friends, and their other friends.  I didn’t know that so I was a little confused at first.  One half of the other friend set and his kid arrived first.  We introduced ourselves and it was sort of awkward.  Maybe he didn’t realize we were all meeting either?  Maybe he wasn’t really down with the whole group thing?  I don’t know but it did make me squirrel my camera away.  Gut instinct told me that this probably wasn’t a good time to be taking pictures.

I always listen to that inner voice!

This was our first time at Ba Sho and I really hope to not go back.  They didn’t really have that many non-sushi dishes to eat.  And I didn’t want to get sushi since I can only eat small amounts of it, plus I might not have liked it.  And being a non-sushi lover around sushi lovers can be hard because they can’t understand how you don’t really care for sushi much.  I already got made fun of because I can’t use chopsticks which sort of set the tone for the rest of the night I guess.  I don’t particularly care for being made fun of by someone I just met.  So I stuck with “safe” foods.

The rest of the group showed up and we sort of chit chatted and made small talk really.  I went to the restaurant starving and I was so excited to go!  I thought it would be like our beloved Akai Hana and it so was not.

I wanted an appetizer, a noodle dish, and some veggie sushi.

You already know the sushi got kiboshed.  All their noodle dishes were like soup/brothy dishes which isn’t what I was looking for.  No spring rolls or anything like that to be found on the appetizer menu.  I got the tempura platter to start with and it was awesome!  It had shrimp and then a variety of veggies.  I ate most of it, thankfully Scott backed off, I think because he realized I wanted/needed the veg and my other stuff was horrible.

Awesome!  The best thing about the place.  For my main dish, I ordered the teriyaki salmon.  I asked if that came with veggies, “Oh yes, yes!”.  Okay good.

If you consider boiled greenbeans and baby carrots as veggies, then I suppose it did come with veggies.  Yuck.  I had all these lovely veggies with my tempura, they could be a side dish too! *sigh*  The fish was just cooked salmon with some teriyaki sauce drizzled on top, not exactly my idea of salmon teriyaki.  And the salmon was horribly, horribly overcooked.  I only had 1/2 and all the greenbeans.  The carrots were gross.  My meal came with a starter salad but Scott snagged it and ate it.  To his credit, the lady did hand it to him but she said, “salmon teriyaki” as she was doing so which means it was mine.  That’s okay, it was only some iceberg lettuce with sauce so I wouldn’t have gotten too much veg from that.

I boxed up my remaining salmon to be polite and we were out the door. Scott had the spicy tuna and shrimp tempura roll and said they were good.  Not Akai Hana good, but good.  So if you like sushi, then maybe you would like Ba Sho.

The childed couple left as the baby needed to get to bed, and our other friends were heading out for ice cream.  I was still hungry and feeling horribly empty and unsatisfied, so we passed on ice cream even though I would have liked to been able to hang out with them a little more.

Scott and I got in the car and decided on what to do next.

“I’m still hungry and there weren’t enough veggies for me.”

“I know that too. I was already trying to figure out what to do about getting you another meal.”

“Because I know you and I know when my baby isn’t happy.”

We actually didn’t go and get anything to eat, instead we headed to Kohl’s.  I needed to look at dresses because I don’t have any and Scott needed some new nice shoes.  We both got what we needed and I snagged a pair of shorts as well.  I tried on a pair of jeans that I loved but didn’t buy because they had that huge gap in the back, god I hate that.  This was huge like, I could stick both my hands down my pants all the way past my butt, big of a gap.  *grumble*  Would someone who works with clothes be able to fix that? Is that something that can be altered?  I don’t understand why companies do not make clothes for those of us with butts and hips.  I may have dropped weight but I still have curves damnit.

By the time we left and got home it was after 10pm.  I was pooped!  I changed into jammies and made myself a snack plate. 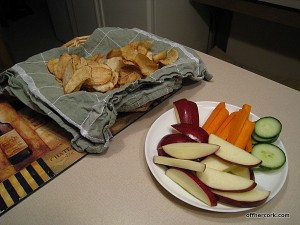 Carrots, cucumbers, and an apple.  Chips on the side because I wanted a little salty.  There are baked salt and vinegar, and some onion chips.

The carrot I had a few sticks of, since I had some earlier in the day, I wasn’t feeling it too much.  The cucumber was a different brand and not as tasty so I only had one slice.  I ate all of the apple.  I stuck mostly with the baked chips, having maybe 4 onion ones.  I already had fried tempura earlier so I wasn’t looking for more fried things. 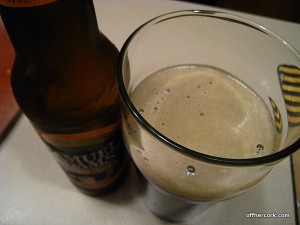 Scott pulled out a black lager and I sipped on some while we watched the Pens first playoff game!  They won, woot!  Now we just have to finish Friday’s game.

I got to bed late but I knew we weren’t heading to MT today so I thought I might be able to sleep in.  We’ve got a bunch of stuff we need to get done this weekend, hopefully we can be productive!