Warning: Parameter 2 to WPE\Site_Preview::the_posts() expected to be a reference, value given in /home/customer/www/foodembrace.com/public_html/wp-includes/class-wp-hook.php on line 303
 Why I run | Food Embrace

I always knew that in order for me to drop any weight I was going to have to run.  I’ve always wanted to be a runner ever since I can remember.  But dang running is HARD.  I had no clue how people could just run for miles like it was no big deal.  Marathon runners, wha the what?! Half marathons even, that’s long.  How do you even get to that point?  Because seriously, I would try and totally gas out in like two minutes.  I had so many attempts at trying to run under my belt it was ridiculous.

Three years ago, 2006, I decided to get serious about running.  I needed to drop weight and I knew that was going to help me.  I bought shoes and had a running plan created for me.  Scott was even running with me at this time.  We would get up in the mornings, drive over to a local trail, and run.  I learned that running takes time and practice just like everything else.  You start off running for a few minutes, then walking, and then running again.  After a month of doing this, I was able to run for an entire mile.  It was slow but I was doing it.

At this time I had also just started martial arts training.  Scott and I started stick and knife fighting (SF).  I had been doing that for about a month as well when disaster hit.  We were at a SF seminar and as I was training, I turned one way and my left knee cap went the other way.  I totally dislocated my left knee and it hurt like you can not believe.  Long story short, I was taken to the hospital, knee cap was put back in place, and I was in a full leg brace.  They sent me on my way with a pair of crutches and told me not to move my leg for an entire week and gave me the name of an orthopedic surgeon I was supposed to see at the end of the week.  The whole ordeal was horrible and I’m not even going to dwell on it.  The orthopedic surgeon I saw was the most misogynistic crusty older man I had ever met.  He wouldn’t even address me, he would only speak to my husband.  And his advice was that clearly running and martial arts were not for me and perhaps I should stick to walking on a treadmill “for your exercise needs”.  He also removed the full leg brace and told me to just start walking already.

Here’s the thing, when your leg has been immobile for an entire week, and your knee is swollen to the size of a cantaloupe, getting up and “just walking already” isn’t very easy.  When we were out of the office, I started crying and felt very frustrated and defeated.

But I didn’t let those feelings last very long.  I was stronger than that.  I wasn’t giving up being active, so I sought out a sports medicine doctor and he was able to handle the situation a lot better.  Lesson learned, if you are an athlete or train in anyway, always seek out an sports medicine physician.

That long background story is so I can tell you that I was off of any kind of training for about six weeks.  I had physical therapy three times a week and had to wear a knee brace 24/7.  Including sleeping.  That meant no martial arts and no running.

That set me way back and I mean so far back that I didn’t pick up running again for years.  Oh I was still training in SF and I even picked up an additional martial art, Muay Thai (MT).  But not running.  The thought of getting up early in the morning again to run, I just didn’t have the motivation anymore.

I found the motivation I needed in July of 2008.  Seeing all the food bloggers “going out for a run” or just completing a race was very inspiring.  I knew that I needed to run or else this weight was not going to go away.  I assumed that my MT training would help because it’s a very cardio activity, and while it did increase my cardio, it wasn’t enough to help me drop weight.  I finally realized that I had put unfair expectation on MT.  You can’t expect a miracle cure, one new activity alone isn’t going to change things unless you change your lifestyle fully.

I live in a nice area and neighborhood which makes it very easy for me to be able to go out my front door for a run.  I decided that I need to suck it up, get up early in the morning and start running.  People do it all the time, it cannot be that big of a deal. I informed Scott of my new mission.

My husband is amazingly supportive of everything I do.  And I did get up the next morning for a run.  And I ran everyday after that.  Everybody is different and I know that not everyone can start off this way.  For me, I had to because if I took even just a day off and didn’t do anything, it would be too easy for me to do that again the next day.  I found my motivation and I wasn’t going to let it slip away.

I started running just a tad over a mile around my neighborhood.  I would take one small break, no more than 30 seconds and start running again.  I knew I could at least run a mile because I had already achieved that once before.  Knowing I could do something was amazingly helpful.  “I did it once, I can do it again.”  It would take me 20 minutes or so just to run that little bit.  But I did it and every so often I was able to increase my distance.  And eventually walking breaks stopped because they became unnecessary.

When I started running, I didn’t love it.  I ran because I had to.  It was a necessary evil for me.  When Scott would ask me if I needed to take a rest day, most especially when the weather was less than ideal (I ran in freezing rain, snow, sleet…), my response was, “Chubby doesn’t take a vacation so neither do I.”  It became my tagline. Maybe that sounds harsh, but that’s what kept me going.

I eventually reached a point where I had to run.  I felt so blah and icky if I didn’t get a run in for whatever reason.  I needed to run.  I still didn’t love it, but I needed to get my fix or I would be really cranky otherwise.

Then after a few months of running and some weight gone, I realized that yes, I do love running.  Running right now is a huge part of my life.  I can’t not run, that’s not an option for me.  I love it too much. 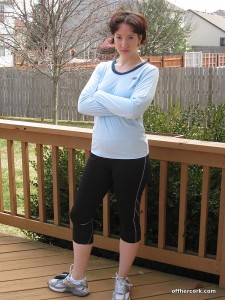 Not running is not an option

Every time I increase my distance that’s a new milestone for me.  In less than a year of running, I’ll be racing in my first 1/2, that’s 13.1 miles.  This absolutely floors me.  I’m still nervous about it because the most I’ve run at this point is 6.5 miles.  But dang, 6.5 miles, that’s a lot too!  And it’s only going to increase.  I’ll probably cry after that race.

That crusty old orthopedic surgeon?  He can suck it.  Not only am I doing TWO martial arts, but I’m running, and racing.

My name is Andrea, and I’m a runner.