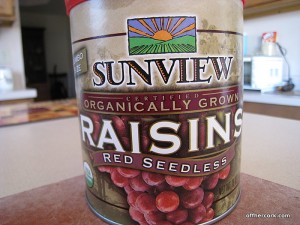 Oh man growing up I hated raisins.  Like even the thought of eating them was gag inducing.  The only raisins around when I was a kid were either some scary off brand things or SunMaid.  And SunMaid raisins are the worst because it’s like eating a box of pebbles.  My parents didn’t typically have raisins around the house too much unless my mom was making raisin pies or cookies for my dad, which he loved.  God knows why.  But some how every Halloween a box or two of raisins found their way into my little plastic pumpkin because some neighbor took an evil turn and decided raisins would be a better treat.  Really?

“Here’s a box of pebbles kid. Don’t rot your teeth out.  Take the quicker root and break them on these!” This is basically what a kid hears when that box of raisins drops into their plastic pumpkin like a ton of bricks (or pebbles?).

I’m sorry SunMaid but your raisins are not good and the animated girl you use now as your spokesperson is actually really creepy. But moving along, now that I’m an adult I have more adult-like and more refined tastes (shutup, I totally do!).  There have been times where I have had a dish with raisins and loved them.  The raisins were huge and plump and juicy.  Not dried out little gross things.  And it always baffled me because I had no idea where people were finding these raisins.

I thought maybe I just had bad memories of SunMaid and decided now that I was a real adult, to try them again.

I wasn’t wrong, they were gross.  I tried soaking them though to make them juicy and that didn’t work either.  However I can be extremely stubborn (it’s in my roots) and I wasn’t giving up!  Somewhere there had to be decent raisins.  And then I stumbled on these at the grocery store, in the organic area of the produce aisle. 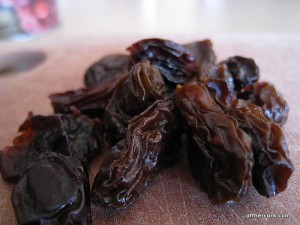 Meet the seedless red raisin by Sunview.  These things are the best things ever.  They are sweet and a little chewy and I love them.  I eat them enough that I decided it was time to give them their own feature.  I have only seen them at my local Meijer and I stock up on them when I can.  I eat raisins as my go-to snack when I’m hungry.  It helps keep the cranky away and it’s fruit so bonus right there.  They also have black and green raisins as well, but I have not tried those yet.  My heart right now belongs to the red.

If you don’t like raisins, I say give these guys a taste and see what you think.  And if you do like raisins, then these are like the golden ticket!  I highly suggest trying to find these guys.  I can eat them straight up and I’ve cooked with them as well.  And eaten them in salads, oatmeal, yogurt, you get the point.

And they won’t break your teeth either.  Score! Although I still wouldn’t hand them out at Halloween.