Hi guys!  I got so wrapped up in my to-do list today that I didn’t have time to post!  Recapping, last night saw a little of this: 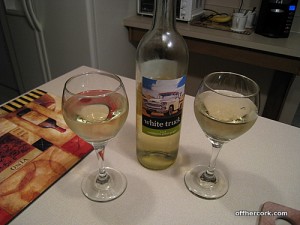 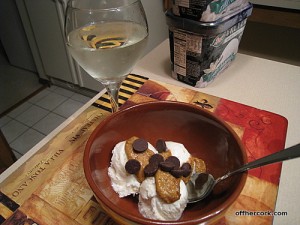 That first glass of wine was huge.  Somehow there was some miscommunication between Scott and I and he ended up pouring a huge glass of wine.  I sipped on that while we watched some TV.  Then it was time for dessert!  Another glass of wine was involved but only containing a splash of wine, not even 1/4C.  The rest is seltzer.  And some ice cream!  It’s been ages since I’ve had ice cream.  Three wee scoops of vanilla topped with melted PB and a few chocolate chips.  YUM!  Scott topped his with melted dark chocolate PB and I must tell you not to heat that stuff for more than 45seconds in the microwave.  Otherwise it will burn, smoke up the house, and smell like burnt popcorn.  I was willing to sacrifice my kitchen to present you with this PSA. You’re welcome.

Then I went to bed way too late!  Actually I think it was 10pm but goodness it felt later.  I got up this morning at 7:30 and this time change is still kicking my butt.  I’m going to have to figure something out!  I took care of Rocky and noticed how much cooler it was this morning as opposed to the last few days.  Booo  After he was taken care of it was time for breakfast. 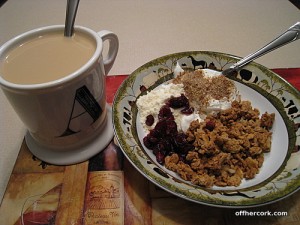 Coffee was amazing this morning and totally hit the spot.  I also had a small yogurt mess totally forgetting to add in the banana!  But it’s 2% fage with:

After breakfast I did some stuff on my to-do list and tried to organize my desk which I was only mildly successful at.  I made some lunch and took the easy route, leftovers! 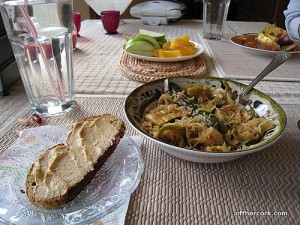 In that bowl is leftover zucchini and sauerkraut. I did not eat that entire bowl.

It was just easier to dump everything in that and heat it up.  I ate all my zucchini (about 5 stripes) and a few bites of kraut.  In the middle is a green apple and on the side is multigrain bread with some hummus on top.  I love bread + hummus, such a great combo!

After lunch it was time to run Rocky out for a quick walk and come home to tackle part of this: 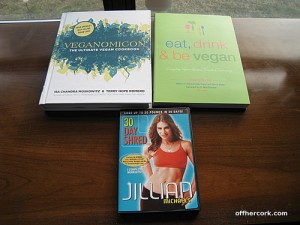 One of the packages I got last week contained my two new cookbooks and the 30day shred DVD.  No I’m not going vegan but am looking to widen my recipe knowledge and try some other things out.

I plopped in the DVD and it was level 1 today.  It wasn’t bad and the 20 minutes goes fast.  It sort of felt like that 20minutes was the warmup though.  So when it was over and done with I sort of felt unbalanaced, like, “Oh wait, that’s it?”.  It will take some getting used to.

After working out, I hit the shower and did some more work on my 1/2 training program.  It’s coming together.  I did a combo of Hal Higdon’s program and the one from Runner’s World.  Both had aspects I liked.  Hal’s incorporated strength training and RW used speed work.  I figured, let’s combine them and see what we get.  I would post that but I’m having some issues posting the spreadsheet.

I’ve got 8 weeks till the 1/2 and holy hell I’m silently freaking out.  That seems short and each Sunday I’m upping my mileage by another mile.  That seems like a lot!  And I won’t run 13 miles till the 1/2, my last long run being 10 miles.  EEEP!  So yeah, I’m a bit nervous.  Goodness. 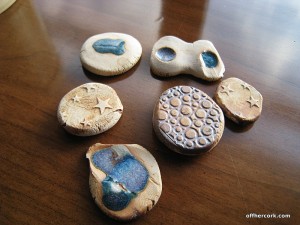 Another package I got in the mail was some change!  And a few other surprises that I’ll reveal to you soon.

I was deciding on what to make for dinner when I remembered that I had a package of udon noodles that I bought from WF. 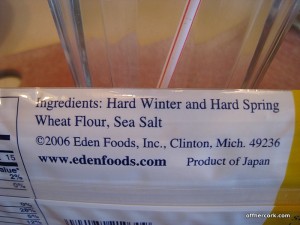 I decided to let the udon noodle dish I get at Akai Hana be my inspiration except mine has no chicken, just veggies.  I was majorly craving some veg and since it’s birthday week, I can have whatever I want. 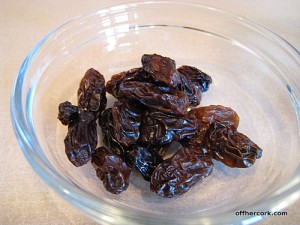 While I prepped, I snacked on some raisins. 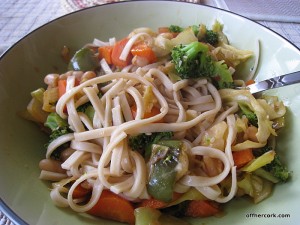 best noodle dish that I've made

I realize the beans aren’t veggies.

Just added in for some more volume and the onions, green peppers, and carrots, I chopped up into bite size pieces.  I tossed them with some olive oil, soy sauce, garlic powder, and curry powder, roasted them at 400 for about 10 minutes or so.  The cabbage I thinly sliced and sauteed up in some olive oil.  I blanched the broccoli and added that to the cabbage.  I added in the beans and the roasted veggies.  Mixed in some new teriyaki sauce (new sauce I found and love!) and some chicken broth.

Oh my I loved this dish!  Well it had sauteed cabbage in it which is a favorite of mine, so that pretty much guarantees I’ll like the dish.  It naturally didn’t taste like the restaurant dish but was a nice tribute.  It was so good and the udon noodles were soft and so yummy.  I couldn’t stop saying how much I loved it!

Now I’m off to relax a bit before heading to SF class, later guys! 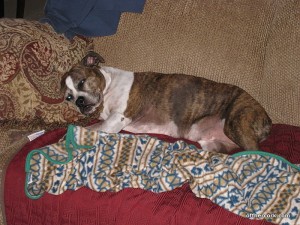 sleepin' on my pillow