Hi guys!  I finally got some yogurt up in here!  I bought 5 tubs of yogurt at WF today.  And I also picked up some goodies for a future giveaway.

Oooo excitment!  I was very cranky at WF because I was starving!  I wrapped things up quickly, especially since the wine and food tasting were about to start.  You can’t get anything done in that place once that starts because it becomes jam packed and crazy.

We came home and I was flip-flopping about what to make for dinner while I inhaled some raisins. No pic because I was too busy stuffing my face.  I also had four pistachios. 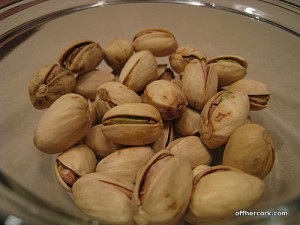 I decided on pizza so I could get some veggies in.  My original idea for this evening got pushed onto tomorrow. 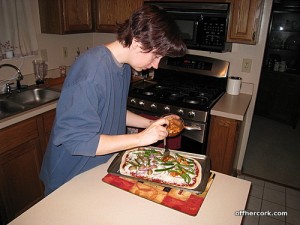 My arms look amazingly tan but I assure I am not in the least bit “tan”.  It’s probably just my Polish roots showing through. Us Poles tend to be a fuzzy bunch.

I also again look gigantic in my kitchen.  What is up with that?!  Maybe I have a dollhouse sized kitchen and I just don’t realize it? 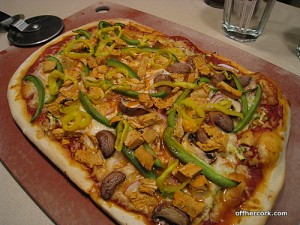 YaY pizza!  I picked up a WF pizza dough and rolled it out to fit the cookie sheet. I did my secret trick of shredded carrots and zucchini under the cheese. MMM On top is:

Scott’s side had mushrooms added. 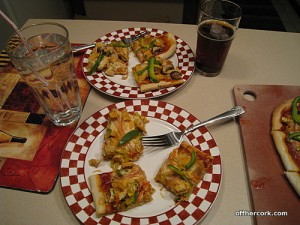 I had three slices but only ate 2.5.  That’s a Scotch Ale in the background that I had three sips of.  I ended up picking off the chik’n starters because they tasted odd.  I think it would have been better if I would have sauteed them up first and then added them to the pizza.  Otherwise everything was yummy!

OHC is pooped!  Over and out foodies.