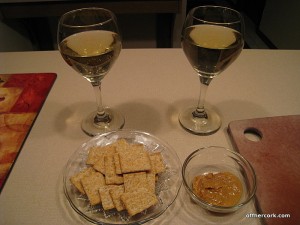 Hi guys!  So after dinner, Scott and I plopped down on the couch to knock out some Pens games.  And we had some wine because there was an open bottle in the fridge (From Sunday).  I had one glass and then a second.  That pic up there?  Is my second glass with some buzz eats because the wine went straight to my head. :o  Don’t be fooled though, that second glass is just a splash of wine and a lot of seltzer (cran-raspberry, heaven!).  I had about 5 kashi crackers with PB for my buzz snack.  Totally didn’t need them, wasn’t hungry but the wine was.  Jeesh.  I have no idea why it affected me so much unless it’s because I was really tired last night.  Nothing crazy and I didn’t over do it because I slept fine but it just seemed potent for some reason. 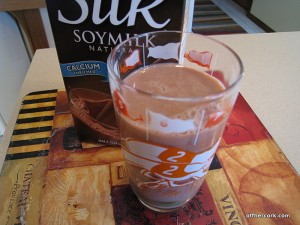 I got up at 6am this morning and got Rocks taken care of.  I snacked on 1/2 a Z bar while I was waiting for it to get light enough that I could head out for my run.  At 7am it was 7degrees.  Lovely.  Thankfully there was no wind so my run was pretty good.  I did 3.5 miles, I would have done longer by my face was cold.  I came in to have some CS and did some quick yoga stretches before making breakfast. 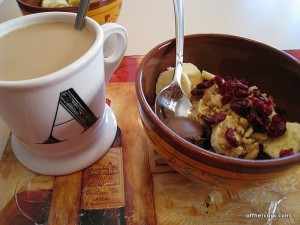 Oh how I love having breakfast and coffee after my runs and not before.  It’s so much nicer and makes for a more relaxing morning.  A big cup of warm coffee seems like a great reward for running in the cold!  I had oatbran this morning with my coffee, yum!  My mix-ins were:

I inhaled my bowl of oatbran!  It was good and apparently I was very hungry.  I did some bloggy stuff and office organizing stuff.  I don’t know if you guys read Angela but you totally should!  Anyway, she recently got her office organized and it looks awesome.  Her office is what Scott and I envision for our dream office.  Lots of dark wood with tons of built-ins.  Sort of like an English den or library inspried.  Seeing her office, I made a list of all the things I need to get for our office to make it snazzy.  Now I just need to shop!

After doing all that stuff it was time for some lunch.  Super easy! 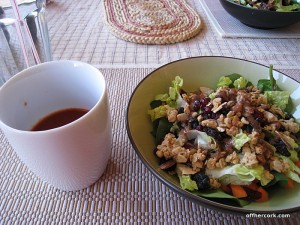 Soup and salad day.  The salad was:

With balsamic and oil.  And a 1/2 cup of tomato soup on the side.  I totally forgot fruit!  And didn’t even realize till I sat down to eat but by that point I was way too hungry to get back up.  I actually didn’t even finish my lunch so it’s a good thing I didn’t cut up any fruit or it would have gone to waste.

After lunch it was time to walk Rocky.  Whew it was cold.  Maybe not as cold as this morning but still pretty chilly outside.  We did a quick walk and now it’s time for me to get some more things done before MT class tonight.  But first a question!

Do any of you use a Garmin?  Originally I thought I was going to get an iPhone as my new phone but now I don’t think I am for various reasons.  With the iPhone out, that means running apps for it are out.  Therefore I need something that will help me train, keep track of my pace, and do a little bit more than my HRM does.  I love my HRM so much though that it pains me to stop using it.  But I do need something with a little more bang.  I was wondering what your thoughts are on the Garmin forerunners? 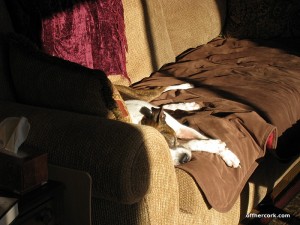