Hi guys!  I had another little bit of soda + seltzer last night while we watched a show and played some more Lego Batman.  We were at the end of one level and just about to snag the final piece of something we were collecting when Scott walked into another room causing the end fight to start and ending the level.  Doh we just missed that piece and I was staring right at it too!  We would have cleared the whole level if we could have just reached it.  Ah well, we can always replay it.

I was in bed by 9pm and read for about an hour and a half then it was lights out.  Last night was a much better night in terms of my throat.  I think it was all the extra water I drank before going to bed.  It was still a bit rough and sore but nothing compared to what I dealt with previously.  I was very thankful for that because I had a large run ahead of me and wanted to be very well rested for it.

Stupid cold.  Have you ever done that before?  So I got up and got moving.  I was very disappointed when I took Rocks out this morning to find it cold and windy.  Aw crap.  Couldn’t let it get to me too much because I needed to get this run in.  I changed and was out the door.  I added in a new section to my run because my goal was to get 8miles today.  That was the end goal but if I couldn’t do it because of my cold/lack of energy, I told myself that I would do as much as I could and call it a day. 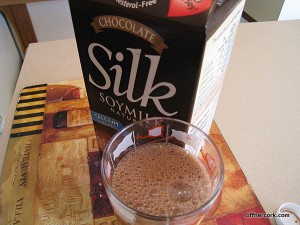 This was my longest run to date and man it was exactly that, long.  A few times I got bored but just zoned out and started focusing on other things that needed some attention.  That helped.  But music would have helped a lot more I think.  There were a few times when I thought there was no way I was going to make 8miles.  Not because of my energy level either, but because the damp cold and wind were starting to get to me and wear me down.  It was getting colder and windier as I was out indicating that rain was going to be dropping down soon.  I pushed through and completed my run.  I realized that once you reach a certain distance, and this will be different for everyone, your body sort of just goes on autopilot and keeps moving.  And it occurred to me that this is no big deal and I can totally pull off this 1/2.  It will be slow, I’m certain of that.  But I can do it.

In my head I did 8 miles exactly but when I checked my stats on my HRM at home, I’m now wondering if perhaps I ended up going farther.  I ran for 1:45 today which is a damn long time.  And my calories burned were pretty high up.  I’m headed out with Scott in a few minutes to drive the route I ran today and see what the total is.  Rule of thumb is that you burn about 100 calories per mile, no matter if you’re walking or running.  It can vary up and down but that’s about the average.  That seems to hold true for me, because my cals burned typically reflect my distance.  I’ll let you know what I find out.

When I got home I had two big glasses of CS and stretched my legs and hips like crazy.  I changed and headed downstairs for some much needed and anticipated coffee. 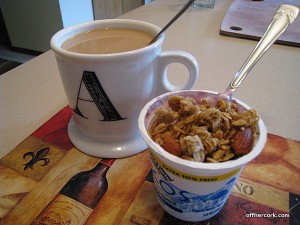 I had a blueberry Oikos on the side with some granola mixed in.  The coffee was amazing and the yogurt was okay.  The size of the yogurt was perfect though to hold me over till it was time to make Sunday breakfast.  Scott got up earlier than normal this morning and I headed up to shower.  Then I changed into some different jammies and had another mug of coffee.  So good!

Eventually I made my way into the kitchen to make breakfast.  Easy day. 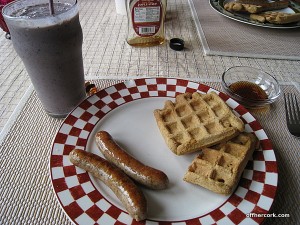 I pulled out some leftover waffles from the freezer and heated those up in the toaster oven while some chicken breakfast sausage browned on the stove.  I made us smoothies too, purple/blue monsters!

Blended to perfect delishishness.  Berries are my very favorite in smoothies, they add color and just enough sweetness to balance out the kale.  I didn’t finish mine though nor did I finish the sausage.  I was satisfied and this did not sit heavy in my tum or leave me feeling ooogy.  Hooray!

Alright guys, I’m off to measure my running route and enjoy the rest of my Sunday.  Catch you later! 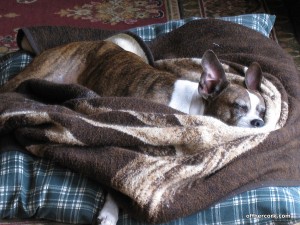