Hi guys!  I know my dinner posts are usually really quick, but last night we weren’t done with dinner till after 9pm, so I just kept hanging out on the couch.

Throughout the afternoon I kept picking at this bowl. 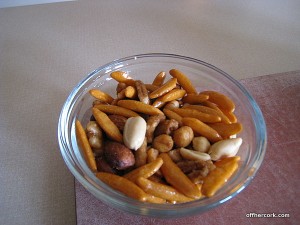 It has one of those nut mix pouches that Rose sent me, extra peanuts, and some rice snacks that Cheaplander sent me.  I couldn’t stop with the rice snacks, they were so good!

Finally it was time to make some dinner, and to make up for yesterday it was pizza!! 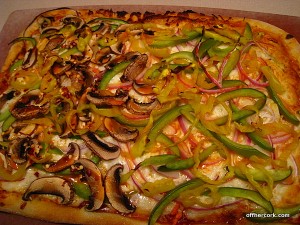 Wooo!  Veggie style.  Under the cheese is:

On top of the cheese is:

And Scott’s side had mushrooms.  Then I drizzled a little buffalo sauce over everything.

The crust is WF crust.  And I proceeded to drink a liter of seltzer yesterday. :o  Cherry flavor. 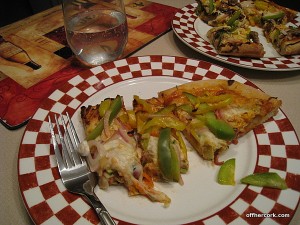 I had two slices, one was cut in half just in case I didn’t want a whole second slice.  But I did because it was delicious.

We watched the two hour epi of 24 and then I hit the hay.  I must say agent Renee is an idiot.  And the Pres’s daughter?  Also an idiot, you should have stayed in the vent fool!

My Ikea desk was not meant to be and I’m sad because it was exactly what I wanted.  It was $330 and they were going to charge me $150 shipping and tax on top of that.  I don’t think so Ikea!  Why would I pay almost half the cost of the desk just to ship it here (we do not live by an Ikea).  And they don’t warn you there is a freight charge until after you start the checkout process.  FAIL Ikea and I probably won’t order from you ever. Desk search continues.