Warning: Parameter 2 to WPE\Site_Preview::the_posts() expected to be a reference, value given in /home/customer/www/foodembrace.com/public_html/wp-includes/class-wp-hook.php on line 303
 March 25th, 2009: Breakfast and lunch | Food Embrace

Hi guys!  Last night Scott and I chilled on the couch for a bit watching the last period of a Pens game.  I wanted something salty so I made some popcorn.  If I would have had chips, I would have eaten those! 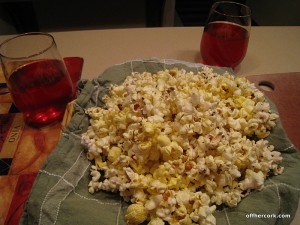 With a cranberry fizzie.  I only had a few handfuls of popcorn and then I was done.  Once the game was over I headed up to bed to read for a bit.  I was wiped out!  I complained to Scott that I wished I wasn’t sick so I could stay up longer and read. :p  I knew I needed sleep so I called lights out early.

Getting up this morning was a pain.  Ugh.  I tried sleeping in especially since it was pouring rain, but I got all sneezy and couldn’t get comfortable so I got up.  I took care of Rocks who was not having anything to do with the rain outside and then I poured myself some coffee. 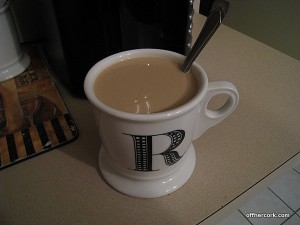 I want to taste coffee again!

Stupid cold is putting me off coffee!  It didn’t taste good at all yet I still drank it.  I did some stuff and then it was time to get Scott up.  While he was getting moving, I started making breakfast. 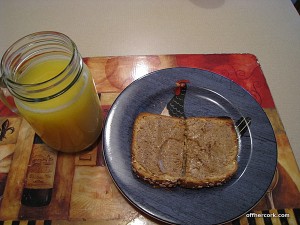 I had a slice of toast with some vanilla almond butter and some OJ.  Look at my jar!! 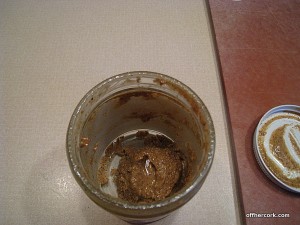 We have reached critical over here.  I’m hopefully going to WF tomorrow and I’ll take a look to see if they have some.  If not I don’t know what I’m going to do. 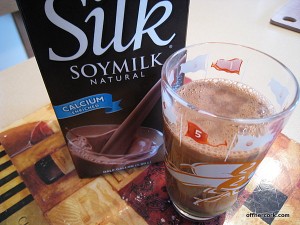 After my breakfast, I couldn’t take it anymore and decided to try a run.  I know, I know!  But it had stopped raining and I needed to move.  I went out and you know it started raining again as soon as I started running.  Whatever, I didn’t let that deter me!  I did an easy 2.5 miles and that’s it.  I didn’t want to push myself because I’m still fighting this cold.  I just wanted to be able to say I did something and have that feeling of accomplishment.  Plus Rose killed me with her running post so I couldn’t take another day of sitting on my tush.  It was a little rough as I felt tired, my body and my legs were doing fine.  The rain and wind were pretty nasty to deal with but I was so happy with myself when I was done!  I did it, woo!  Plus I also felt loads better!

Then I had a bit more coffee because the pot was still on and I wanted it.  It was yummy but did have the taste of sitting too long.  After Scott’s business call it was finally time for some lunch. 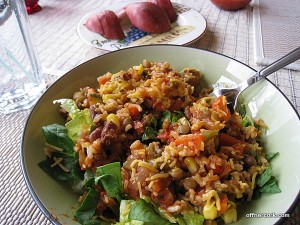 Hello leftovers!  I used the lentil taco filling and the beans&rice to make a taco bowl!  Chopped spinach and romaine are on the bottom.  In the middle is a red pear which I didn’t eat much of because it was mushy and gross.  Ew.

Now I have some more worky to do before it’s time to get ready for date night.  Wheee!!

I’m in the market for some nice office desks for Scott and I.  I am having trouble finding some that are nice and won’t cost me a mortgage payment in freight charges.  Any suggestions on where to look?  I did Amazon, all the Office stores, and Lowes/Home Depot.  What’s left? 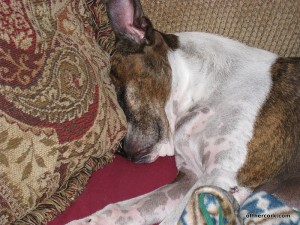 Rocky loves sleeping with his head totally smashed against something.