Warning: Parameter 2 to WPE\Site_Preview::the_posts() expected to be a reference, value given in /home/customer/www/foodembrace.com/public_html/wp-includes/class-wp-hook.php on line 303
 March 24th, 2009: Breakfast and lunch | Food Embrace

Hi guys!  I did cut Scott’s hair last night but unfortunately that was all that got accomplished.  By the time he was done cleaning up and showering, it was after 9pm.  Boo!  Too late for a meeting.  Not to late for drinks though. 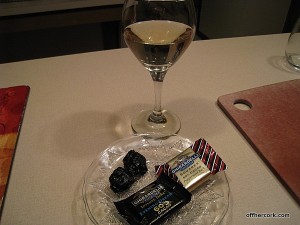 I was battling some girlie pains (sorry fellas but you’ll deal) and was in need of some chocolate.  There was a bit of wine left from Sunday so I split that into two small glasses to make it stretch.  I had two prunes (um, to help battle the chocolate) and two choclate squares.  That’s right, livin’ large! A 60% and a peppermint bark square.  I ate them both!  I much prefer munching on dark chocolate chips.  They take me longer to eat and I don’t eat much of them.  The squares are too easy for me to inhale quickly.  We watched a bit of a Pens game and then it was off to bed for me at 10:30.  I was pooped.

I woke up this morning so groggy and yucky!  My nose was stuffed, my throat scratchy, and I just felt really blah and icky.

Damn! I thought I kicked this cold!

I had some emergen-C while Rocks ate his breakfast.  I debated going for a run the entire time I was taking care of Rocky this morning.  I wasn’t going to go because I felt so yucky.  And it was cold and windy outside.  I figured I would make up today’s run tomorrow and give myself a break today. 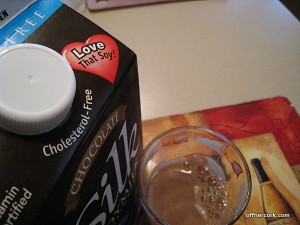 You know that didn’t last.  I started having exercise guilt so I changed and was out the door for a run.  As soon as I started running I knew I made the wrong choice.  I was sweating buckets instantly which was not like me and not the appropriate reaction for the cooler weather.  I was burning up hot and just wanted to turn around.  I told myself that I would just take it easy and run 2.5.  My body was not having it.  I was hot, tired, and my legs just didn’t want to go.  My stuffed up nose was not cooperating either.  I don’t know how far I ran, maybe 1.5?  All I know is that I ran for 20 minutes and headed home.  I burned almost 200 cals so it must have been 1.5 or slightly more. 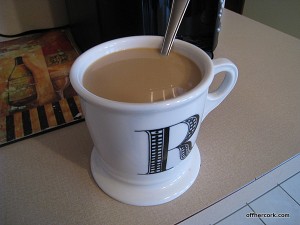 I changed clothes and poured some coffee.  Even that didn’t taste all that great.  Stupid cold.  At least it’s just me feeling blah.  I’m not down and out and I’m not stuck in bed.  I am thankful for this! 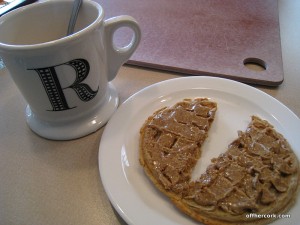 I got Scott up and then made some breakfast.  Easy and light.

Kashi waffle with some vanilla almond butter on top.  And a bit more coffee, I just wanted a little bit more.  Maybe I should think about having tea in the mornings?  Make a pot and sip on that.  And if I want more no big deal since it will be decaf.  I just don’t want to get hooked on coffee/caffeine and since I’ve been wanting more of it lately, it’s best to nip this in the bud!  I’ll figure it out.

After breakfast I showered and then took Rocky out for his walk.  It was nice out but breezy.  I think we’re going to have some storms and rain blow in soon.  After his walk it was time for lunch.  I still wanted something light and I wanted soup.  Weird, but sometimes when I’m sick all I want is some wonton soup.  I know, it’s bizarre.  Well we don’t have wonton soup so I opted for some Amy’s tomato instead. 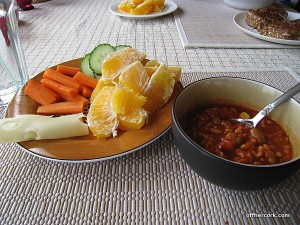 I added some lentils and some of the beans&rice from last night to it.  On the side I had a slice of swiss, a carrot, some cucumber slices, and an orange.  I had all of my soup, the orange, and only half of the swiss.  I ate most of the carrot and cucumber as well.

Now it’s off for a hot bath and maybe some tea?  I’ve got some work and organizing that needs done as well.  Hopefully I can still be productive today! 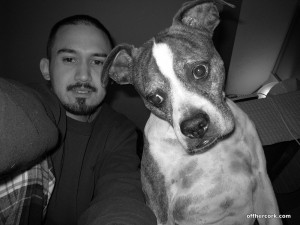 Oh, what's this down here!