Hi guys!  Happy Monday to you all!

Let’s not groan, it’s almost over (for us on EST anyway)!  I hope you’re having a good one.  Mine has been productive.  It’s productive in a sort of sporadic hurryhurryhurry!! kind of way.  I have no idea if that makes any sense but that’s how it seems.  I’m getting a lot done even though it doesn’t really feel like I am.  But let’s talk eats!  Oh starting with last night’s decadence. 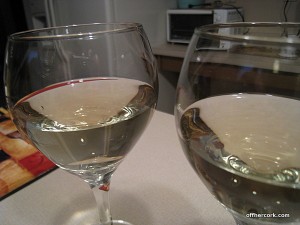 First there was a glass of wine. 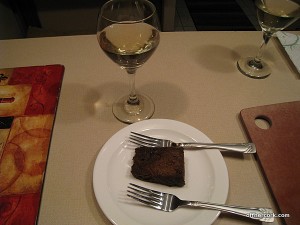 Then there was a second glass with some dark chocolate torte.  YUM!  Scott was the one who actually suggested that maybe we pull a slice out for a snack. :p  We split that to a point, I let Scott have more.  We watched House Hunters, My First Place, and Property Virgins while sipping and snacking.  I have to say the couple on My First Place last night were a bit, um, unrealistic.  They were looking for their “first and last” home.  First home and their last home because they wanted it to be their forever home and only home.  I understand buying a home that you can raise a family in, if that’s your goal.  But your only home ever?  Be serious.  Your kids are going to grow up and move out (I hope!) and you are going to get older. Not many seniors can take care of a huge 4000 sq. ft. house and the property it sits on.  They downsize which is a normal process.  To say you never will and this is the house you’re going to die in, is well a little naive and unrealistic.  And weird.  There I said it.

I went to bed way too late last night at 11pm because I got sucked into watching the Property Virgins trainwreck and I wanted to see how the situation ended.  It ended like most trainwrecks, with drama.  Crazy home buyer night!

I got up this morning around 7:30 and was a little groggy.  I could not wait for some coffee!!  Got Rocks situated and noticed how breezy chilly it was outside.  Brrr!  Hoping it’s not going to last!  Especially since some folks are getting snow.  Eep!

I’ll have none of that thank you! 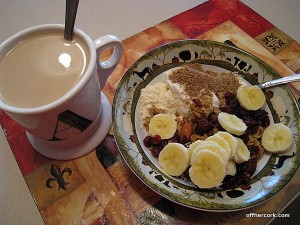 Came in and had a yogurt mess with some coffee.

Mmmmm!  I did some work related things and cleaned up my desk a bit.  Then it was time to get my loves up.  Is that too mushy?  Or do you not care?  Then I had another little bit of coffee.  Just a bit or else the tum would get upset.  I started laundry and did some bloggy stuff, and got some things on my to-do list knocked off.  One thing I’m looking forward to this week?  Date night!  We’re going out to a show later this week as part of my b-day activities. Stay tuned for more details.

I walked the Rockster around the ‘hood.  I was trying to also time it with the mail so I could just bring that in after the walk.  No such luck, mail was major late today.  At first I thought maybe today was some sort of federal holiday but no, the mail was just late.  Naturally when I’m waiting on payment for a project!

The mail finally arrived and but my check did not.  Grrrr!  That’s the one downside of running your own business and being an independent contractor, waiting on the moolah to show up!  A polite and professional business email was issued.  Let’s hope the check arrives this week!

Speaking of mail, I’m currently awaiting so many cool packages!  All part of some fantastic plans I have for the site regarding future giveways.  Whee!

Then it was time for lunch and I will tell you that all I wanted for sure was some cheese!  Light lunch which was awesome today. 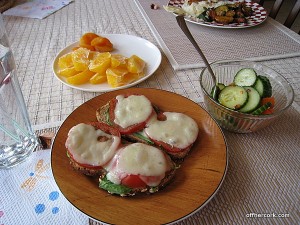 Multigrain bread with spinach, tomatoes, and topped with 1.5 slices of swiss.  Popped in the toaster oven to crisp the bread and melt the cheese.  On the side was a quick “salad” of cucumbers and chopped carrots dressed with:

And in the middle was an orange and some dried apricots.  I had 1/2 the orange and 3 apricots.  All of my chopped salad and 1.5 of the open-faced sammies.

After lunch it was more work.  I sort of feel like I’m juggling a lot right now.  Household stuff (which we all do so no big deal just adds to the pile though), business stuff, site stuff, and also new business stuff.  Scott and I have some ideas we are tossing around and trying to figure out how to bring to fruition.  We need to sit down and have a serious business talk it’s just finding the time!  I realize that probably sounds silly but trying to find time in the evenings or even weekends to actually sit down and have a long serious chat about things can be challenging.  I’m hoping we can get some things discussed tonight.

But fun things first!  I forgot to show you guys this! 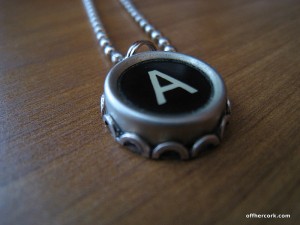 It was a birthday prezzie from my loves.

Scott and I are obsessed with things 30s and 40s (okay you can toss 20s in there as well).  We love that era!  And that is a typewriter key (the one you push to type, not the one that actually strikes the tape) from a 1940s typewriter.  It’s a necklace!  YaY!