Hi guys!  Sorry no post last night, I was feeling a bit under the weather and could not bring myself to type out a full recap.  We ended up going out to dinner last night.  I felt like going out with Scott and having a nice nite instead of staying home.  Before we left, I had an afternoon snack because I was starving! 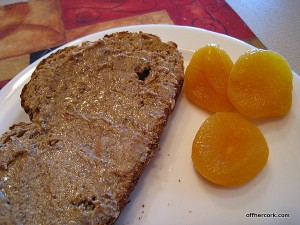 A slice of multi-grain bread with food of the gods, vanilla almond butter on top.  And three apricots on the side plus I had one before taking the picture.  Rocky also would like you to know that he had an apricot as well.  A little while later it was dinner time!  Originally I wanted some sort of pub/bar style restaurant and was chatting with a local via Twitter about options.  He recommended a place that Scott and I have been wanting to check out for a while but haven’t made it up that way yet.  However we will soon because it’s a brewery (although a chain) and I would like to try some of their beers. 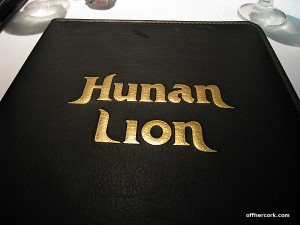 We changed tactics and decided on Hunan Lion.  The last time we were there, we didn’t really get to look over the menu in great detail because we were with friends who had been waiting on us to arrive.  This time we wanted to be able to take our time and really enjoy the atmosphere. 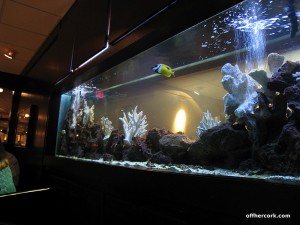 The first thing that greets you is the huge fish tank.  We were lucky enough to be seated on the other side of it and were able to watch the fishies go about their business while we dined.  I love the atmosphere of Hunan Lion.  It’s absolutely the perfect type for Scott and I.  We love nice quite places that don’t blast a ton of light in your face, blare crazy loud music, and where people remember to use their indoor voices.  The two times we have been there, both have been on Friday evenings and we’ve not had to wait for a table.  Perhaps we’re beating the rush?  I don’t view this as a negative though, it’s nice to be able to be seated right away especially when you’re hungry. 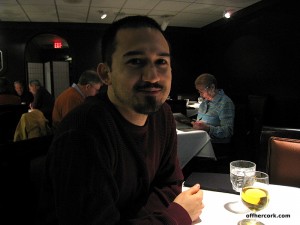 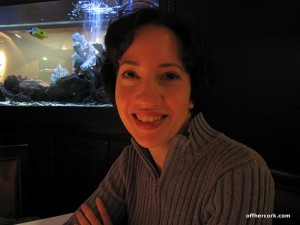 (Fact: Both of us do not think that either of these pictures is very flattering or look like us at all! So weird. Maybe it’s the lighting? I swear I’m way more cuter in real life.

We had a nice quite little table off to the side where only a few other people were dining.  Unfortunately there seemed to be a group of 5 close by and one of the women had that annoying laugh going on.  Not the kind where’s she looking for male attention, just an unfortunate result of genetics.  Naturally she liked to laugh at everything, we tried to ignore her as much as we could. 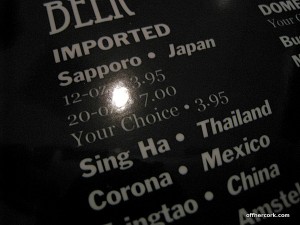 Thai beer, only choice for us!

We noticed the menu had changed since we were last there and it looks much better and more professional.  I would say it was a definite improvement.  We were both hungry and decided on an appetizer and to split a beer.  We ordered a Sing Ha (gotta represent), the server took the bottle so no pic of that. 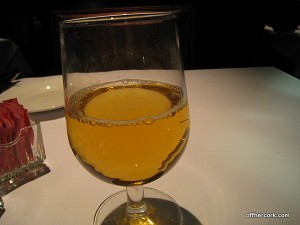 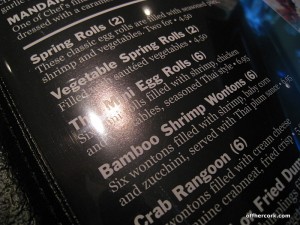 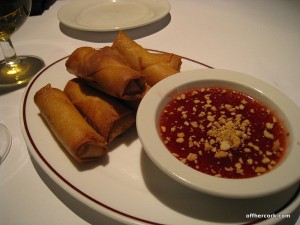 Curious, those don’t look the same as the ones I saw previously.  Those just look like egg rolls.  We thought that since the menu changed that maybe some of the food changed as well so we really didn’t think much about it.  We ate them, and I had 1.5.  They weren’t bad but not fantastic like I remember.  I also couldn’t find any hint of shrimp or zucchini as the description stated.  Weird. If these are the “new” bamboo shrimp, then I would not order them again.  A little underwhelming.

Scott ordered the Szechuan Seafood dish with came with shrimp and scallops.  He did have to ask about it though because the menu did not say what seafood made up the dish. 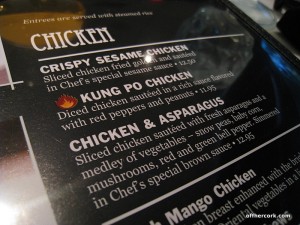 I ordered the Chicken and Asparagus with extra veggies at medium spicy.  We both chose brown rice with our dinners.  Hooray for places starting to offer brown rice!  Another thing I really like about Hunan Lion is how accommodating they are regarding dishes.  Meals that are not spicy, they have no problem making spicy for you.  And the fact that extra veggies is an option, is a definite plus in my book. 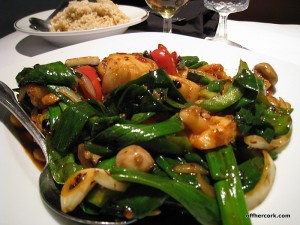 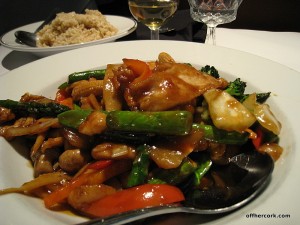 That’s seriously a lot of food!  I was amazed at how much food came with my meal!  I had one very small scoop of rice and about two scoops of my meal.  Along with a shrimp from Scott’s meal which was spicy!  My meal was very flavorful and had just the right hint of spicy to it.  However I did have an incident that left me feeling a little ill.

My meal came with asparagus and I’m not sure that they trim off the ends either enough or at all.  The last time I ate there, I bit into a very hard piece of asparagus.  It was a small piece so it wasn’t too bad.  I had forgotten all about that though.  As I was happily munching my food and chatting with Scott, I had the unfortunate luck of starting to eat a large piece of asparagus stalk that was not cooked.  It was the bottom piece and oh goodness chewing on that was awful.  It was like trying to chew down a sapling.  It literally took me several minutes to chew it.  Scott wanted me to spit it out in my napkin but the napkins were cloth!  Had they been paper, I would have spit it out in a second because I know it would just get tossed.  But spitting food out in a cloth napkin just seemed wrong to me because those don’t get tossed (at least I don’t think they do) and someone would find it as they were cleaning up.  Gross.  So I ate it.  Ugh guys even talking about it now makes me queasy.  I couldn’t eat after that.  I tried but if I had to chew something more than like three times my stomach would start to turn.  I stopped eating which was fine because I wasn’t hungry anymore anyway.  Not due to the sapling, just because I was content.

We asked for the leftovers to be boxed up including the rice.  You have to specifically ask for the rice to be included or else they will not box that for you.  We also asked that the appetizer just get put in with the rice.  This is when our server realized she brought us the wrong appetizer.  She said those were the Thai mini egg-rolls and not bamboo shrimp.  Ah ha!  We wondered about that!

We still had to pay for the egg-rolls though and she did not offer to bring us out the right order at no charge.  I was a little crabby about that.  Luckily both appetizers were the same price and the egg-rolls had been a consideration.  So I’ll get over it.  Now we know what they are like, always look for the upside, right? 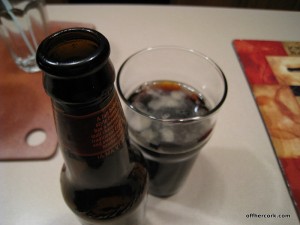 We came home and settled on the couch with a movie and a honey porter.  I only had a few sips of that though because my throat started to seriously hurt.  Like swell up and it was very hard to swallow.  Ick!  I headed to bed not long after the movie was over (Lost in Translation, for those curious) and had a emergen-C before going up.

I have to say, despite the appetizer mix-up and the sapling situation, our experience was a good one and we would definitely go back.  It seriously is the perfect restaurant for us.   If you’re looking for a relaxing and quite atmosphere either to end a long work week, or perhaps a special date night, consider Hunan Lion.  Just test the asparagus before you eat it! 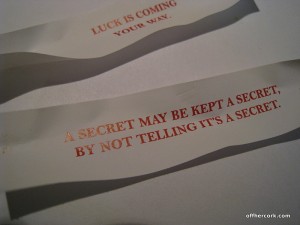 Mine on top, Scott’s on the bottom.  I don’t even know what his is trying to say!