Warning: Parameter 2 to WPE\Site_Preview::the_posts() expected to be a reference, value given in /home/customer/www/foodembrace.com/public_html/wp-includes/class-wp-hook.php on line 303
 March 1st, 2009: Dinner | Food Embrace

Hi guys!  Oh we took Rocky for a semi-long walk this afternoon and it was frigid outside!  The cold wasn’t so bad but the wind and gusts were a little brutal.  It was worse at that time than it was during my run early this morning. :o  Once we got back Scott and I played a little lego batman.

I made us a fizzie. 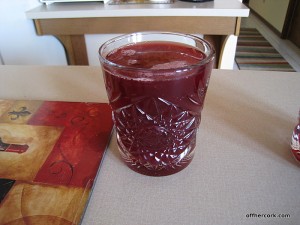 POM juice + 1/2 POM tea + seltzer.  YUM!  The POM tea I saw at the grocery store and decided to try it.  Mine flavor was POM + wildberry white tea and it was awesome!  It was even a light drink but no artifical sweetners were added and it was very yummy and perfectly sweetened.  One serving was only 35 calories.  Scott’s was the POM Peach and Passion fruit white tea.  I think I liked his better, however it did smell like pot and his breath smelled like pot.  So keep that in mind if you’re thinking of having some during the work day! :p  We played for a while and then took a break for some chips and salsa. 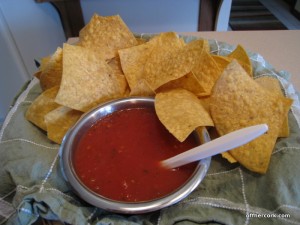 Gotta use this salsa up we got when we ordered Mexican!  And then we played some more.  Can you tell it was a total zone out kind of day for us?  While we were playing I started Sunday dinner which was a pork roast but this morning started out as mystery meat! I had this “meat” from the butcher wrapped up that said, “boneless sirlon chops” and I could not figure out what it was.  Sirloin chops?  Wha?  I wouldn’t buy something like that.  Finally I decided to just thaw it and see what it was.  The mystery meat package revealed a pork roast!  And then I remembered when I bought it the butcher said that cut wasn’t in the system yet, so she had to print a lable that said something else.  I told her I would remember.  So much for that! :p 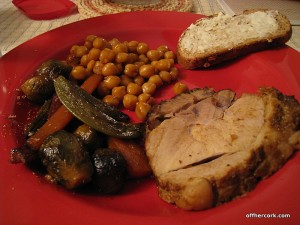 We had the roast with roasted carrots and brussel sprouts on the side.  I knew we needed something else so I quickly heated up some chickpeas with some BBQ sauce.  Those were fabbo and quick!  Dinner was great!  I had about 3/4 of the slice of roast, all of the veg, most of the chick peas, and that slice of multigrain bread in the back.  Mmmm!

Now it’s time for me to get back to being snug and possibly pour a glass of wine.  See you guys tomorrow! 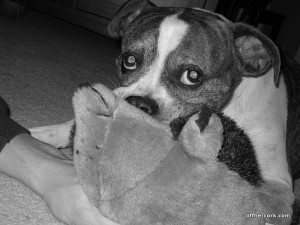