Warning: Parameter 2 to WPE\Site_Preview::the_posts() expected to be a reference, value given in /home/customer/www/foodembrace.com/public_html/wp-includes/class-wp-hook.php on line 303
 March 19th, 2009: Dinner (3 attempts, 1 success) | Food Embrace

I did not forget about you guys yesterday.

The end of the day was another cooking catastrophe for me.  Lord.  First I made some pizza dough and it was not right.  Very sticky gloppy starchy mess.  Just very wrong.  I dumped it.  I decided to just use WF dough instead.  Went to my freezer to find that I had no WF dough balls left.

Headed back upstairs for round two of pizza dough making.  This turned out better but it did seem to be like a small brick.  I dumped it in a bowl and kept an eye on it as I cleaned up the kitchen.  It was rising so I decided to let it do it’s thing.  I fed Rocky dinner and then sat down to some yogurt.  Finally!  I was hungry and very much wanted my yogurt fix. 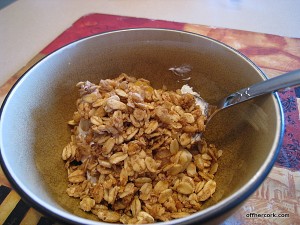 A bit of 2% with some mango agave almond bear naked on top.  Then it was off to conditioning class!  Which totally kicked my butt hardcore.  I’m thinking that I’m going to have to switch my Thursday and Wednesday schedules.  Because Thursdays are pickups which means I’m running full blast for a bit of distance.  But then adding in conditioning later in the day seems to take my legs over the edge.  For instance last night we had to do sprints and that means running full blast across the gym.  Well my thighs basically told me to stuff it as I was trying to run the sprints. And then all the lunges, squats and everything else we do, I think it might be too much in one day for my legs.

Anyway, when we got back home I checked on my dough and it had not risen anymore since I punched it down before we left.

I didn’t want to toss it, so I decided I would just lay it out on a cookie sheet and make a sort of focaccia type thing.  It was a very weird dough and not even sticking together.  I could pull pieces off and for dough, you should not be able to pick it apart like that.  I showered and got into jammies, and tossed the bread in the oven.

I came in to check email and talk to Scott about home stuff for a few minutes.  I went back in the kitchen to check the bread and the smell alone told me something was wrong.  It was not baking bread smell, it was a very sour and bitter smell.  Gross!  I quickly pulled the bread out and it was hard as a rock.  I took a small bite and yes it was indeed gross.  So I tossed it.

But what is up?  My yeast must have went bad because the only other things in the mix were flour, water, sugar, and olive oil.  My oil isn’t bad and nothing else is bad.  What happened to my yeast?

Now what was I going to do for dinner?

I made Scott a pita pizza and pulled out this veggie roll that I got at the bakery last weekend.  It was a roll stuffed with all kinds of veggies on the inside.  Right.  Not so much.  I cut into it so I could only have half, realizing that it was mostly dough and not so much veg.  Here’s my plate. 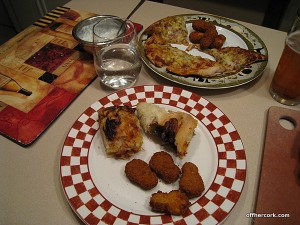 The roll originally was about 6 inches long and about 3 inches wide, you can see what I ended up with.  Plus 4 morningstar buffalo nuggets.  There’s ranch dip in the middle made with fage.  With some cherry seltzer.  I sat down on the couch with Scott and started eating my “dinner”.  I had two bites of one piece of veggie roll and all the veggies were gone leaving me with a ton of roll.  Clearly this was not going to work as a dinner.  I got up and put it away.

Then I made myself a pita pizza.  Basic cheese with some buffalo sauce on top. 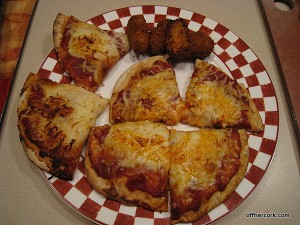 That’s my pizza on the right, the other slices on the left are Scott’s 2nds that I was taking to him.  And still my buffalo nuggets.  I sat back down on the couch and started eating dinner.

I had two nuggets and they tasted really salty to me and I was not feeling it.  I had two slices of pita pizza and that wasn’t doing it either.  In fact I had to force the second piece down.  I set my plate down and thought about what I wanted.  I wanted something light with veggies.  I was hoping to get my veggies in with pizza but clearly that wasn’t happening.  Plus I needed something quick.  I decided on a salad. 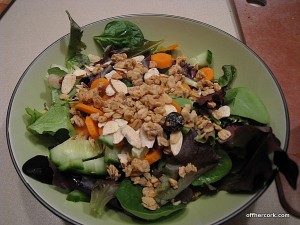 Topped with balsamic and oil.  I sat back down on the couch to eat my dinner. For the third time.  This was finally a success and I did not get any dressing in my eye, so score!

By the time I was done eating, it was about 9:30 and I was so cranky.  I figured it best if I just stay away from the computer.  I headed to bed at 10pm, got a very small amount of reading in and then hit the hay.  Goodness.  Today will be better!