Warning: Parameter 2 to WPE\Site_Preview::the_posts() expected to be a reference, value given in /home/customer/www/foodembrace.com/public_html/wp-includes/class-wp-hook.php on line 303
 March 19th, 2009: Breakfast and lunch | Food Embrace

Hi guys!  Post a littler later today due to Scott having a conference call during our regular lunch/cleanup time.

Last night we got back from SF class late, going on 10pm.  I was very thirsty and starving.  I had some seltzer while munching on… 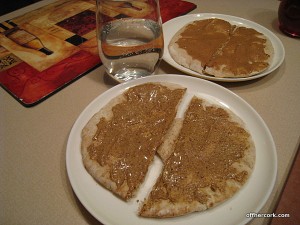 a toasted WW pita topped with vanilla almond butter which is a gift from the gods.  Good lord I love this stuff.  In fact, I don’t even remember the last time I had dark chocolate PB that’s how much this stuff has taken over! :o  I know!  After my snack, I read in bed for a bit and then it was lights out by 11:30. I was wiped! 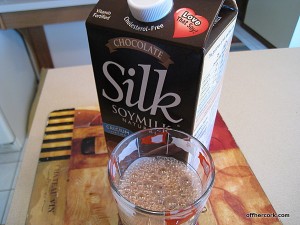 I got up a bit earlier this morning to see if it was light out and it was, so I dragged my butt out of bed at 7:15.  Took care of Rocky and then headed up to change into running clothes.  Rocky for some odd reason thought we were going back to bed and followed me upstairs.  He looked so dejected when he realized the bedroom door was closed.  Sorry kid, papa is sleeping!  You’ve got sofa city duty!

I was able to wear capris this morning for my run and it was awesome.  I love these stinkin’ pants so much.  I did four miles at a 10:15 pace which is my fastest pace so far!  And then I did four pickups after that which I hate.  I feel like such a tool doing pickups.  Like I look like one of those cartoons characters revving up to take off full blast!  I love running full blast though, how can I do that all the time?!  My pace would be amazing. :p

Came home, hit the CS, and stretched.  And then I showered.  I am ready to not be cold when I step out of the shower, that would be lovely.  After that, I made a big honkin’ breakfast.  I almost made oats but then oatbran was staring me down saying oats are stodgy whereas he’s all edgy and hip.  So I went with edgy and hip today. 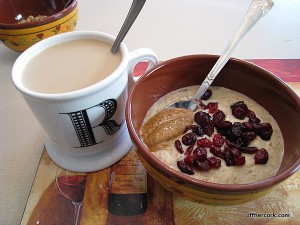 Mondo oatbran with just some cranberries and yes, more almond butter.  It was an amazing bowl of oatbran!  A large portion and very creamy.  I’ve been adding just a bit more soymilk which makes all the difference!

With morning coffee that just knocked my socks off today, it was very fine.  After breakfast, it was time to head out for Rocky’s walk.  It was cool but very awesome outside.  If I would have worn a toboggan and gloves it would have been perfect.  What can I say, unless it’s 60F and no wind, I need a hat otherwise my ears get cold and hurt. 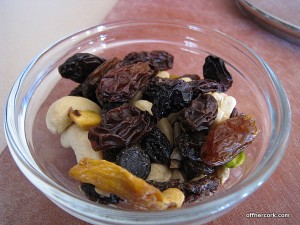 Once back home it was time for some bloggy stuff!  And waiting on Scott’s call to happen so we could eat some lunch.  I munched on some trail mix to tide me over. I was starting to get hungry.  Finally the call was done and by this point we were both very hungry. 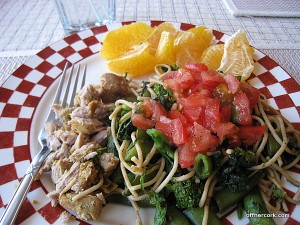 My plate looks huge but there’s really not all that much on there.  I had leftover pasta from last night with some chopped tomato added in.  The leftover tuna which I didn’t eat because it tasted weird.  No idea what happened there!  And 1/2 an orange.  Content for now but it’s not enough so in a bit I’m going to have some yogurt and granola.

Now I’ve got to clean the house and bust out some pizza dough!  Later guys!