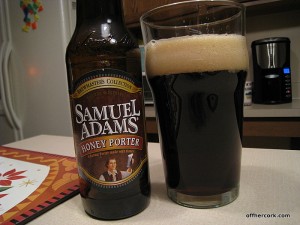 Back when I was in college is when I first came in contact with beer and thus started my journey sampling brews.  Even in college with little money, I tried to stick with good quality beers.  There was no Beast or Coors or Bud to be had.

My friends started talking to me about Sam Adams Cherry Wheat beer and how awesome it was.  “It’s fruity, like juice!” They said.  Interesting, I thought.  I saved my pennies, because even though I was drinking “the good” beer, Sam Adams was still expensive and beyond my budget.  Once I saved enough, my friends and I trekked to the campus pizza shop for a slice and brew.  I bought a cherry wheat.  “Here’s to fruit juice!” and then I took a sip.  Which I promptly gagged on and gave the remaining beer away as quickly as possible.  That was my first encounter with a wheat beer and it was not a good one.

Since then I’ve avoided Sam Adams, blindly assuming all their beers were of the wheat variety (*shudder*).  Scott also had no education of the Sam Adams kind, so he was no help and thought the same as I.  Then one day we threw caution to the wind, because we needed to start trying some new beers again.  Coronas and Killians only go so far my friends.  They only go so far.  We picked up a Sam Adams and had a good experience with it and have been testing out their different beers for a while now.

There is where my new affair with Honey Porter comes in.  If you’ve been with OHC for a while, you’ll know that me and dark beers go together like pretzels and salt.  We love one another and when I can find more to add to my little family, all the better.

The first thing I do when trying out a new beer is pour it into a glass and check out the color.  I have a range of colors I like and the darker the beer gets, the more giddy I get.  Imagine my enthusiasm when I poured this sweet goodness out.

Then I smell the beer, to see what kind of aromatics it has and to give me a sort of preview of what’s to come.  My favorite smelling beer so far is Cabin Fever, which I already did a review of here.

Honey Porter had an interesting but not overpowering smell.  It was very subtle which meant I wasn’t quite sure what to expect when I tasted it.  This beer is very, very smooth and rich.  It has a nice little bitter twist at the end that is not overwhelming nor does it sit on your tongue too long.  It’s a little on the thicker side but does not cross the line and head into evil syrupy territory.  This is a great sipping beer but it also pairs well with foods that have some umph to them.  Meats, of course, and I’ve also had it with pizza.

Since this is not a seasonal beer (hooray!) that means I can get it all year around.  Scott loves this beer as well and that means we need to have it on hand at all times.  We already had one “Situation Critical” status develop when there was only one beer left in the fridge.  We have since been to the store and purchased more, bringing the alert level back to “Situation Normal”.

If you like darker beers then I suggest giving Sam Adams Honey Porter a try.  They aren’t just wheat beers you know!

P.S. Normally I would link to the beer, but Sam Adams is requiring people enter in their age.  If you go to the website, you can learn more about the beer if you’re interested.