Hi guys!  Sorry about not posting again last night.  By the time we got done with dinner and sat down on the couch it was 10pm.  Ouch!

We had some errands to run yesterday in the name of shopping.  Scott needs some new stuff and I wanted to look for some shoes.  I know exactly what I want (rugged mary janes) so out we went.  I also wanted to stop by Pier 1 which I know is on Sawmill but that didn’t happen because we didn’t see it and just moved on.  Of course we found it on our way home.  Nice.  Anyway, we ran into Filene’s Basement because they have both men’s and women’s clothes plus a DSW on the side.  I checked out shoes first and found nothing other than two stock boys following me around.  Huh?  “Why are you following me around?”  Is what I wanted to ask them because they were literally in my way. Several times I almost ran into them as I was turning the corner to head down another aisle.  I did not find the shoes I was looking for.  Filene’s was packed yesterday.  Chaos.  The way the clothes were organized made my head explode a little bit.  It could be arranged much better.  I tried on a few things, none of which I liked.  However, it was a nice feeling to not get something because I didn’t like it as opposed to not getting something because I couldn’t find anything that fit.

Then I found Scott and he was showing me a few things he found and that’s when I stumbled upon a hoodie.  It was black and had a sort of design on the front left and then a nice skull design on the back.  Oh it’s hard for me to resist skulls so I bought it.  It’s very comfy!  I also found a lovely frame and bought some dark chocolates.

Then it was over to Bed, Bath, and Beyond where I got a few things for the house that I needed.  And then I saw they have a whole sort of “beauty” section.  Whoa!  That was a first.  Make-up, shampoos, all that stuff.  I found my nighttime face lotion, and also the lotion that helps you shave less by Aveena.  I haven’t used that stuff in years because everyone stopped carrying it!  So I picked up two bottles of that as well.  Sweet!  And then it was back home because I was pooped. 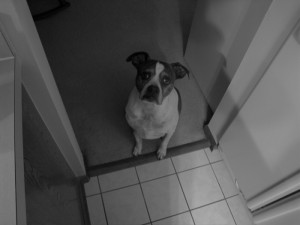 Once home, I leashed up Rocks and got him out for a quick walk.  Then fed him when we got back home.  I pulled out the roast for dinner so it could come to room temp.  I had it sitting in a brine all day.  I rubbed it with some seasoning and let it hang out.  Then I put out some snacks for us because we were both hungry but it would be a bit before dinner. 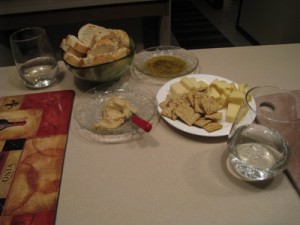 Some of the same stuff from Saturday night and some changes.

I had 1 bread w/ oil and 1 bread w/ hummus.  I had 2 parrano and 1 swiss (I think).  And several crackers with hummus.  I made a wine fizzie for Scott and I had straight seltzer, two glasses.  I called my mom and then after that the roast could finally go in the oven. 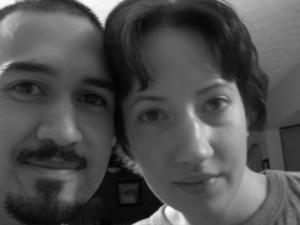 We listened to 40s while snacking and dinner was roasting.  One thing I love about this XM/Sirius station is that they play news reels from that day in 1940-whatever.  So last night’s was from February 8th, 1949.  So cool!  And sometimes they play old radio shows as well.

Also love black and white photos because it doesn’t matter if I have makeup on or not.  Which is usually not, I don’t wear it too much.

Finally it was time for dinner! 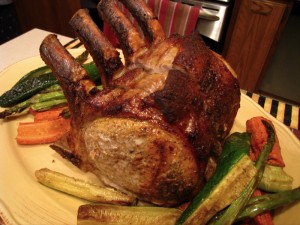 The first official birthday week meal for my babycakes. 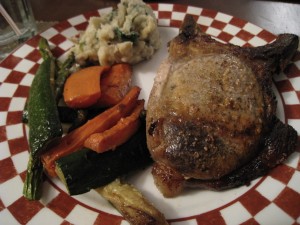 The veggies were leftovers from Saturday and also some carrots.  There was spinach and artichoke mashed potatoes with carmelized onions and some gravy in the middle.  I did not eat that whole chop, about 1/2  It was awesome.  So tender.  A small dollop of mashed potatoes with a bit of gravy and all of my veggies. 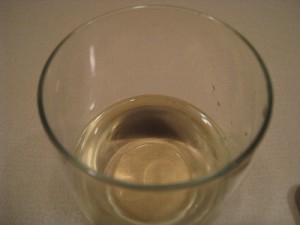 I was going to leave the dishes but then decided to just do them quick.  Once that was done it was time for the couch!  I had a glass of pinot while we watched some TV.  Then I had another 1/2 glass with a piece of dark chocolate. 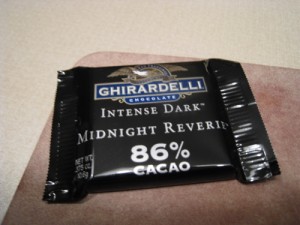 Wow that is some seriously dark chocolate!  But not bad!  Then when I should have went to bed I got sucked in to some Robot Chicken (they’re only 15 minutes, I said to myself) and finally called it a night at midnight.  Way, way, way past my bedtime!

Sorry this is so late! This morning my computer told me it ran out of space (again. Ahem.) and stuff needed cleared off before I could import my pics and do this post.  Booo not the way I wanted to start Monday.