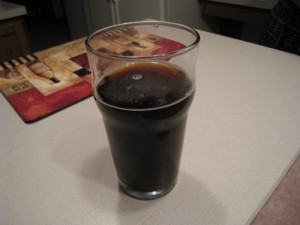 Hi guys! I did indeed split a Cabin Fever with Scott last night.  And when I say “split”, I mean Scott had most of it.  I have found that I don’t need an entire beer to myself anymore and spliting it is my answer.  I still get to sip on some awesome brew and have as much as I like without feeling like I either have to finish something I don’t want or toss a good beer.  And we all know that tossing a good beer is illegal and we are nothing but if not total law abiding folk on this end.

I was still feeling a little munchie.  Snacks were good but left me a little empty.  I opted for a fruit plate of sorts. 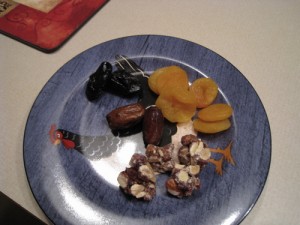 Apricots, plums, dates, and 4 crack squares.  I only had one date, I think they dried out, they were not as good as usual.  3 crack squares, both plums, and some of the apricots.  Not all but I don’t recall how many I did have.  That was perfect!  I was fully satisfied after that.  We finished the Pens game from Friday (let’s not discuss it) and watched 24.  Then it was going on 10:30 and I was wiped out.  I headed up to bed.

I slept like crap last night and taking a walk around the blogsphere it seems I’m not the only one.  I’m labeling that as just odd.

All the mush that was the result of the warm temps yesterday froze over leaving everything just a plain old mess.  It was chilly but not too bad out this morning. 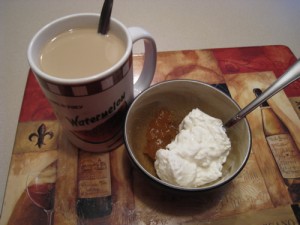 I had some fage + apricot preserves and morning coffee.  Read blogs and saw the Steelers won the bowl.  Good job Steelers!  And then got Scott up and I got dressed for the day.

I started some laundry and quickly realized that my yogurt didn’t hold me over too well this morning.  I busted out another snack plate. 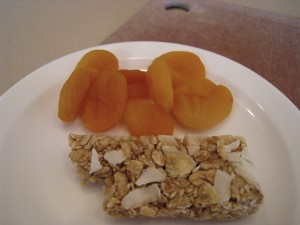 Quaker true delights coconut banana bar and some apricots.  I only had 1/2 the bar (too sweet) and all of the apricots.  Then I got started on my to-do list, most importantly is planning for Scott’s b-day next week.  Over here at the OHC HQ birthdays are celebrated all week long.  None of this one day business.  Nope, you get to be a superstar all week long!

And I started planning out the menu for that week of all things Scott loves.  As I was plugging in meals I quickly realized that most of them revolve around meat.

So I’m trying to space things out a bit and do some working so that there are veggie options for me because I just don’t want that much meat all week long.  Scott said he didn’t either (who is this man?!) so now I’m working it so there are more veggie options for us both on a few days.  It’s taking me some time!

After fiddling around with that, I got started on some lunch.  I am still on my spicy kick (who am I?!  I’m not normally a spicy girl.  Well not in terms of food.

) and knew I had to incorporate some spice.  I’m also trying to “detox” because I feel like I had too much crap over the weekend.  In reality I know that I didn’t but my body feels like it.  So fruits and veggies here I come. 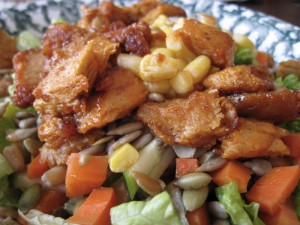 I opted on making a largish salad for lunch and sticking with that.  I ended up making a buffalo “chicken” salad and it was so good!  I sauteed up some chicken strips starters (morningstar, so they’re veg) and chopped up the two leftover buffalo nuggets from Saturday.  Then I tossed all that in some buffalo sauce.  In the salad was:

Topped with the chicken strips.  Then I put buffalo sauce over the whole salad.  Oh my goodness this was awesome!  The veggies keep it light and the sauce gives it kick.  I will totally be having this again!

Somewhere in there I took Rocky out for his walk.  It was icky outside.  All the buttheads who didn’t shovel, everything is frozen over making for some not fun walking conditions.  Rocks is done with the snow, he told me.  And we’re supposed to get more tonight!  Blergh.

I see a lot of people gearing up for valentine’s day.  Truthfully Scott and I do not celebrate that day, we both think it’s silly.  Do you celebrate it?