Hi gang!  Last night Scott and I chilled watching some tube.  We watched Lost, Chuck, and a Planet Earth.  Chuck was the 3D episode which was so bad it wasn’t even funny.  The PE segment was Great Plains and it was horrible.  It seemed very poorly put together and totally random, not making much sense of the footage they were showing.  Weird.  While we watched TV, a honey porter was involved. 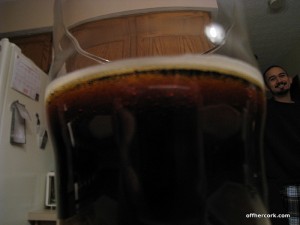 I orginally wasn’t going to show this because we all know what honey porter looks like by now, right?  And I had maybe 3 sips, the Mexican food left me feeling a little bloated and icky so carbonation wasn’t something I wanted or needed.  However, I did take a picture of it and had to post it!  You can see my love in the background wearing his plaid jammie pants and I’m assuming, laughing at some of my fantastic witty humor.  Or I guess he could have just farted.  I don’t really remember.

About 11ish I hit the sack.  Sleeping in was not happening this morning as Rocky said we needed to get up right now! That was at 7am.  I got him taken care of and holy my it was crazy cold outside this morning.  Boo. I guess I can wash my running capris since they are not going to get worn again anytime soon.

I poured a mug of coffee and tried to catch up on bloggy stuffs.  No pic because my mug is dirty and gross looking which I refuse to show on the blog. It was the R mug and you all can picture it.

And then I started looking around for races because I feel in a running rut and need to get motivated to up my milage and train!  Then plaid jammie pants got up and I headed into the kitch to make some breakfast. 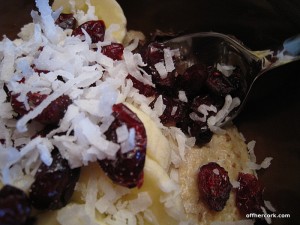 Oatbran!  I mixed Quaker oatbran with some Bob’s Red Mill oatbran and it came out awesome!  Bob’s is a little thicker cut so the result is more texture and less super creamy.

My mix-ins were 1/2 sliced banana, cranberries, coconut, and some dark chocolate PB.  I inhaled that stuff!  I must have been starving or something.

Now let’s talk races!  I’m looking at two right now.  One at the end of March, a 10K along river front about 1/2 an hour away.  The farthest I have run is 5miles, adding another mile won’t be a problem.  Or at least it shouldn’t be, and I should be ready for the 10K at the end of the month, right?

The second race is a 1/2 in May.  May 2nd to be exact, downtown.  I should have plenty of time to get ready for that too, right?  Goals help me stay focused and I need some goals!  Because my running, while I still love it and enjoy it, is starting to feel a little stagant.  I need some umph!

For the 1/2 I will clearly need help.  Some sort of racing guideline and training program.  Thoughts?  Coach to a 1/2?  Coach Al?

What are you thoughts?  Do you think I could do these two races?  Is May a good time for me to plan a 1/2?  Where should I turn for some good race training advice and where should I get a plan from?

Thanks lovies!  Now I’m off to hit MT class.