Hi guys!  It’s raining today which means no run for me.  Boo.  And sadly I think the weather is turning back to cold.  It’s colder out now than when I took Rocky out this morning and it’s super windy.  *lesigh*  I was really loving the spring like weather.

I got up this morning at 8am!  Craziness!  I took care of Rocks and came in for a light breakfast.  I wasn’t super hungry so opted for something easy. 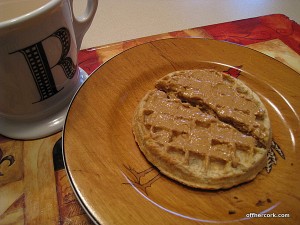 A kashi waffle with maple PB on top along with morning coffee.  Wow that PB is sweet.  The maple didn’t hit me right away but once I tasted it that was all I could taste.  I thought the PB was just okay and am a little bummed by that because I assumed I would love it!

My loves got up and then I started going around the house cleaning.  But before that, I had a small snack. 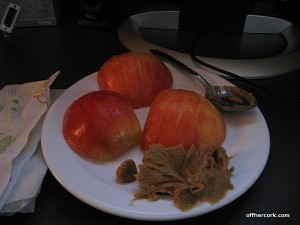 A honeycrisp apple with some maple PB.  Too sweet of a combo so I just ate the apple.  The PB is a bit gritty and I’m not sure if that’s the sugars from the maple syrup or what but I don’t like that texture.  Scott also said it was gritty.  I’m not giving up though, I’ll find something to do with it!

After that, then I went through and cleaned the house.  I’m getting the itch to start “spring cleaning”, you know, washing the windows.  Wiping down fans, baseboards, and that kind of thing.  I might start doing a little bit here and there instead of all in one big swoop.  After cleaning it was time for some lunch! 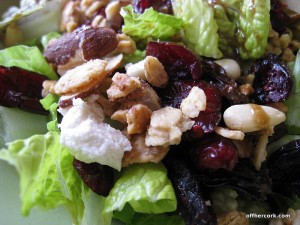 I had a salad with:

Topped with balsamic and oil. 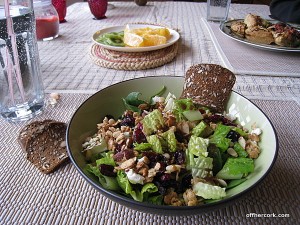 Also some seed crackers (3) and in the middle is a kiwi and an orange.  Scott said the kiwi went bad so I stayed away from it and had a few orange slices.  Lunch was good but I’m not content enough.  I may have to make a smoothie or something later.

Gotta get Rocks out for a walk and do some more things around here.  Happy Friday!