Warning: Parameter 2 to WPE\Site_Preview::the_posts() expected to be a reference, value given in /home/customer/www/foodembrace.com/public_html/wp-includes/class-wp-hook.php on line 303
 February 24th, 2009: Breakfast and lunch | Food Embrace

Hi guys!  Happy Tuesday!  Last night I got loads of reading time in because Scott was moving my office set up around for me.  It took him awhile and actually added to his crankiness.  When he was done and we were heading to the couch he said, “Not to be a bad influence or anything, but I’m having a beer.”  Awww my hunnies. 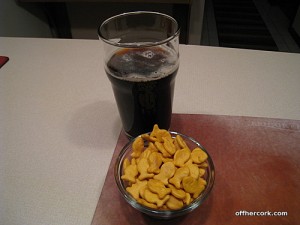 He had a honey porter and I pulled out some fishies because I was a little snacky.  I actually asked him to drink the honey porter so I guess I’m the bad influence! :p  He was going to have a Christmas Ale but I wanted a sip or two and my mouth was saying honey porter.  I had a few sips as we watched the first two periods of a Pens game and had a few fishies.  By 10:30 I was calling it a night.

Oh 6am on Tuesdays, why are you so early in the morning?  I had an Okay sleep last night, but there was some tossing and turning for a bit.  I woke up freezing and was so annoyed when I came downstairs.  Annoyed at the cold because I am so over cold.  I got Rocks taken care of and then came in to make a warm breakfast!  It was a toss up between oatbran or regular oats.  I was leaning more towards regular oats since I’m low on oatbran but at the last second I switched to the oatbran. 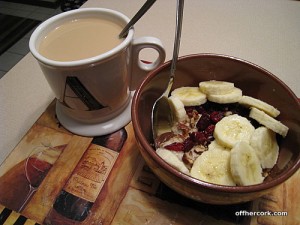 My mix-ins were sliced banana, cranberries, crushed pecans, and a small scoop of dark chocolate PB.  There’s also flax and protein powder added to the oatbran.  Along with morning coffee it was the perfect warm breakfast.

I started eating it and noticed an odd taste.  I’m not sure how to describe it but it was icky.  I finally realized it was the pecans! :o  I wonder if they’ve turned?  I actually had to stop eating it because the taste was so off.  However I wasn’t bummed for too long because it was light out before 7:30am this morning!

That meant I could get my run started sooner!  I almost didn’t go because I didn’t want to run in the cold.  Remember how I used to be all into running in the cold?  And before, at 13F I would be all, “Whatever. Let’s go!”  And now at 13F, I’m like, “Dude that’s effing cold.”  Apparently my love for cold weather running is not ever lasting.  I’ve got a good two months in me before I’m done with the super cold.  I changed and put my gear on before I could talk too negatively to myself.

Thankfully there was no wind so 13F really wasn’t so bad this morning.  I decided to challenge myself and push myself hard for 3.5 miles.  I wanted my HR up and I wanted to get this distance done in the 30 some minute range.  Normally 3.5 miles takes me 40 minutes.  I know, I’m a slow ass.  But it’s time for that to change and that’s not going to happen unless I push myself.  And I did, I was busting out this run.  I got so warm that I unzipped my cold weather jacket most of the way.  I probably could have ran in just my hoodie.  I did that run in 37 minutes.  Not too shabby and in the 30s so I was feeling good about the run.

Actually I was feeling good in general.  The problem with cold weather can be that it has the potential to slow me down due to many factors.  Really cold weather slows me down.  If there’s wind, that definitely slows me down.  And if it’s icy or super snowy, of course that’s going to affect my time.  Today it was just cold but tolerable so I tried not to let it affect my run in any way which is why I was able to do 37 minutes. 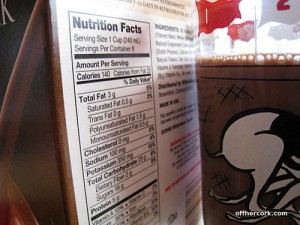 I had some CS and did some quick yoga stretches on my own.  Then I hit the shower!  I did some bloggy stuff and I really wanted a little bit more coffee but I resisted.  Sunday and yesterday I had about another 1/4 mug of coffee.  I don’t want to get in that habit because I don’t want that extra caffeine in my system.  So today I did not go back in for more.  Instead I made tea. 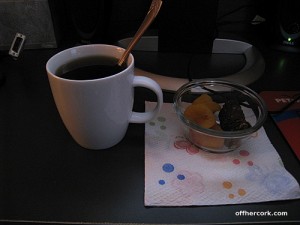 Peppermint tea with 1/2 a chocolate z bar and some apricots.  I only had two of the apricots but the rest of everything else.  I did more bloggy stuff and work for a while.  Then it was time to make some lunch. 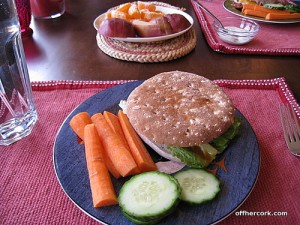 I had a morningstar chik’n patty on a sandwich thin with romaine and some buffalo sauce.  Also some carrots and cucumbers on the side and a sliced red pear.  I had about 3/4 of the pear.  After lunch it was back outside to take Rocky for a quick walk.  The wind had picked up by this time or else it would have been longer.

More chores and things await!  Catch you for dinner! 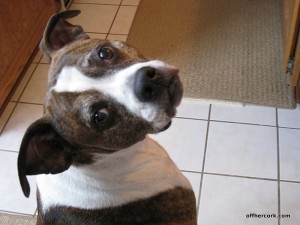 Oh were you talking to me?