Warning: Parameter 2 to WPE\Site_Preview::the_posts() expected to be a reference, value given in /home/customer/www/foodembrace.com/public_html/wp-includes/class-wp-hook.php on line 303
 February 20th, 2009: Dinner | Food Embrace

Hi guys!  I promise to try not to make this a habit!  Last night after we were done with dinner it was 9:30. :o

I convinced Scott to go with me on Rocky’s walking thinking I would have a nice companion for the longish walk.  Not so much.  It was freaking cold outside and the wind was blowing, making for an unpleasant time leaving all of us just wanting to go home. :p  So the walk was a shorter one.  Then I chilled my brain and read for a bit.  Then the fun started!  A package had arrived Thursday that I forgot to mention.  On the sly, Scott ordered Lego Batman and it arrived on Thursday!

So we started playing that and it’s just too cute. 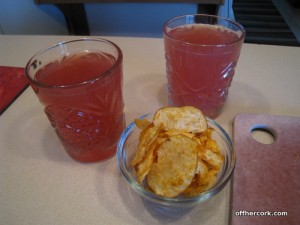 We took a short break for a drink.  Cranberry+Limeade+Selzter Fizzie and some baked BBQ chips.  I didn’t even need this snack. I wasn’t hungry in the least, my mouth was just bored.  I had a few chips, five?  And then stopped myself.  Then it was back to playing.  My one frustration with Lego Batman is that you can’t get to everything in the level and it’s designed that way on purpose.  After winning a level, you unlock “freeplay” which will allow you to go back to that level at anytime and use any suit or gear that you’ve collected so far.  Which is clever and definitely makes the game more fun, more replayable, and interesting.  However it is killing my Type A personality of, “Must clear level entirely!”.

We played for a bit then it was time for dinner.  Junk food guys, I’m not even going to front. 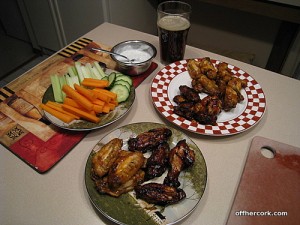 We had wings, BBQ and hot.  With veggies on the side (carrots, cucumbers, celery) to dip in ranch made with fage.  I had 8 wings, four of each, and it was two wings too much.  A few veggies mostly straight up, I think I might have dipped once.  Scott had that Irish Red back there while I stuck with water.  Sometimes when you make something to eat, you just totally knock it out of the park.  These wings were awesome.  I totally rocked them.  And yes I wrote down what I did, so I can post it later.  Wheee!  We watched a Pens game while we ate and finished it.  Then we watched a BSG which wasn’t a bad episode. Finally!

Then I headed up to bed to read and read until midnight because I was trying to finish my book.  And I did!  But now I’m on the edge waiting for the next one which needs ordered.  There are five in the series and the 5th isn’t out yet.  Eeep!